Jupiter from a height 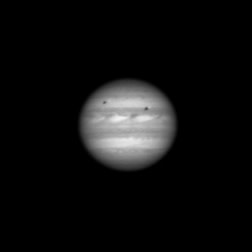 If you said "Jupiter", then give yourself a pat on the back. But if you said "That's just Jupiter" then kick yourself in the butt. That ain't just Jupiter. That's Jupiter as seen from the New Horizons spacecraft, screaming past it at 75,000 kph and from a distance of nearly 300 million kilometers. That's cool. What's cooler is that the camera on the probe is designed to look at Pluto, which is pretty faint. Jupiter is many things, but faint it ain't (hey, I got to use that word twice in one blog entry). So this picture was snapped with an exposure time of just 6 milliseconds. 0.006 seconds. That's cool too. This image isn't any better than what you can do from terra firma with decent equipment, but New Horizons is still a ways off from Jupiter. For a final touch of cool, New Horizons is going to use Jupiter to accelerate and change its orbit, getting it to Pluto much faster than otherwise. The close encounter of the jovian kind will happen on February 28, 2007. I expect we'll be getting some more amazing pictures by then, too. Oh-- the black spots on Jupiter are not evidence that NASA is turning Jupiter into a star. They are shadows of the moons Europa (left) and Io (right) on the cloud tops. The moons are just visible there too.