You'll never lose your way in the summer sky – even out in the boondocks – with these three stars to guide you. 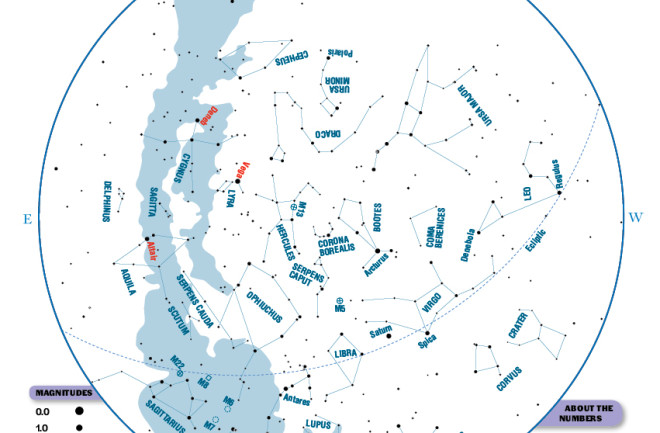 One of the most shocking things about a dark country sky is how disorienting it is: The brain has a difficult time finding recognizable patterns in the multitude of stars. Urban skies are much easier to read, reduced to their brightest, most distinctive elements. Fifteen minutes is all you need to learn your way around the city stars of summer.

The key is a grouping of three stars now rising in the eastern sky, opposite the setting sun. The highest and brightest is Vega. To the left is Deneb, surrounded by dimmer stars that form a large, loose cross. To the right is Altair, tightly flanked by two fainter stars. Collectively, the three form a pattern called the Summer Triangle.

Each night through the summer months they rise a little earlier and appear to reach higher. When the Triangle is well above the horizon (around 11 p.m. this month), its long end, with Altair at the tip, faces almost due south, making it easy to get your bearings.

Look farther south and a bit left, and you’ll see ruddy Antares, which roughly marks the direction toward the center of our galaxy. Turn left and you are facing east, where beautiful, orangish Arcturus is high but sinking as the Triangle rises. Turn left again, and you are pointed north, with the Big Dipper balancing vertically on its bowl. Now you are fully oriented — no GPS required.