Keep your eyes on the skies during World UFO day. 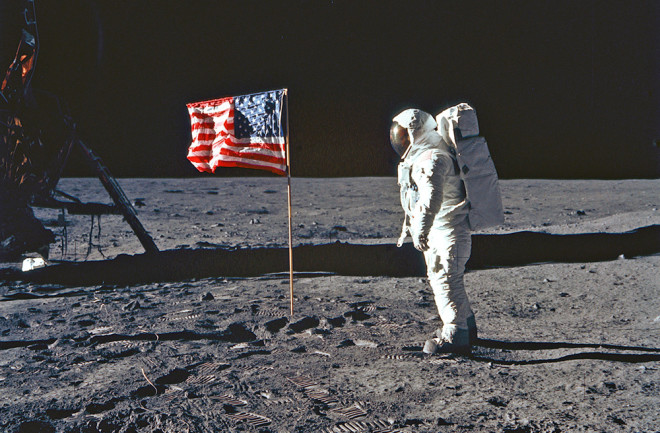 July 20 marks the 45th anniversary of the first manned landing on the moon. | NASA

July 4: Cutting the cake in honor of the late cartoonist and inventor Rube Goldberg should require at least 12 steps, including a mousetrap, a cuckoo clock, a robotic leg in a boot and a hamster running on a wheel.

July 9: Halle Berry plays Molly Watts, an astronaut who struggles with life on Earth in the premiere of the new CBS series Extant. She’s been alone in space for a year, and the course of human history is rapidly changing. Also, her kid is an android.

July 12: Commercial use of Morse code ended in the U.S. in 1999; the Maritime Radio Historical Society welcomes the public to help commemorate the event at a historic, Marconi-era station along California’s Point Reyes National Seashore.

July 12-13: Join rangers and volunteers at Saratoga National Historical Park as they forge, stitch, hammer and snip their way through re-creating the trades that supplied the Continental Army.

July 29: The Delta Aquariids meteor shower peaks in the hours before dawn in a nearly dark southern sky, unhampered by a moon only a few days into its waxing phase.

July 31: The New York Academy of Sciences hosts a symposium on “Fifty Years of the Genetic Code,” highlighting advances since 1964.