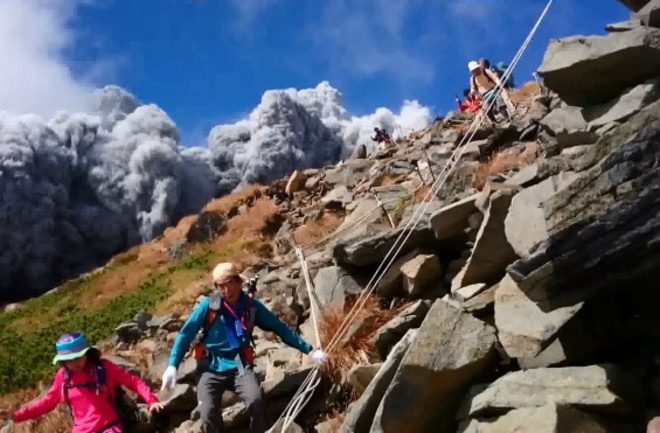 Hikers trying to escape from the unexpected eruption on Ontake in Japan on September 27, 2014. Photo by YouTube (Kuroda Terutoshi) video capture Today, Ontake (also known as Ontakesan) erupted unexpectedly trapping hundreds of people who were hiking on Japan's second tallest volcano. The eruption appears to have been highly explosive, with pyroclastic flows and an ash column that topped over 5.5 kilometers (18,000 feet). You can see some stunning video of the pyroclastic flows roaring down the valleys on the side of the volcano. It appears that this had to be a fairly large eruption to produce the massive pyroclastic flows captured in the video (although scale is a little hard to discern; see below). UPDATE 1:15 PM EDT: First take on the eruption from Dr. Koshun Yamaoka from Nagoya University is that it may have been a phreatic (steam-driven) eruption. From what I've seen, it seems big to be purely phreatic so I wouldn't be surprised if we find that new magma was involved as well. I was confused that Dr. Yamaoka mentioned eruptions from Ontake in 1991 and 2007 - neither appear in the Global Volcanism Program database. It also appears that most hikers have been rescued from the slopes of the volcano as well, with at least 40 people injured and 7 missing so far. At least one person has died as well. Be sure to check out this great video of the eruption as well. Ash is falling around the entire region and the BBC has some startling images of buildings on the volcano covered in thick white ash. Hikers near the summit have been trapped since the eruption began although some are apparently trying to hike down as the evening falls. Japanese Prime Minister Shinzo Abe has ordered the military to stage a rescue of the remaining hikers trapped on the volcano.

Pyroclastic flows from the September 28, 2014 eruption on Ontake in Japan. Photo by Video capture, Japan News.Videos taken by hikers are straight out of a disaster films, with pyroclastic flows looming above the hikers has they try to run downslope. So far, only 8 injuries are reported from the explosive eruption, but with the number of hikers on the volcano at the time of the event, I wouldn't be surprised to see that number climb. UPDATE: At least one fatality now. You can see several images of the eruption from different vantage points in this article along with a compilation of Tweets over on io9. Air traffic was also diverted from near the volcano. Ontake last erupted in 1980, which was a small VEI 1 eruption near the summit. Beyond this, there aren't many known historic eruptions from the volcano and some of that overall quiet is likely why the volcano is one of the most popular mountains to hike in Japan. Although Japan has one of the most extensive and modern volcano monitoring systems in the world, this eruption appears to have caught everyone off guard as the alert status at Ontake was at its lowest when the eruption occurred (it has now been raised to 3 on a scale of 5). I'll try to update this periodically as new information emerges. There appears to be webcam pointed at Ontake as well.