Japanese Probe Makes It Home! But Did It Collect Any Asteroid Dust? 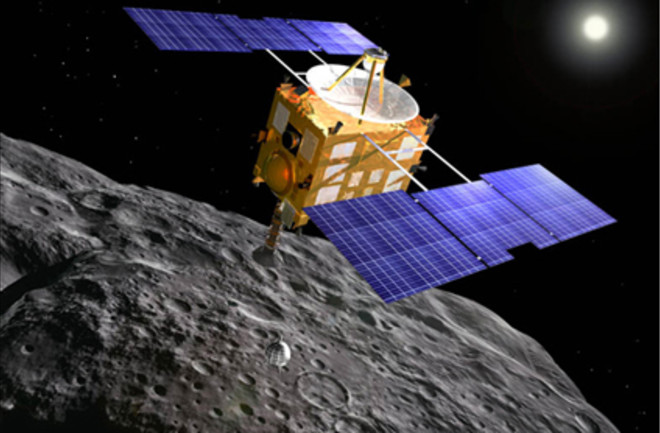 You try coming home on time after traveling four billion miles. Three years after its initially scheduled return date, Japan's Hayabusa spacecraft returned to Earth yesterday and dropped its collection canister in the Australian outback. The team from JAXA, Japan's space agency, hopes that the container holds samples from Hayabusa' 2005 landing on an asteroid called Itokawa. They won't know for sure for a couple weeks, but Hayabusa has already made history by landing on an asteroid and returning to Earth.

(Check out DISCOVER blogger Phil Plait's post featuring video footage of Hayabusa's return in which the probe breaks up into a spectacular flash.)

The headline on JAXA's website currently reads, "Welcome back HAYABUSA to Earth after overcoming various difficulties!" That's putting it mildly:

Hayabusa was originally due to return to Earth in 2007 but a series of technical glitches — including a deterioration of its ion engines, broken control wheels, and the malfunctioning of electricity-storing batteries — forced it to miss its window to maneuver into the Earth's orbit until this year [AP].

And there are no guarantees the craft got any samples. When Hayabusa landed on the asteroid, it was supposed to fire a projectile into the surface. The idea was that this would kick up enough dust for the spacecraft to grab with its collector, but nobody knows whether or not that actually worked. If it didn't, researchers say there's still a good chance that Hayabusa brought home asteroid samples:

"It may have worked, it may not; we just don't know," said Dr Michael Zolensky from NASA's Johnson Space Center. "But even if it didn't work, the spacecraft landed for half an hour on the surface, and during that landing -- it was a hard landing -- it should have collected a sample even without firing anything. So, we're pretty confident there'll be something inside the spacecraft" [BBC News].

The sample container crashed down in an Australian military zone called the Woomera Prohibited Area, where helicopters spotted it after about an hour of looking. Japanese, Australian, and American scientists are preparing the container for its trip to Tokyo. Fingers crossed for the little spacecraft that could: If it did return asteroid dust, it would be the first to do so. (NASA's Stardust mission

has brought comet samples home before, and of course the Apollo Astronauts returned with moon rocks

80beats: Japan's Damaged Asteroid Probe Could Limp Back to Earth in June