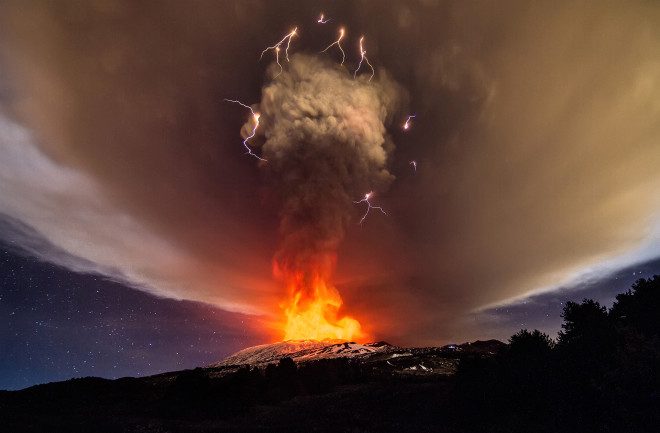 Mount Etna erupts on December 3, 2015. Marco Restivo/Demotix/Corbis After what has been a quiet 2015, Etna saw one of its first paroxysms of the year. Over the last few weeks, the Voragina crater on Etna has been restless, with low level Strombolian activity that was mainly confined to the crater. However, last night, the Voragine crater unleashed a lava fountain that reached 1 kilometer (~3,200 feet) over the volcano with an accompanying ash plume that topped 3 kilometers (~9,800 feet). Even with all that intensity of eruption, the paroxysm was over in only 50 minutes. By this morning, only a thin, white plume was coming from Etna, although some of the ash plume was still visible to the east over the sea (see above).

A thin, wispy plume is all that is left of last night's paroxysm at Italy's Etna. Some of the plume from the eruption is seen to the east (right) over the ocean. Acquired December 3, 2015 via Aqua/MODIS.

Some stunning pictures were captured of this brief eruption (admittedly helped by some clever time lapse), but they show the lava fountain and the spreading ash plume as well. The plume was also spotted by weather satellites as well (see below), puffing upwards and then drifting to the northeast.

This was Etna's first significant eruption since May 2015

, when the activity was centered at the New Southeast Crater, but the Voragine Crater had been sputtering lava occasionally since the start of the year. If Etna rumbles back to life again, you might be able to catch it on one of INGV's many webcams