Inside the World of Stephen Hawking

The world's most famous theoretical physicist will make you think—and laugh. 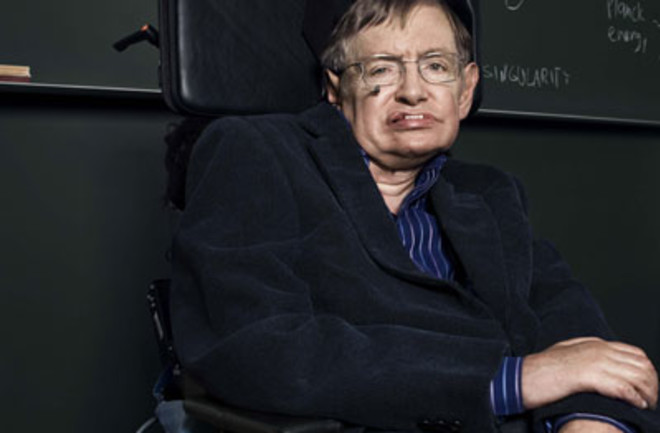 Stephen Hawking arrived for his DISCOVER photo shoot bearing a familiar look: corduroy jacket, dark blue shirt, and a wisp of a sly smile. Even though he is mostly paralyzed due to amyotrophic lateral sclerosis (ALS), he has no trouble making himself understood. In part he relies on an infrared switch attached to his wheelchair, which enables him to write and to talk through a voice synthesizer. But even with his restricted body motions, Hawking’s thoughts come across clearly. Every arch of his eyebrows and roll of the eyes carries as much meaning as another person’s torrent of words.

One thing Hawking cannot do is jot notes on a blackboard, which left DISCOVER’s executive editor, Corey S. Powell, scrambling to illustrate the renowned physicist’s ideas for the photographer. Fortunately Hawking has written a number of remarkably accessible popular books, including A Brief History of Time. Spend a little time in Hawking’s world and you, too, will be able to sketch the effects of a black hole on the structure of subatomic space.

Hawking has made critical contributions to cosmology and quantum grav­ity, but his work on black holes remains his most famous. Black holes were once regarded as one-way paths to oblivion because of their tremendous gravitational fields that, the theory went, allowed nothing—not even light—to escape. Hawking realized that the universe is not so tidy. Black holes can also send stuff back out, emitting radiation that is, in a sense, plucked from empty space. That process, now known as Hawking radiation, explains why we do not have to fear any mini black holes created by the Large Hadron Collider; they would “evaporate” into radiation almost instantly.

The Lucasian Professor of Mathematics at the University of Cambridge, Hawking is far less stuffy than that august title might suggest. He has played himself in cartoon form in several episodes of The Simpsons. In 2009 he plans to take a daredevil flight on Virgin Galactic’s new space-tourism service. And even his serious statements have an air of sardonic wit. Last April, in a lecture honoring NASA’s 50th anniversary, he addressed the possibility of extraterrestrial life. “Primitive life is relatively common,” he said, “but intelligent life is very rare.”

An appreciation of Hawking by Michio Kaku, profes­sor of theoretical physics, City College of New York, and author of

Physics of the Impossible:

Perhaps the greatest problem in all of physics is to unify the quantum theory with Einstein’s theory of gravity, thereby creating a “theory of everything” that would allow us to “read the mind of God,” as Einstein once wrote. Such a theory would answer some of our deepest questions, such as: What happened before the Big Bang? Are there parallel universes? Is time travel possible? What lies inside a black hole? Stephen has made some of the biggest breakthroughs in this area, showing that quantum effects can allow black holes to emit radiation, so black holes are actually gray.

I once spoke at Cambridge University at a conference organized by Stephen and had the chance to visit his house. I noticed various contraptions in the living room to help him cope with his illness. There was, for example, an automatic page turner. You put a physics journal in it, and it grabs a page and turns it for you. And then a thought passed through my head that made me shudder. What kind of ferocious mental power can enable him to be so active in research while losing the power of practically every muscle in his body? I asked myself: Would I trade places with him? I could become instantly famous, but I would pay the price of losing control of my own body.