A Spaceport for Treehuggers

Can a green building offset the potentially giant impact of spaceflight? 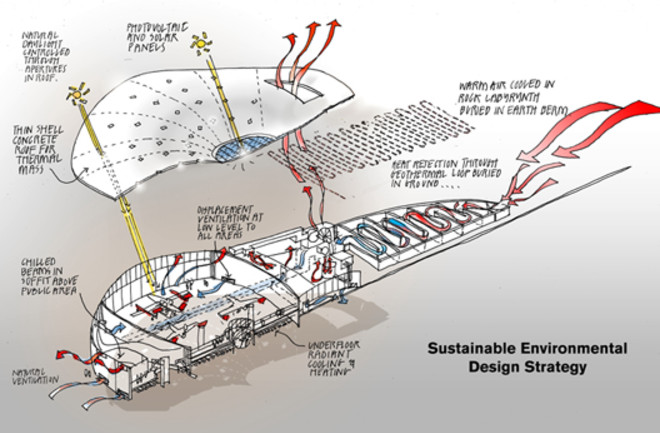 Starting in 2009, tourists with deep pockets will be able to enjoy something fewer than 500 people have been lucky enough to experience—spaceflight. For $200,000, if all goes well, they can orbit for two and a half hours in Virgin Galactic’s SpaceShipTwo. But the port for landing and takeoff—Spaceport America in New Mexico—will also be sensitive to the needs of those stuck on Earth. The plans, revealed in September, show a teardrop-shaped building with high-tech ventilation systems, solar panels, and massive windows, all features that could earn it top certification for efficiency and energy savings by the U.S. Green Building Council. The port’s designer, Norman Foster, founder of Foster + Partners, says it will be “an ecologically sound model for future Spaceports.” For a place that may launch two rockets out of the atmosphere each day, will solar panels and natural light really make a difference in its environmental impact? What amount of carbon emissions are involved in space travel anyway?

One trip in SpaceShipTwo along with its launch vehicle, WhiteKnightTwo, has a carbon footprint equal to that of one business-class passenger flying round-trip between New York and London, says Virgin Galactic president Will Whitehorn. By 2011, the company expects to be launching two flights a day. Although no firm figures for carbon dioxide emissions are available for SpaceShipTwo, a single NASA space shuttle launch produces 28 tons of carbon dioxide. With two space shuttle launches per year, on average, that amounts to roughly 5 tons of carbon dioxide per month (by comparison, your average car generates about half a ton per month). Where the numbers really pile up is in the operation of Kennedy Space Center, which includes pumping 300,000 gallons of water to protect the shuttle from launch vibrations, moving the rockets, and keeping hundreds of tons of liquid oxygen and hydrogen cool. That makes for a monthly carbon footprint over 900 times that given off by the shuttle’s solid rocket boosters in one launch. Furthermore, 23 tons of harmful particulate matter settle around the launch area each liftoff, and nearly 13 tons of hydrochloric acid kill fish and plants within half a mile of the site. In all, the environmental cost per launch is the same as that of New York City over a weekend, Whitehorn says.

Still, the expected impact of spaceflight pales in comparison with the carbon footprint of a commercial airport. Los Angeles International Airport has carbon dioxide emissions of nearly 19,000 tons a month, taking into account the use of electricity and natural gas. Meanwhile, the roughly 33,000 airplanes that fly in and out of the airport each month emit about 800,000 tons of carbon dioxide.