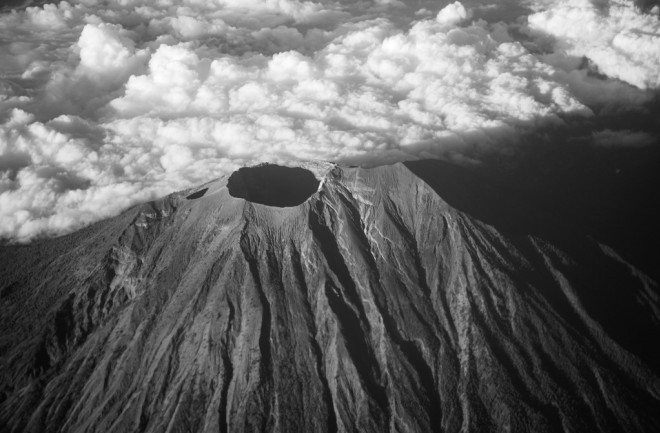 The summit of Agung in Indonesia, seen in 2015. Bambang Suryobroto / CC by 2.0 A volcano that produced Indonesia's largest eruption of the 20th century has been elevated to the country's highest alert because of increasing unrest. As a result, tens of thousands of people have started evacuating the area near Agung on the island of Bali with memories of the 1963 eruption that killed over 1,200 people. UPDATE 9/25: The number of evacuees now sits close to 50,000. You can read a first-hand account of evacuating the area near Agung -- it captures the fear, apprehension and uncertainty of the event so far. Most of the unrest has been a persistent and increasing earthquake swarm (see below) under the volcano that started around September 19. These swarms of relatively small earthquakes can be signs that magma is moving into the upper parts of the volcano or that the system of water that circulates under the volcano may be heating up from magma rising and heating the rocks. Steam-and-gas emissions (but no ash so far) have also increased at Agung, so when combined, these two signs point towards a growing potential for an eruption. UPDATE 9/25: The PVMBG thinks that the seismic signal suggest magma moving upwards into the volcano as the earthquakes have increased.

You can see that the seismicity has fluctuated a bit, but is still high. pic.twitter.com/UuOxCmmbmA

The 1963 eruption of Agung was big

, which is on the same scale as the 1980 eruption of Mount St. Helens. The volcano has a history of eruptions

of this scale, with another VEI 5 eruption that produced pyroclastic flows, lots of ash fall and some lava flows in 1843. The 1963 eruption also emitted lots of sulfur dioxide and chlorine

into the atmosphere, which caused a brief global cooling

over the next year. Volcanic hazard maps for the area around Agung (below) show the widespread threat the volcano poses from coast to coast on Bali.

Most of the direct hazard comes from pyroclastic flows (hot torrents of volcanic debris) in the yellow and red regions while mudflows could move through the river valleys leading from Agung (green). This volcano has captured the media's attention in Indonesia and lots of rumors are flying about what might happen and when it might happen. The PVMBG

had to issue a statement today

refuting claims that the volcano will erupt on the night of September 25. This prediction appears to be generated out of fearmongering rather than any evidence at the volcano. The same can be said for the potential that an Agung eruption might cause a tsunami -- this is very unlikely as the volcano is not on the coast and will not likely produce anything that could reach the ocean to cause a tsunami, such as a landslide or large pyroclastic flow. There are also reports of monkeys and snakes fleeing the volcano

, which are likely unfounded rumors as animals do not know when the volcano will erupt. Bali is a tourist destination as well, so many travelers are watching the volcano

to see how there plans might be disrupted. However, this is small fry compared to the 4.5 million people who live within 100 kilometers of Agung and nearly 1 million that live within 30 kilometers. Now, most of those people won't need to evacuate, but they will likely need to be ready for ash fall or contaminated water/food if the volcano has a significant eruption. That being said, much like Sinabung

, eruptions from Agung will likely displace hundreds of thousands of people for weeks to months (or longer). Many people have already been moved to temporary shelters

. Officials have closed tourist spots near the volcano

to try to limit the potential casualties of an eruption. Locals are also moving livestock

from the area as to protect their livelihood in the event of an eruption. Indonesia officials are also preparing local and regional airports for potential disruptions

from ash of an Agung eruption. All in all, the situation at Agung is worth watching closely as it has a history of large eruptions and lots of people living near the volcano -- the sort of crisis Indonesia deals with frequently with its dozens of potentially active volcanoes.

{Special thanks to Dr. Janine Krippner for tweeting many of the links in this post.}