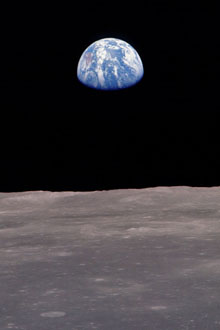 Early tomorrow morning, India will launch its first lunar satellite, making it the sixth country to do so, following the United States, Russia, the European Space Agency, China, and Japan.

The lunar-orbiting spacecraft, Chandrayaan-1, is scheduled to blast off aboard an Indian-built rocket at 6:20 am (0050 GMT) on Wednesday from the Satish Dhawan Space Centre in Sriharikota on India's southeastern coast [AFP].

If all goes to plan, the satellite, weighing half a [metric] tonne, will enter a lunar orbit some 62 miles above the moon's surface on November 8 and begin its two-year mission to map the moon in 3D, survey its surface for mineral wealth and start its 11 hi-tech probes, including five from the US, Sweden, Japan, Germany and Bulgaria [Guardian]

Specifically, Chandrayaan-1 will be looking for uranium, helium-3 (used for nuclear fusion), and water ice. Although the unmanned spacecraft itself will not land on the moon, it will eject a small craft to land on and investigate the lunar surface.

The mission will cost India $80 million, which seems a bargain

The launch may also lead to lucrative commercial deals with countries who do not yet have the capability to launch their own satellites. Nevertheless,

some Indian development policy analysts question whether the money might be better spent on tackling India's myriad social needs. "They asked the same question when we built our first satellite, Aryabhatta, in the '70s," notes Mylswamy Annadurai, Chandrayaan project director [New Scientist]

—presumably in disagreement. India already has a dozen satellites orbiting Earth, but Chandrayaan-1 will be its first to blast outside Earth's gravitational pull.

The launch adds a third contender to the purported Asian space race, and there is no doubt that Chandrayaan-1 is a point of national pride for India: At the suggestion of Abdul Kalam, former Indian President,

the impactor will also be painted with the Indian flag and thereby, symbolically, it will be "planted" on to the Moon [BBC News].

Related Content: DISCOVER: Can We Survive on the Moon? DISCOVER: One Giant Step for a Small, Crowded Country 80beats: New Race to the Moon Could Bring Permanent Bases and Observatories 80beats: The Moon Once Held Water, Moon Pebbles Show