Incredible VISTA of the cosmos

Astronomers with the European Southern Observatory have just revealed the first images from their new telescope called VISTA: the Visible and Infrared Survey Telescope for Astronomy. If ever there was an appropriate name for a 'scope, that's it. Why? Here's why: 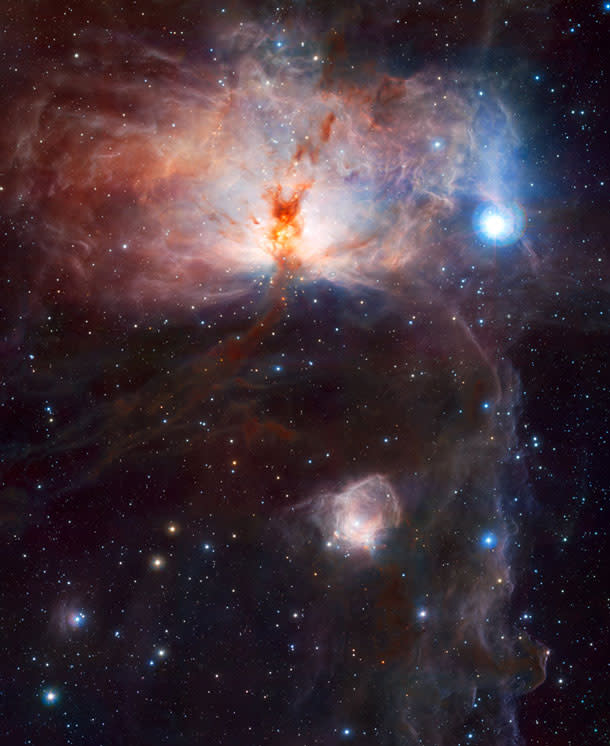 Oh baby. Yeah, click it to embiggen. This image is of the Flame Nebula, a star forming gas cloud in Orion. The image itself covers about half a square degree on the sky (twice the area of the full Moon) and shows details of the nebula, including the core made up of stars invisible to optical telescopes. The bright star in the image is the monster blue supergiant Alnitak, which is the easternmost (left, to northern observers) star in Orion's belt. Get a good look at it, because in a million years or so that star is gonna blow. Can you spot the famous Horsehead Nebula in this picture? It looks a little different than you usually see it, because VISTA operates in the visible and near-infrared. It uses a 4.1 meter mirror (that's big, folks) to suck down light from the sky. It is extremely sensitive and produces very high-resolution images... as you'd expect from a 'scope that has a 67 million pixel detector. That's so many pixels you'd think they'd make an image you could zoom into. Oh wait: they did. You'll have some fun playing with that; in fact, if you spend more than 14 minutes playing with it you'll have spent longer than it took to take this image! That's right, that gorgeous shot is only a 14 minute exposure. 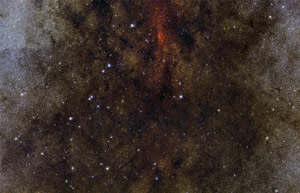 Here's another phenomenal picture. It's an amazing 2 x 1.5 degree field toward the center of the Milky Way, revealing about a million stars! It's taken completely in the near infrared, just outside of what the human eye can see, and shows dust and stars mostly invisible in optical light. As you can see, the center of our Galaxy is a mess. Getting images in different wavelengths of light allows us to get a better handle on what's happening in this incredibly crowded volume of space. And yeah, this image is zoomable too. You absolutely want to take that little tour; I literally gasped when I saw it. 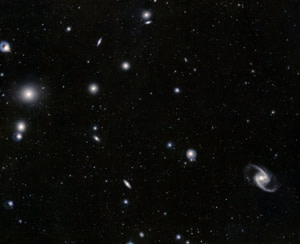 There's also this very pretty shot of the Fornax galaxy cluster, a collection of galaxies 60 million light years away. This 25 minute exposure captures quite a few galaxies. Like before, it's shots like this that help scientists get a handle on not just individual objects, but the environment in which they live, too. If you want to see that environment for yourself, why, tour the zoomable image. 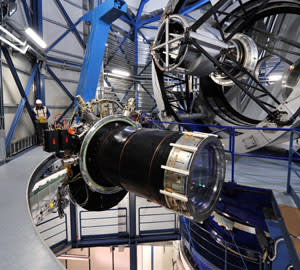 Finally, let me leave you with this remarkable photo, showing the VISTA camera itself. Note the dude standing on the left. VISTA is huge! It weighs three tons, and I suspect most of that is the support equipment for it, including a dewar that holds the liquid nitrogen needed to cool the detector down to -200° C. See the glass in the front? That's the largest IR-transparent window ever created. It's hard to believe that such a hulking camera can take such fine, detailed images, but that's how these things work. A lot of times in astronomy, bigger is better... especially when it allows us to take such deep images of the cosmos. Credits: Credit: ESO/J. Emerson/VISTA. Acknowledgment: Cambridge Astronomical Survey Unit; ESO/Y. Beletsky.