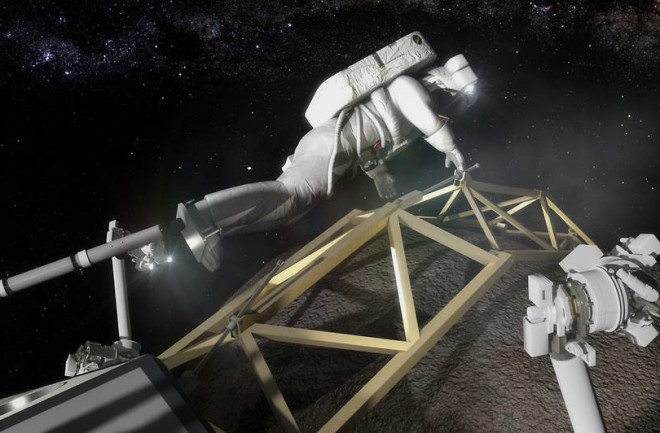 An astronaut examines an asteroid pieced into orbit around the moon in this NASA illustration. Target date for the rendezvous: 2025. If you pay attention to news about space exploration, you may have seen some skeptical stories about NASA's proposed Asteroid Redirect Mission. (And even if you don't follow such things, you might well have been dismayed by headlines announcing a "less ambitious asteroid mission" that is "unlikely to get funded.") This is not another one of them. I think the asteroid mission is a cool idea, and an important one. I think it will advance the cause of space exploration in several meaningful ways. And it is exactly the kind of medium-scale, focused mission that could revitalize the whole idea of sending humans on grand adventures beyond Earth orbit--if only it can make its way past the naysayers, political opponents, and misguided scientific skeptics who threaten to derail it before it even gets started. A little background first. The Asteroid Redirect Mission--everyone calls it ARM, because NASA loves to reduce everything to an acronym--grew out of a 2011 study by the Keck Institute for Space Science. The concept was both clever and expedient. NASA is developing a huge rocket, called the Space Launch System (yep: SLS), designed to carry humans on new deep-space voyages, but so far it has nowhere to go. It is a rocket without a destination. In theory, SLS is supposed to take humans to Mars, but the government has provided no funding for the necessary technical infrastructure, much less for the actual cost of such a lengthy, dangerous, and complicated mission. The Obama administration suggested a human voyage to an asteroid as an intermediate step, but even that would be an expensive, multi-month voyage--one that is, again, notably lacking any financial support. Where, then, to go? The Asteroid Redirect Mission answers that question in a novel way. Instead of taking humans to an asteroid, it would do most of the work robotically (and at much lower cost) by bringing the asteroid most of the way to us. In the original plan, ARM would send a collector spacecraft to a small asteroid, no more than 5 meters [15 feet] wide, and tow it to a local orbit around the moon. Then the SLS rocket would ferry a crew to the asteroid, where they would analyze it, collect samples, and bring them back to Earth. NASA's revised concept, announced earlier this week, still follows the same outline, but with one notable difference. Instead of grabbing and towing a tiny, solitary asteroid, the ARM spacecraft will now cozy up to a much larger object, pluck a large boulder off its surface, and bring that back to lunar orbit. The rest of the plan would unfold as before. The scientific return would probably be much the same as well. Many small asteroids are probably broken-off bits of larger ones, so a surface boulder on a larger asteroid might turn out to be pretty much the same type of object as the original target.

Looking like a vending-machine claw, the Asteroid Redirect Vehicle snatches a large rock off the surface of an asteroid. This part of the mission is scheduled for 2022. (Credit: NASA) There are a bunch of reasons to like the Asteroid Redirect Mission: ° It will advance our understanding of the solar system. Asteroids are time capsules that record a highly revealing early stage in the formation of the planets. Unmanned space probes have examined a number of asteroids up close, but the only sample-return mission (Japan's Hayabusa) largely failed to deliver. Japan is trying again with Hayabusa 2, and NASA is preparing its own asteroid sampler, called OSIRIS-REx. But ARM would collect a sample on a vastly larger scale than has ever been attempted before. Just getting to know the target asteroid (potentially a carbon-rich, 400-meter-wide object called 2008 EV5) will be a great learning experience. And if the boulder proves geologically and chemically interesting, we can return to it again and again. ° It will advance space propulsion. This may be the most under-noticed benefit of the ARM proposal. To reach the target asteroid and tow the boulder home, NASA wants to develop a new, high-power solar-electric space engine. This engine would be conceptually similar to the ion drive that propelled the Dawn spacecraft to Ceres, but far more powerful. Combining the ARM propulsion module with an SLS rocket would make it possible to send large, complex space probes on high-speed trajectories to Jupiter, Saturn, Uranus, and Neptune. At a recent NASA conference, Nathan Strange of JPL described in detail the enormous scientific potential of such a combination.

NASA is developing a powerful Solar Electric Propulsion rocket (using ions instead of burning chemicals) to ferry the asteroid boulder. The same technology could greatly speed the exploration of the outer solar system. (Credit: NASA) ° It will take humans to an exciting destination. Since the ending of the Apollo program, no human has ventured above low-Earth orbit. ARM will take astronauts to the moon and one step beyond. It's one small step, yes, but we all know what small steps can lead to. Nobody has ever attempted this kind of rendezvous before; the skills involved are very close to what would be needed for a crewed mission to a more distant asteroid, or to the moons of Mars. Touching an asteroid, and doing small-body geology in space, will be truly novel and elevating experiences. ° It will test technologies for asteroid defense. I'll admit, this is a somewhat weak and oversold rationale, but there is merit to it all the same. Gathering data about the inner structure of asteroids, refining techniques for tracking them and rendezvousing with them, and developing ways to grab and transport a large boulder are all broadly aligned with the kind of technology humans would need to avert a potential impact. ° It can actually happen. I can't believe I really need to make this point, but apparently I do. ARM is not a substitute for a moon base or a human mission to Mars, and it is not meant to be. It is a vastly cheaper undertaking, with a claimed price tag of $1.25 billion, as opposed to some undefined hundreds of billions of dollars to go to Mars. ARM could really happen within a decade; the current plan calls for a December, 2020 launch for the asteroid grabber and a 2025 target for the astronaut visit. Once humans are on an outward course again I suspect it will be much easier to build public support for incrementally more ambitious missions. The choice isn't between an asteroid or Mars; the choice is between an asteroid and nothing at all.

Asteroid 2008 DV5 is the likely destination of NASA's mission. This computer model of the 1200-foot-wide asteroid is based on radar studies. (Credit: NASA-JPL/S. Ostro) Now I'd like to take a quick look at some of the key objections I've heard about the asteroid mission. ° It will cost more than NASA says. That's possible. When you include the cost of the SLS rocket, in fact, it's a near certainty, especially considering that Space Shuttle flights were costing nearly $1 billion a flight toward the end. Some critics put the likely price tag of ARM at something more like $2.5 billion, or twice NASA's lowball figure. But this is a matter of hammering out a realistic budget (which was a focal point of the original Keck Institute study) and imposing tight controls on the project. Honestly, $2.5 billion is not an unreasonable price tag for a major crewed mission. That is still less than 1% the cost of going to Mars. ° An asteroid isn't really a stepping stone to Mars. There is a strange circularity to this argument: If we don't make plans to go beyond an asteroid, we won't have plans to go beyond an asteroid. True, yet meaningless. If going to an asteroid gets the human space program moving again, demonstrates new propulsion technologies, and establishes the capabilities of the new Orion space capsule and SLS rocket, then next steps (both for crewed and robotic exploration) will come more easily. That includes Mars, a moon base, or whatever destination the next administration chooses. ° There is no real constituency for an asteroid mission. Now we are getting to the dark realpolitik thinking that is working against the mission. The planetary science community doesn't like ARM because it is an exploration-driven mission that did not go through the kind of review process that guides science missions. The Mars-or-bust human spaceflight community considers ARM a diversion. The asteroid-science community is small and not very influential. ARM has no real constituency, then...except for everyone in the world who believes in the value of bold exploration and pushing the envelope of technology. ° A rendezvous with a space boulder is not inspirational. This is a self-fulfilling complaint. If enough people keep saying that the mission is boring and pointless, they can probably help establish that narrative. If we focus on the grand possibilities, though, a totally different narrative emerges. ARM is a first step toward rebuilding a human space program, on affordable and sustainable terms. It will help establish technology that would greatly benefit robotic exploration as well. It would put human hands on a 4.5-billion piece of our shared history. Not inspirational? Going to an asteroid can be a the beginning of a great new space romance--if only we let it unfold that way.

For more on the asteroid mission and other space news, follow me on Twitter:@coreyspowell