In a Test, NASA Just Intentionally Blew a Hole in the World's Largest Rocket

To prove their massive rocket could survive well beyond its intended limits, NASA blew a hole in its fuel tank. 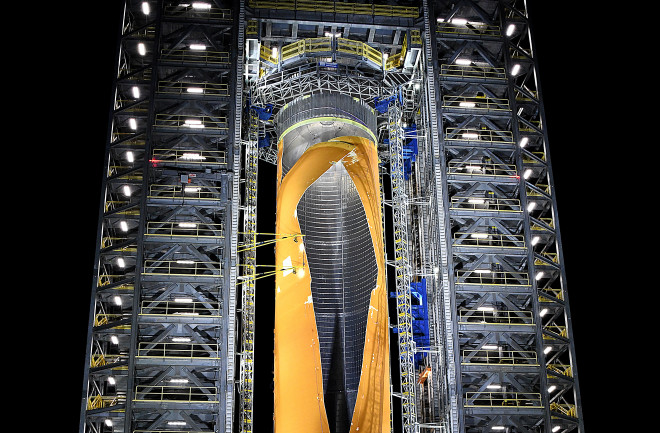 NASA's Space Launch System rocket tank sports a gaping new hole in its side thanks to a recent test. (Credit: NASA/Dennis Olive)

What should you do with your test rockets? Blow a hole in them of course! That’s what NASA did last week with their test version of the Space Launch System (SLS) rocket, the line of rockets that will take the next man and first woman to the moon by 2024.

“We purposely took this tank to its extreme limits and broke it because pushing systems to the point of failure gives us additional data to help us build rockets intelligently,” said NASA’s Stages Chief Engineer, Neil Otte, in a press release.

To measure the pressure and see how the tank would crack, thousands of sensors were fitted throughout the tank. Engineers expected it would buckle and eventually rupture, it was just a matter of when.

Engineers tested the liquid hydrogen tank by filling it with a combination of nitrogen gas and exposing it to high forces. The tank withstood more than 260 percent of expected flight loads over the course of five hours. That’s when engineers detected a buckling point, and a gaping hole erupted on the side. The test was a success.

The SLS rockets are the main launch vehicle currently commissioned for NASA’s Artemis missions, which the space agency intends to use to return to the moon.