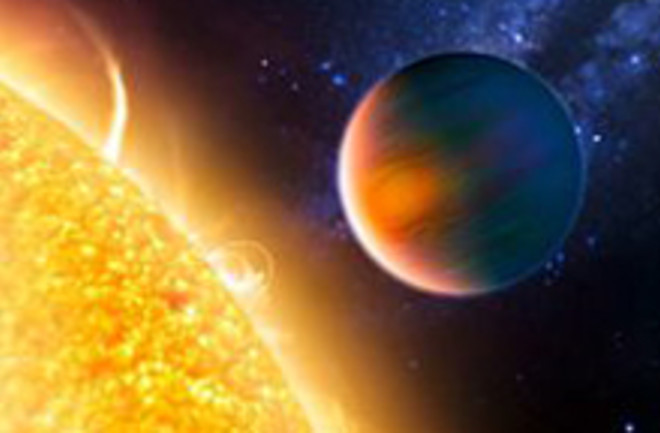 As the count of known planets in distant star systems continues to grow (the number now exceeds 400), so too does the number of ways we have to learn about them. Reporting in Nature this week, a team of astronomers say they have measured the makeup of an exoplanet's atmosphere using an Earth-based telescope for the first time. Mark Swain's team directed NASA's Infrared Telescope Facility toward HD 189733 b, a planet 63 light years away, discovered back in 2005.

. Swain's analysis confirmed those previous findings using spectrography, in which the light from an object is broken down into its component wavelengths,

allowing the identification of atoms or molecules by their unique emission or absorption properties [Scientific American].

Swain's team also turned up something else—a spike in emissions at a very particular wavelength of light, 3.3 microns, that the earlier observations didn't detect and that Swain's team can't explain--at least not yet. While these and other researchers will likely hurry to investigate the mystery spike, the really important part of Swain's study is that it shows it is indeed possible to analyze extremely distant planets from telescopes right here on Earth. To do it, they looked for what's called a secondary eclipse.

. However, our own atmosphere obscures this information, so Swain team had to study at the exoplanet in infrared and correct for the errors our own planet introduces. Despite showing signs of the molecules we associate with life, HD 189733 b isn't a good candidate for life as we know it. It's among the group called "hot Jupiters": gas giants orbiting scaldingly close to their stars. However, refining Swain's method could give astronomers another tool beyond space telescopes like the Kepler mission to search for a world that not only possesses the ingredients for life but also resides at an appropriate orbital distance. This approach