...apparently. A viewer sends this picture. The Australian Broadcasting Corporation is airing a talk I gave in March at the National Press Club in Canberra, as the keynote address for the Science Meets Parliament annual event hosted by the Federation of Australian Scientific and Technological Societies. 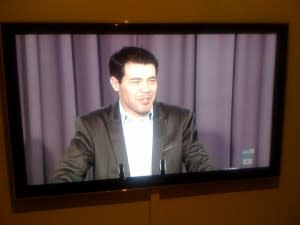 The talk, composed in a burst of inspiration on the flight across the Pacific, is one I've never given before or since--but I'm kinda proud of it. I am going to see if it will be available in any watchable format stateside, and then I may say some more about the subject matter.