If the Apollo 11 Astronauts Died, Here’s the Speech Nixon Would Have Read 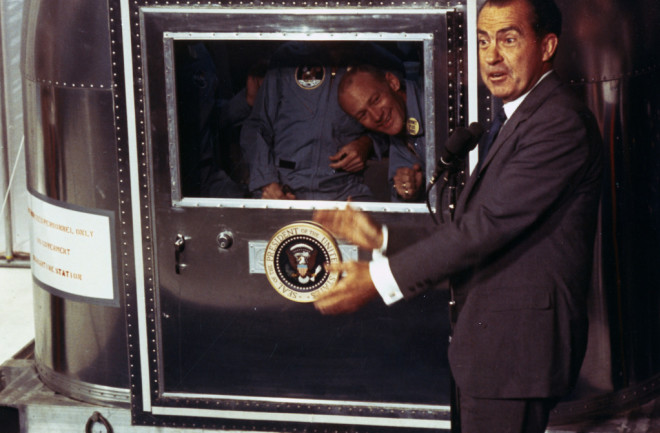 It’s easy, amid the celebrations of the 50th anniversary of the Apollo 11 moon landing, to see it as an inevitable success. NASA had been preparing for the task for years, ever since President John F. Kennedy made his famous speech at Rice University in 1962, declaring America would “go to the moon in this decade.” When Neil Armstrong and Buzz Aldrin touched down on the lunar surface on July 20, 1969, we met the challenge with time to spare. It was a moment of national pride, a historical triumph.

But, we should also remember, it could just as easily not have been. And, in the event of a fatal mishap, President Richard Nixon had his own speech about Apollo 11’s unhappy ending ready to go.

Traveling through space is inherently dangerous, and any number of problems could have doomed the mission, from the launch pad to the landing. But while NASA had sent astronauts right up to the moon, Apollo 11 would be the first time humans actually set foot on another world, and it would be the first time they tried to get off it. Should the lunar module experience any problems trying to leave the surface, that would be the end of Armstrong and Aldrin. No rescue would be coming.

It’s a grim thought, and a hard one to entertain today. Apparently, it was so even at the time. “Americans had become accustomed to happy endings on space flights, and so had I,” wrote Nixon speechwriter William Safire in his autobiography Before the Fall: An Inside View of the Pre-Watergate White House. Despite occasional failures — most notably the Apollo 1 fire that killed three astronauts — NASA’s efforts had been remarkably successful. It took a call from Apollo 8 astronaut Frank Borman to convince Safire of the mission’s real dangers. From his book:

“But on June 13, Frank Borman — an astronaut the President liked and whom NASA had assigned to be our liaison — called me to say, “You want to be thinking of some alternative posture for the President in the event of mishaps on Apollo XI.” When I didn’t react promptly, Borman moved off the formal language: “—like what to do for the widows.” The potential for tragedy was underscored by the nature of the failure that was most possible: inability to get the moon vehicle up off the moon. … Disaster would not come in the form of a sudden explosion — it would mean the men would be stranded on the moon.

As a result, Safire wrote a speech for Nixon to read “In Event of Moon Disaster,” as he titled the memo. He never officially submitted it, and when the mission proved victorious he quietly tucked it away into the record, as the National Archives puts it. But in 1999, 30 years after the landing, Safire discussed the almost speech on NBC’s Meet The Press, bringing it to the attention of many for the first time. (Tim Russert also took the opportunity to tweak Safire — a columnist at the New York Times who often wrote on language — for making a grammatical error on the plaque Apollo 11 left on the moon.)

Below is the full text of that speech, which sets the tone with the very first line. (The last line is likely a reference to Rupert Brooke’s poem The Soldier, also a tribute to the fallen.) Safire specified that the speech should only come after the astronauts’ widows were informed, and it would be followed by a clergyman “commending their souls,” as in a burial at sea.

IN EVENT OF MOON DISASTER:

Fate has ordained that the men who went to the moon to explore in peace will stay on the moon to rest in peace.

These two men are laying down their lives in mankind’s most noble goal: the search for truth and understanding.

In their exploration, they stirred the people of the world to feel as one; in their sacrifice, they bind more tightly the brotherhood of man.

In ancient days, men looked at stars and saw their heroes in the constellations. In modern times, we do much the same, but our heroes are epic men of flesh and blood.

Others will follow, and surely find their way home. Man’s search will not be denied. But these men were the first, and they will remain the foremost in our hearts.

For every human being who looks up at the moon in the nights to come will know that there is some corner of another world that is forever mankind.