If Planet Nine Is a Tiny Black Hole, This Is How to Find It

Our best bet could be to send a swarm of nanospacecraft — propelled from Earth by a powerful laser — to take a look. 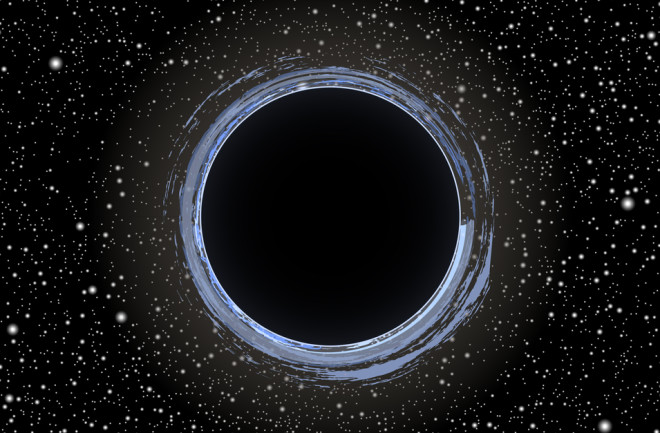 For centuries, astronomers have speculated that the solar system contains undiscovered planets that orbit in the distant, dark reaches of the sun’s realm. From time to time, they have spotted the gravitational effects of unknown bodies, forcing them to look for the culprit. Both Neptune and Pluto came to light in this way.

Now, astronomers have a similar puzzle on their hands. For some time, they have been gathering evidence that a massive planet must be orbiting the sun at a distance of around 500 astronomical units, or 70 billion kilometers.

The evidence comes from the orbits of icy bodies in the Kuiper Belt beyond Neptune. These objects seem to cluster together in ways that can only be explained if they were being “herded” by some massive object.

This object — Planet Nine, as it is dubbed — must be between five and 10 times the mass of Earth, but so far away that it is hard to see from Earth, despite numerous ongoing searches.

But there is another reason why Planet Nine might be hard to see: because it is not a planet at all. Instead, astronomers say one possibility is that it might be a primordial black hole, left over from the Big Bang but captured by the sun.

Although between five and 10 times more massive than Earth, this black hole would by tiny — about 5 centimeters across. Consequently, it is almost impossible to spot with a telescope. There is a small possibility that such a black hole might be observable through its interaction with dark matter, but that is by no means guaranteed. So astronomers are scratching their heads to come up with another way of finding it.

Today, they have an answer, thanks to the work of Ed Witten, a physicist at the Institute for Advanced Study in Princeton, New Jersey. Witten’s idea is to look for the gravitational forces this black hole must exert on anything that passes nearby. So he proposes sending a fleet of nanospacecraft in its direction and then looking for any unexpected deviations from the expected trajectory.

“If further study of the Kuiper Belt strengthens the case for existence of Planet Nine, but discovery via telescopic searches or a dark matter annihilation signal does not follow, then a direct search by a fleet of miniature spacecraft may become compelling,” he says.

Witten is not the first to imagine the potential of nanospacecraft. Various scientists and visionaries have studied the idea of using powerful ground-based laser beams to propel tiny chip-based spacecraft toward the stars.

The big advantage is that such spacecraft needn’t carry their own fuel, but would instead sit on the tip of laser beam generated on Earth. This laser beam could accelerate them continuously for long periods of time, allowing them to reach huge velocities of perhaps 1 or 2 percent the speed of light.

“To search for Planet Nine, one would like spacecraft velocities of (at least) hundreds of kilometers per second,” says Witten, adding that such speeds would allow a spacecraft to travel 500 AU on a 10-year timescale.

What’s more, it is possible to launch nanospacecraft by their hundreds, possibly thousands, toward Planet Nine. That’s important, because Witten estimates that such a spacecraft would need to come within a few dozen AU of a black hole for any changes in its trajectory to be observable. And because astronomers don’t yet know exactly where Planet Nine might be, the only option is this scattergun approach.

Such a mission would be a significant challenge. Witten points to previous and ongoing projects to develop and launch nanospacecraft. The best known is Breakthrough Starshot, a $100 million initiative to develop and test the technology capable of sending laser-propelled nanospacecraft to nearby star systems. The project’s goal is to “lay the foundations for a flyby mission to Alpha Centauri within a generation.”

A mission to the outer edges of the solar system might be a useful technology demonstrator. Calculations by the British rocket scientist Kevin Parkin suggest that the cost of such a mission would be of the same order as the $1 billion missions that NASA has undertaken many times.

Nevertheless, almost every part of such a mission would be a challenge, from the development of a laser capable of providing propulsion to the design of a chip capable of relaying position data back to Earth. That will require the spacecraft to carry a high-precision onboard clock within a payload measured in grams. “Sufficiently accurate timekeeping in a miniature spacecraft may be the biggest obstacle to this project,” says Witten.

But there is certainly motivation to try. The discovery of a black hole orbiting the sun would be quite a prize for whoever undertook such a task. Indeed, it may be the last chance to discover a significant new body orbiting our star.