If Europa Has Ice Plumes, Maybe They Work Like Earth’s Volcanoes 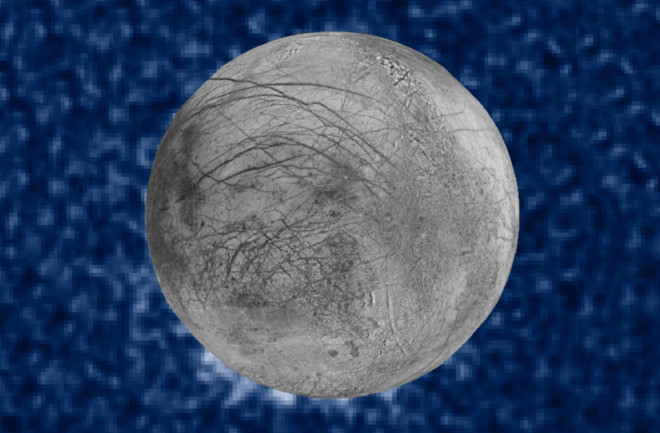 A composite image of Europa, showing potential ice plumes on the southern (bottom) limb of the moon. Taken by the Hubble Space Telescope.NASA NASA announced yesterday that the Hubble Space Telescope likely spied plumes of ice coming from the surface of Europa. This adds even more to the scientific allure of one of Jupiter's largest moons as more evidence that beneath the icy surface of Europa lies liquid water ... and with it, the possibility of life. Now, why am I talking about a distant moon in this space normally populated by Earthly volcanoes? That's because these plumes snapped by Hubble are as much a "volcanic" product as a big ash cloud is on Earth. On Europa, at least near the surface, the players are different---but it's likely that the processes that form these ice plumes are similar to silicate volcanoes on Earth. Features like geysers on our planet behave similarly, but with water heated to at or above boiling. On a planet/moon where ice and water play the role of rock and magma, it might be more proper to call these volcanic features. Europa isn't the first body in the solar system where ice volcanism has been potentially spotted. When Voyager 2 swung by Neptune, it spotted streaks from plumes of frozen water and methane on the surface of Triton. Cassini captured definitive evidence of ice jets from Enceladus and potential ice volcano craters were spotted on Titan, both moons roaming around Saturn. Even large asteroids like Ceres may have forms of icy volcanoes, albeit in more of a sluggish, more lava-like fashion. Even early data from New Horizons' visit to Pluto hints at icy flows that might be "volcanism." However, active ice volcanism (or cryovolcanism) hasn't been captured on Europa, although it seems a likely candidate for such exogeologic events. Images of the surface of Europa taken by the Voyager and Galileo missions show a surface that is surprisingly smooth, suggesting that its icy surface has been repaved after eons of impacts. It even has features that look a lot like terrestrial mid-ocean ridges and subduction, expect instead of lava erupting to create oceanic plates made of rock or rock plates sliding under one another, on Europa we might have plates of ice behaving like Earthly tectonic plates.

Ice plumes (left) and an enhanced image emphasizing fissure eruptions of ice (right) on Enceladus, taken by Cassini.NASA Cryovolcanism works much the same way as magma-driven volcanism on Earth (or, at least we think it does). Internal heat on moons with thick layers of ice get heated by tidal forces (or possibly deep magmatism?) and pockets (or oceans?) of water are created under the icy shell. Pressure likely builds in these pockets of liquid water and when a crack is opened, that liquid water "erupts" to the surface, creating a plume of ice that can reach hundreds of kilometers over the planet's surface thanks to the lack of much atmosphere and lower gravity. Maybe some water does leak out as sluggish "slush" flows to create "ice lava" flows or domes. This is all very speculative, because we've only been able to whiz by Europa or any of these icy moons and take passing glances at their surfaces. How much do they change from year to year? Can we identify areas that are "warmer" that could be places of active cryovolcanism? Does the presence of ice volcanism and (hopefully) liquid water mean that moons like Europa, Titan, Enceladus, and Triton are the real places we might find life in the solar system? That is why NASA and the ESA may undertake to Europa and further. Our definition of what is "volcanism" expands when we look at other planets, from these ice volcanoes to sulfur volcanism on Io to the rocky volcanism on Earth.