I'm an astronomer, not a geomorphologist. No, I didn't make that word up (though I thought I did before checking Wikipedia). A geomorphologist studies the structures of landforms and tries to figure out how they got that way. I guess I do that professionally for some objects (planetary nebula, supernova remnants, and esoteric stuff like that), but not for planets and moons. That's a confusing job, so I leave it to the other professionals. When I do it, it's speculation for my own amusement (or in this case, I hope, for yours too). And it's places like Hyperion, a moon of Saturn, where I know I've made the right choice. The Cassini probe took some close-up snapshots of the weirdo little iceball recently, and look what it saw:

What a mess! I have no desire to try to figure this one out. OK, that's a lie. I'd love to know what makes this look like a big old loofah sponge. There are two things that strike me about the image. Well, three, if you count the fact that Hyperion is completely freaking weird. The first is the enormous crater. It's really big, but is it shallow? It's hard to say what the depth is from just one picture, but it sure looks shallow. From the appearance of all the other craters, Hyperion looks very fragile to me, crumbly even (what material scientists call friable). An asteroid smacks into it, and the crater collapses back on itself. You get rims, and steep walls, but the crater fills in. If the impact that created that crater had been any bigger, I bet it would have shattered the moon, much like Saturn's moon Mimas and its scary big crater Herschel. * The second thing are all the little craters. It's covered with them! In some icy moons, the craters get covered over when the ice melts under a new impact, or some other event washes over the surface. Not Hyperion. Those craters look pretty fresh. Weirder even, when you look at closeups, the craters all have black stuff at the bottom. What's that? They aren't shadows; the angles are all wrong. It's actual black stuff. 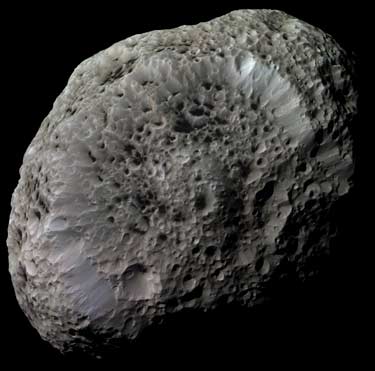 Click image for a bigger version, or here for a huge one, from The Planetary Society blog page. All images are courtesy of NASA/JPL/Space Science Institute, and CICLOPS. 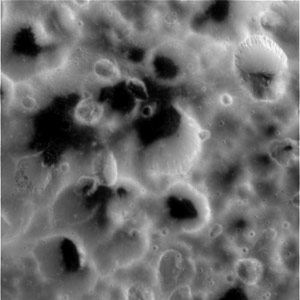 In that image, you can see it, and you can also see how the walls of the craters have slumped. I would expect the junk at the bottom to be made of the same material as the stuff in the walls, but I'm not so sure. Why is it black? I think (that is, I'm speculating), that the material turned black after the walls slumped. See the crater in the upper right of the closeup? The landslide from the slump appears to partially cover up the black stuff on the bottom, implying the black stuff turns black in a separate event. Maybe this crater had a second landslide, covering up the stuff that had turned black from the first landslide. Weird, weird, weird. Even for a moon of Saturn. I'll remind you again, I am not a geomorphologist. Anything I say here is speculation on my part. But I'll be keeping an eye out for word form the real scientists working on this. Hey! Come to think of it, I'll be meeting Cassini Imaging Team Leader Carolyn Porco at James Randi's The Amaz!ng Meeting 4 in January (in fact, I'm introducing her, gloat gloat). I'll ask her then. Until then, I'll have to settle for more speculation, while I peruse the raw Cassini images of Hyperion. You should too. Take a look at how odd, how mysterious, and how wonderful our solar system is, and think about how much more there is to see.

* Now, after writing this, I wonder... that crater is nearly the size of the moon. That strikes me as not possible. Some scientists are wondering how solid comets are; maybe they are more like rock piles held together by ice. It's not beyond my imagination that Hyperion (which is icy like a comet) could have had hollow pockets in it, maybe where there was frozen gas. I'm wondering now if it was a smaller event, and the impact heated the volatile gas, which escaped, causing a much larger slump than the impact itself could have caused. Think of driving a nail into a shaken soda can and you'll get the idea. Hmmm... speculation is fun, and it's free.