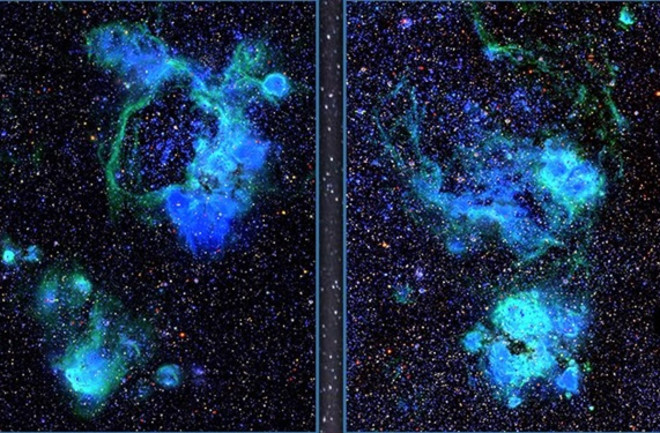 These star-forming regions found within the Large Magellanic Cloud are packed with young, massive stars, leading to strong emissions from surrounding clouds of hot gas. (Credit: SMASH survey) The Large Magellanic Cloud (LMC) and the Small Magellanic Cloud (SMC) are two of the most stunning naked-eye sights you can spot in the southern sky. Over the past few billion years, these two satellite galaxies of the Milky Way have been locked in a complex dance that has led to numerous interactions between them. And each time they get close, their gravitational forces disrupt the gas clouds within them, spawning the formation of thousands of new star clusters. Now, astronomers need your help to track down all these relatively faint clusters.

A star cluster is a group of hundreds to millions of stars that all form at basically the same time. And though the stars in a single cluster run the gamut when it comes to mass, they're all forged from the same material, meaning their compositions are nearly identical. This fixed variable of composition helps make star clusters incredibly useful to astronomers, as their ages can be dated with extreme precision. Once you know the ages of a bunch of star clusters that potentially formed during past interactions between the LMC and SMC, you can begin to disentangle the Magellanic Clouds' complicated interaction history. And that's exactly what astronomers hope to do, as it may help reveal clues about the Milky Way's own past. However, before astronomers can use the ages of star clusters to piece together our galactic neighborhood's complex past, they first need to actually discover the faint clusters. So, as part of the Local Group Cluster Search (an off-shoot of the larger Zooninverse citizen-scientist project), researchers are delegating this first step to anyone willing to pitch in.

The Large and Small Magellanic Clouds (upper left and center left, respectively) float majestically above the Blanco 4-m telescope at Cerro Tololo Inter-American Observatory in Chile. The telescope is home to the Dark Energy Camera (DECAm), which was used to capture images for the SMASH survey. The insets show three star-forming regions within the Large Magellanic Cloud. (Credit: Anja von der Linden/Stony Brook University; Inset: SMASH survey) The Local Group Cluster Search relies on images obtained by a new investigation called the Survey of the MAgellanic Stellar History (SMASH). The SMASH survey utilizes the 570-megapixel Dark Energy Camera (DECam) on the Blanco 4-m telescope at Cerro Tololo Inter-American Observatory in northern Chile to image the Magellanic Couds — which is no small feat. "The Large and Small Magellanic Clouds are huge on the sky, covering more than 100 square degrees — an area larger than 500 Full Moons!" said head of the SMASH survey David Nidever, an astronomer at Montana State University, in a press release from the National Optical Astronomy Observatory. Although the Hubble Space Telescope would need to take tens of thousands of images to capture the full area of the Magellanic Clouds, the release says, DECam is able to do so in fewer than 50 images, thanks to its enormous field of view.

his gallery shows 24 star clusters located within the Magellanic Clouds as imaged by the SMASH survey. Both the brightness and overall size of each cluster is influenced by both its age and mass. (Credit:L.C. Johnson/Northwestern University) But with such an advanced camera collecting the data, why do we need humans to sift through it? The answer is simple: Humans are just better at recognizing patterns than computers, especially when there's noise in the data. "While computer-based methods continue to improve, the varying background and appearance of star clusters in images of nearby galaxies make cluster identification difficult to automate," said Cliff Johnson of Northwestern University, who leads the citizen science project. "Algorithmic cluster searches have trouble eliminating false detections due to chance groupings of stars, while human-classified catalogs provide a reliable sample of clusters down to very faint brightness levels." Currently, according to the project's website, nearly 1,700 volunteers have carried out almost 9,000 classifications for the Magellanic Clouds. And there seems to be a strong uptick in the number of contributions over the past few days. So fire up your browser. Grab a cup of coffee. And go find some star clusters in the Magellanic Clouds while there's still time!