It’s not an April Fools’ gag. Scientists just tested and confirmed that urea, a main component of human pee, can be used as a valuable additive for 3D printing structures made from lunar soil. 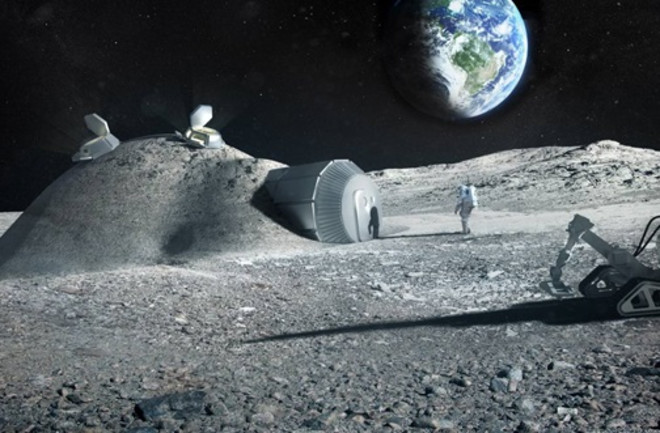 Moon Village, as seen in this artist's illustration, is a concept lunar outpost that would 3D-print protective shells around inflatable habitats using lunar soil. New research shows that urea, a compound found in urine, can function as a valuable additive to such 3D-printed structures. (Credit: ESA, Foster and Partners)

Shipping stuff to other worlds is expensive. We’re talking several thousand dollars per pound to get to the moon, at best. This is why long-term plans for establishing a presence on the lunar surface — including building moon bases — recognize that we’ll need to use any local material we can. And I mean anything. Even, apparently, urine.

European researchers have found that the second-most abundant component of urine — urea — can serve as an effective plasticizer that helps keep 3D-printed structures workable while still maintaining their strength and stability during hardening. Plasticizers are often used in geopolymers (think ceramics or simple concrete) because they make the initial mixture easier to shape while avoiding dilution with too much water, which would weaken the final product.

By combining simulated lunar soil with water and urea, the researchers made 3D-printed geopolymer cylinders that outperformed versions that didn’t include a plasticizer. The researchers also compared their urea-based samples to versions made with more common, polycarboxylate- and naphthalene-based plasticizers. The team found the urea versions could support heavy weights, largely maintain their shape, and withstand eight freeze-thaw cycles (like those lunar bases would experience) about as well as the versions made with the standard plasticizers.

"To make the geopolymer concrete that will be used on the moon, the idea is to use what is there: regolith (loose material from the moon's surface) and the water from the ice present in some areas," Ramón Pamies, an engineering professor at the Polytechnic University of Cartagena in Spain and co-author of the study, said in a press release. This geopolymer concrete would then be printed layer by layer to encase a crewed habitat, ideally providing protection from lunar hazards like temperature swings, harmful radiation, and micrometeorites.

“With this study, we have seen that a waste product, such as the urine of the personnel who occupy the moon bases, could also be used,” Pamies said. “The two main components of this body fluid are water and urea.”

In the new research, scientists 3D-printed geopolymer cylinders using a range of different formulas. They found that a geopolymer mix using 3 percent urea (left) — which is found in urine — as a plasticizer was comparable to other versions made with more common plasticizers like naphthalene (right). (Credit: Shima Pilehvar et al./Journal of Cleaner Production)

In other words, we could make geopolymers on the moon by harvesting water from the moon and bringing plasticizers from Earth. Or, as this research suggests, we might be able to get both the water and the plasticizer from astronaut pee. (Although, admittedly, this also would mean that astronaut urine doesn’t get recycled back into drinking water like it does on the International Space Station.)

It has been 50 years since humans first set foot on the moon as part of the Apollo program. But as stunning of a technological and scientific achievement as Apollo was, the current Artemis lunar exploration program is perhaps even more ambitious. Not only does NASA plan to return humans to the moon for the first time in a half century, the long-term goal of Artemis is to establish a crewed outpost on the lunar surface by the end of the decade.

Realistically, 3D-printed structures made out of lunar regolith likely won’t be feasible by the time NASA starts constructing its first lunar outpost. But over the coming decades, NASA, other space agencies like Russia's Roscosmos and the China National Space Administration, and international collaborations like Moon Village, will likely turn to using local resources for extraterrestrial construction whenever possible.

Perfecting this practice, known as In-Situ Resource Utilization (ISRU), is expected to play a vital role in the future human exploration of the moon, Mars, and beyond. And though the idea of using urine for construction might be unique, the idea of using lunar regolith is not. The Moon Village project, backed by the European Space Agency, wants to begin a crewed lunar base by first sending inflatable modules to the moon. However, these modules wouldn’t effectively shield humans from the lunar environment. To protect astronauts, the ESA and the Moon Village Association are working with private companies to develop a technique for 3D-printing protective shells around the modules using readily available lunar regolith. And based on this new research, once humans arrive, additional protective shells could utilize even more local resources — namely, the water and urea in astronaut urine.

But we only know that urea can be used as a plasticizer. We don’t know if urine — in its raw form — could be used to make regolith-based structures.

“We have not yet investigated how the urea would be extracted from the urine, as we are assessing whether this would really be necessary, because perhaps its other components could also be used to form the geopolymer concrete," Anna-Lena Kjøniksen, an engineering professor at Østfold University College in Norway and co-author of the study, said in a press release. "The actual water in the urine could be used for the mixture, together with that which can be obtained on the moon, or a combination of both."

Moving forward, the researchers say they still have a lot of work to do to determine the best mix of materials for building locally sourced moon bases. But for now, it sure is a relief to know astronaut urine might not go to waste.

The new research was published February 20 in the Journal of Cleaner Production.