NASA launched the Hubble Space Telescope 25 years ago this month, and it has done nothing short of rewrite how we see the universe. 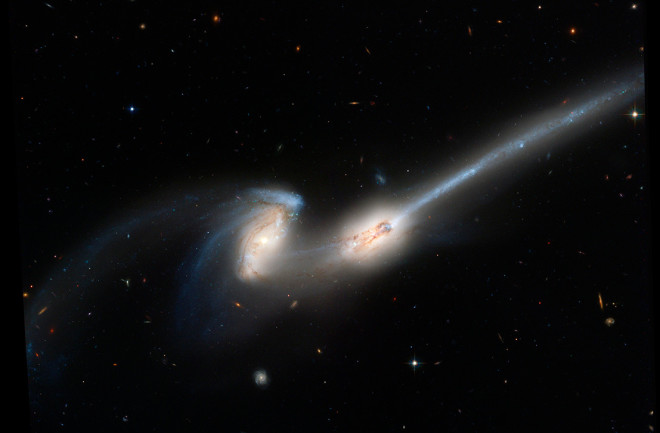 1990: Supermassive Black Holes Hubble images revealed that most galaxies contain supermassive black holes millions of times heavier than the sun. Astronomers are still trying to work out the full relationship between a galaxy’s evolution and its black hole.

1991: Nascent Solar Systems Data showing pancake-shaped objects within a distant cloud of gas and dust provided the first views of protoplanetary disks — the birthplace of stars and orbiting planets, including our solar system.

1992: Dark Matter Einstein predicted that the gravity of massive bodies could alter the path of light. When Hubble observations showed this also occurring around galaxies too puny to warp light by themselves, astronomers realized that the galaxies must be suffused with an unseen kind of material — dark matter — that invisibly adds mass to the universe.

1993: Colliding Galaxies Hubble has captured images of galaxies in midcollision, with their spectacular streams of stars, gas and dust. These crashes can trigger the birth of new stars, which may go on to form their own solar systems.

1995: The Hubble Deep Field After pointing Hubble at a supposedly blank section of sky for more than 100 hours, astronomers discovered thousands of tiny, distant galaxies. Not only does it hint at the universe’s unexpected richness, but that abundance suggests that small, irregular galaxies merge to form the larger ones more familiar in our cosmic neighborhood.

2001: Dark Energy Hubble data on stellar explosions in distant galaxies gave astronomers their best measurement of how fast the universe is expanding. To their surprise, they learned the expansion rate is actually speeding up — some still-mysterious repulsive force, dubbed dark energy, is actively pushing the universe apart.