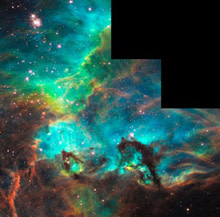 You may remember where you were when your car's odometer rolled over 100,000 miles. NASA scientists are swelling with the same kind of pride over the Hubble Space Telescope, which has completed its 100,000th orbit of the Earth. NASA celebrated the milestone by taking new pictures of a nearby star nursery, close to the Tarantula Nebula 170,000 light-years away. Ultraviolet radiation blazing from hot, young stars in the cluster has created dramatic ridges and valleys of dust. The intense radiation has also set aglow gaseous filaments and eroded away the dusty cocoons where newborn stars are being born, unveiling the hatchlings at the tops of serpent-shaped pillars [Science News]. The gas cloud, or nebula, itself is cold and dark – the perfect environment for creating new stars. But intense radiation from young stars nearby is eroding the cloud and causing its 'walls' to glow [New Scientist]. The colors in the picture above represent emissions from different kinds of atoms—red is sulfur, green is hydrogen, and blue is oxygen. While taking images like this since its 1990 launch, Hubble has logged 2.72 billion miles, orbiting the planet once every hour and a half. But it probably won't be sending dramatic pictures back to Earth for too much longer. The observatory is set to have its fifth, and final, face-lift in October, when the space shuttle Atlantis visits the orbiting scope...The tune-up should extend Hubble's life until at least 2013. By that time, NASA's shuttle fleet will likely be retired and the telescope could face destruction by burning up in the atmosphere during a controlled dive down to Earth [SPACE.com]. A photo feature in the September 2008 issue of DISCOVER, hitting newsstands this week, profiles the crew and the equipment that will soon go up. Image: NASA/ESA/Hubble Heritage Team/STScI/AURA