Galaxies with central black holes can take various forms depending on the angle at which astronomers see them. 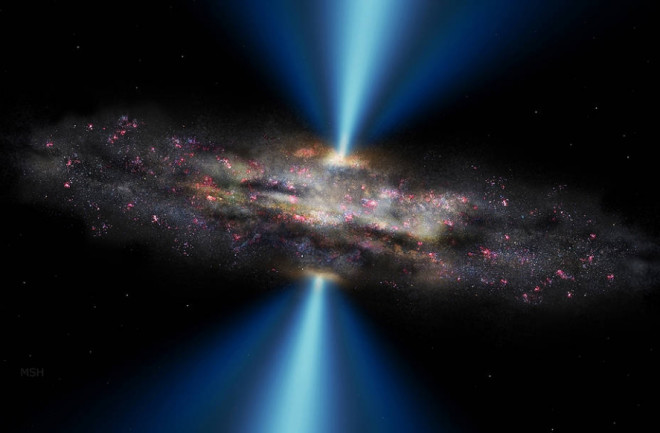 Every large galaxy has a supermassive black hole at its center. And some of those black holes are actively ejecting huge amounts of high-energy light out into the cosmos.

Astronomers divide some of these active galaxies, which otherwise look like normal spirals, into two types, so-called Seyfert 1 and Seyfert 2 galaxies. Seyfert 1 galaxies have distinctive light signatures that emerge from the fast-moving material just outside the black hole. Seyfert 2s lack these signals.

But for three decades now, astronomers have suspected that these two types of galaxies might in fact be the same, we’re just seeing them from different angles. The thought was that a dusty ring around the black hole could hide certain features, making a Seyfert 1 appear like a Seyfert 2.

However, a few stubborn galaxies persisted in hiding those features apparently without any dust ring. That made some astronomers think there might really be a class of “true Seyfert 2 galaxies,” whose features weren’t hidden but genuinely lacking.

Now, astronomers have ruled out one of the last remaining “true Seyfert 2” stragglers, proving it was a Seyfert 1 after all. This means there’s no such thing as a Seyfert 2, just Seyfert 1 galaxies viewed from different angles. Astronomers led by Stefano Bianchi, from the Università degli Studi Roma Tre in Italy, published their results in Monthly Notices of the Royal Astronomical Society July 11.

Seyfert galaxies look like normal spiral galaxies when viewed in visible light. But when astronomers observe them at high-energy wavelengths like X-rays and ultraviolet light, their cores light up as hotbeds of activity, revealing the energetic black holes powering their centers. And when astronomers peer at the galaxies’ chemical fingerprints in detail, they notice two sub-groups, Seyfert 1 and 2 galaxies.

The idea is that Seyfert 2 galaxies are really Seyfert 1 galaxies, with their cores hidden behind an obscuring wall of dust. This dust only gets in the way from certain angles, since it sits in the plane of the galaxy like a doughnut, with the black hole at center.

But a few galaxies, especially one called NGC 3147 appeared to be missing the signals from the fast-moving material just outside the black hole, while also showing no sign of a dusty doughnut to hide them. That left NGC 3147 as a shining example of a “true” Seyfert type 2 galaxy. And so, the debate has lingered.

But now, using just one hour of time on NASA’s Hubble Space Telescope, astronomers have finally observed the missing signals from NGC 3147. Because it was so dim, the signals coming from that fast-moving material just outside the black hole were masked by brighter starlight nearby. But Hubble’s keen vision spotted them anyway.

The authors point out that since NGC 3147 was the best known example of a true Seyfert 2, this new result quite likely rules out their existence entirely. “What’s most important to astronomers is pruning this dead branch,” study co-author Robert Antonucci in a press release.

The astronomers have been awarded six more hours of time using Hubble to study NGC 3147 in even greater detail, and perhaps unlock any remaining secrets about its central black hole.