When Galileo first turned his telescope to the sky, almost exactly 400 years ago, he could not possibly have known what he was starting. Today, four centuries later, we've come a long, long way. To celebrate the anniversary of Galileo's telescopic revolution, NASA's Great Observatories -- Hubble, Spitzer, and Chandra -- have released a jaw-dropping mosaic of the very heart of the Milky Way galaxy. Behold! 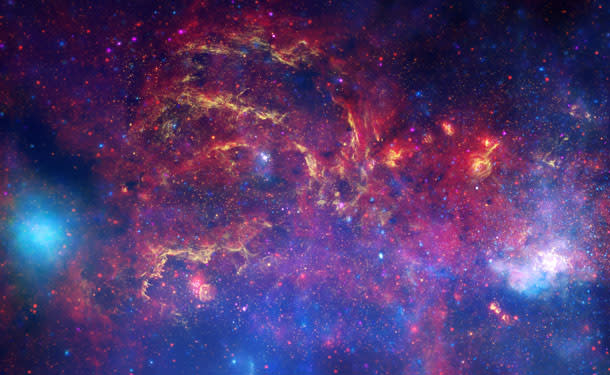 [Oh yes, you want to click to embiggen that-- what I show here is a very compressed version. Or you can go here for a massive copy. You can also get wallpaper versions here.] This image is nothing less than a heroic effort of astronomical artistry. It's a chunk of the sky 38 x 14 arcminutes across, or about half the size of the full Moon, and it's aimed right into the core of our galaxy. See the bright spot just to the right of the center? Buried in there behind light years of dust and gas is the monster of the Milky Way, a black hole with four million times the mass of the Sun. But even that is dwarfed by the 400 billion solar mass heft of the entire galaxy. 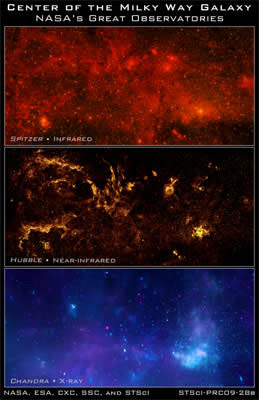 There is so much going on in this image it's hard to know where to start. But first... the Hubble images are in the near-infrared, with a wavelength a little more than twice what the eye can see (1.87 microns for those playing at home). That's represented in the image as yellow. Spitzer contributed observations in four infrared wavelengths (3.6, 4.5, 5.8, and 8.0 microns), and those are depicted in red. Chandra sees X-rays which are normally written as units of energy, but to remain consistent with the other two images, they were at wavelengths of 0.0005, 0.00025, and 0.00016 microns, and are shown in blue. What does all this mean? Different objects emit light at different characteristic wavelengths. Warm dust, for example, emits strongly in the infrared. Stars and warm gas emit visible and near-infrared light. Violently heated gas, affected by huge magnetic fields or shocked by colossal collisions glows in X-rays. So this image is a polychromatic view of the crowded downtown region of a bustling city: our galaxy. You might want to look at an annotated version of this image so you can get your bearings. It's worth it! The huge arches of gas on the left are actually the edges of gigantic molecular clouds (dense nebulae where stars are born), lit up by the torrential blast of light from a clutch of massive stars nearby. This clot of stars, called the Arches Cluster due to the arcs it excites, can be seen as a small spot glowing blue just to the left of center in the picture. Don't be deceived by its diminutive appearance: the Arches cluster has thousands of superstars in it, each dwarfing our Sun, and each capable of sleeting out vast amounts of radiation that lights up the gas surrounding it. Were this cluster much closer than its 25,000+ light year distance, it would blaze in our sky like a beacon. Replace the Sun in our solar system with just one of those stars, and the Earth would be fried beyond the capability of any life to survive. You might as well try living in the flame of an arc-welder. 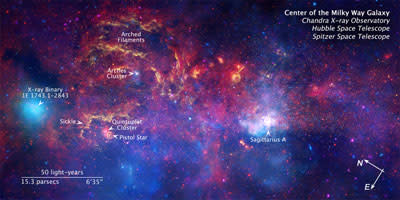 Below and just to the left of the Arches is a clumpier, more twisted arc of gas called the Sickle. That's a giant cavity being carved out of dense gas by the Quintuplet cluster, the pinkish glow in its center. It's another nursery of stars like the Arches cluster, which is also blasting out light and stellar winds which eat away at the gas enveloping it. The Pistol Star resides there, perhaps one of the most massive stars in the Milky Way. And there's more! The blue glow on the left is from an X-ray binary called 1E1743.1-2834, what is probably a massive star being orbited by either a neutron star or a black hole. Matter is being stripped from the star and piling up outside the collapsed companion, where it gets heated up to millions of degrees and emits X-rays. Supernovae remnants dot the image, as do stars, filaments of gas, clouds of dust, and more. This picture is an astronomer's dream, a map of everything someone might want to visit with a starship -- as long as the shields are at full strength. This image is also a map of violence, turbulence, and unrest... a typical scene, so we think, of any normal spiral galaxy like ours. And our Galaxy's center is considered quiet by astronomers! Some are far worse. But this is home for us. It's a place of unimaginable fury but also astonishing beauty... and we see it now as we do because we have dared to examine the world around us, to use tools we invent to peer closer, to magnify the tiny, to extend our eyes into realms we once didn't even know existed. And every time we do -- every single time -- we find more questions, more puzzles, more things to examine. And we find art. Galileo wasn't the first to turn his telescope to the sky, nor was he the first to record what he saw. But he was the one who made everyone see what he did, and for that, all these years later, he is owed a debt of gratitude.

The SciencesHow Big Is the Milky Way?
Recommendations From Our Store