How Will The Universe End?

Researchers theorize on whether the cosmos will end in fire, ice or something else. 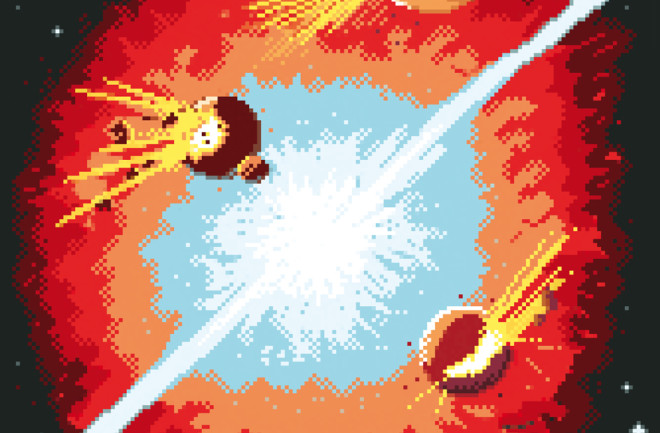 Cosmology deals with the big questions of the universe, often the same questions that keep philosophers up at night. When did the universe begin? How did it start? Has the universe always been expanding? (For the record, the answers are: about 13.8 billion years ago, in a high-density state that rapidly expanded called the Big Bang and yes, but not always at the same speed.) But here’s a question they haven’t figured out yet: How’s it all going to end?

It’s a big question all right, but we’ve made surprising headway toward an answer. In the last years of the 20th century, the astrophysical community was stunned to learn that the universe was driving itself apart. For decades, scientists had known that distant galaxies all move away from us, with the farther ones moving the fastest. The only way this makes sense is if the universe itself is expanding. Given all the matter in the cosmos, the force of gravity should be slowing down that expansion. But when cosmologists calculated just how much it’s slowed down, they got a negative result — the expansion of the universe is speeding up!

Nobody knows what’s driving the acceleration, so cosmologists have dubbed that mystery dark energy. It is so dominant (about 69 percent the total content of the entire cosmos) that dark energy quickly became a part of any discussions about the final end of the universe. And while there are no definite answers yet, those discussions have come up with a few interesting possibilities.

No one knows what dark energy is, so we can’t be sure how it will behave in the future. In 2003, Robert Caldwell of Dartmouth College proposed a new theory of the expansion of the universe where the rate of acceleration keeps increasing over time.

Imagine a driver who keeps a foot on the gas pedal of a car with no top acceleration. As the car goes faster and faster — the speed of the velocity change itself increasing over time — the car would eventually fly apart in pieces as friction took its toll.

A similar thing happens to a universe with relentless acceleration: Galaxies would be destroyed, the solar system would unbind and eventually all the planets would burst asunder as the rapid expansion of space rips apart its very atoms. Finally, our universe would end in an explosion, a singularity of literally infinite energy.

Current theories predict that if this so-called Big Rip is in our future, it will take another 22 billion years to arrive. But there are still many details to fill in, and scientists like Vanderbilt University mathematician Marcelo Disconzi will provide those details. His work originally focused on bulk viscosity — the measurement of a fluid’s resistance to expansion or contraction — and how moving fluids behave when approaching the speed of light. (That can happen in extreme astronomical situations, such as an exploding star.) No one had successfully modeled how a viscous fluid would act at relativistic speeds, but working with colleagues in the Vanderbilt physics department, Disconzi successfully did it.

The results are interesting, but Disconzi acknowledges that Big Rip theories still require a bit of work to make sense, particularly the part about infinite energy being released.

“In physics, finding an infinity is likely an indication that we are missing part of the puzzle,” he says.

An improved theory might show that the universe’s expansion rate doesn’t really go all the way to infinity, no matter how large the Big Rip becomes. For now, as with many cosmological theories, we’ll have to wait and see.

“That’s it” might not sound like much, but it’s a bleak way to go. As the cosmological constant continues to drive the acceleration of the universe, all the galaxies outside our immediate neighborhood will be too far away to be visible in a few trillion years — their light will simply never reach us. Entropy would continue to increase as well: Star formation itself will end in 100 trillion years as all the matter to fuel them is exhausted. Black holes will evaporate, matter itself will eventually decay into radiation and the universe will be a cold, lightless, lifeless place for the rest of eternity. This dark future is known as the Big Freeze.

Dark energy is so baffling that it has taken the better part of two decades to understand the theory enough to even design experiments to study it, let alone figure out if the Big Freeze lies in our future. (Not that we could do anything about it if it did, of course.) Trodden is a theorist for one such planned experiment at the Large Synoptic Survey Telescope, currently under construction, that will image the entire sky every few nights at unprecedented detail. When it “switches on” in 2022, the telescope will study billions of galaxies every night, giving astrophysicists an unparalleled ability to test galactic behavior.

By analyzing how gravity affects galaxies’ light, and analyzing their three-dimensional positions and movements in space, the scientists should have enough information to finally unlock some of dark energy’s secrets. Does it arise from quantum fluctuations in the vacuum of space? Is it just a part of gravity we’ll have to add to the laws of physics? Understanding such details is crucial if we want to figure out whether we’re heading for the Big Freeze — or something else.

Of course, there’s always the chance that dark energy won’t actually matter. The other scenarios we’ve considered assume that our universe is all there is. But what if there’s more out there, and our universe is but a small part of a multiverse? Could these other universes affect the ultimate fate of our own?

The short answer is yes. “Imagine you go to a very, very large scale — much larger than our current observable universe,” explains Jonathan Braden, a cosmologist at University College London. While our own universe is homogenous and roughly the same everywhere, taking such a large view might reveal that it’s just a tiny pocket with its own physical parameters and laws, different from the larger multiverse.

If so, our universe would exist in a state known as a false vacuum, where we wrongly suppose that we exist in the most stable state, but it’s still possible to drop to another one suddenly. Braden explains this would result in a phase transition, a change similar to how water changes from liquid to gas at its boiling point — only for the entire universe. Basically, our cosmos might be like one of the bubbles boiling in a pot of water, he says, just one of many with their own sets of laws and constants. “Eventually these bubbles can run into each other, and from our viewpoint it would be like our universe … collided with another universe.”

That would be as bad as it sounds. Such a collision would spell an immediate end to our universe as everything changes to a new state. It could result in a combination of the two universes, or it could create something new entirely. There would be no warning, and nothing we could do about it.

What scientists can do, however, is see whether a false vacuum ever existed in our own universe in the very distant past, which could help tell us whether such a collision is likely to happen again. Such a prehistoric false vacuum would necessarily be much smaller than the scale of our universe (just a bubble within our bubble), but it might still leave behind a hint that something curious happened long ago.

Braden is part of a research team trying to predict what such a signature would look like. Their prime target is the cosmic microwave background (CMB), the oldest light scientists can see, which dates back to when the universe was just 380,000 years old. The team hopes that perhaps a little blip on the otherwise uniform CMB would betray the existence of such a false vacuum in the distant past, as well as provide the first concrete evidence for a multiverse.

If we can’t ward off the end of our universe, the least we can do is try to understand it.

These Are Not the End

Ask a theoretical cosmologist how the universe will end, and one of the first things you’ll hear is how many options are still on the table. “It’s very difficult to tell how the universe will end just from local measurements,” explains the University of Pennsylvania’s Mark Trodden. There’s little we know for sure; in a universe of infinite possibilities, anything can happen. But with the emergence of dark energy, a few of the previous contenders for our ultimate fate are now much less likely.

The Big Crunch: The Big Crunch is a classic scenario for how the universe could end. The driving idea: What if the expansion of the universe does not last forever? At some point, the universe might stop growing because of the gravitational pull of all the matter inside of it, and then it would start to collapse back into itself.

The final result would be a universe that reaches a tiny singularity, a dark reflection of the Big Bang. There was even some speculation that a “Big Crunch” could produce a Big Bounce right afterward, Big Banging a new universe into creation. Perhaps our universe was merely one iteration of an infinite string of Big Bangs, Crunches and Bounces.

The Dyson Scenario: One important question concerning the ultimate fate of the universe concerns its inhabitants: Can intelligence and consciousness overcome entropy, the eventual wearing down of our universe?

In the 1970s, Freeman Dyson was one of the first physicists to contemplate the end of the universe using modern cosmology. He proposed that in the distant future, intelligent beings might figure out a way to “cheat” a Big Freeze-like scenario. First, as the end times approach, the beings would need to store a finite amount of energy in the universe; they would then use half this energy to power their thoughts (the only remains of their super-advanced lives).

Once this was used up, the beings would enter a state of non-energy consumption; they’d be in stasis, while the energy remained. The universe would continue to cool, running down, but after a certain point another half of the remaining energy reserves would be released, thanks to an as-yet-unknown technology created by the beings, allowing them to think once again.

They’d effectively come back to life, never aware of the break in their thoughts. Eventually, they’d use up their available energy and return to stasis, with more energy in reserve. They could keep this cycle going infinitely and, from their perspective, never face the end of the universe. The beings’ thinking sessions would slow over time, but there could be an infinite number of them through this energy rationing. Who would mind slow thought processes if time stretches on forever?

Dyson’s concept on eternal intelligence was a good attempt at tackling how the universe’s end might not be civilization’s, but like the Big Crunch, it can’t overcome dark energy’s implications. An accelerating universe means that eventually parts currently in contact will be isolated from each other, and energy stored in these areas would be inaccessible. As such, while some theorists have speculated our future descendants could transfer information to new “baby” universes via wormholes or black hole formation, it appears inevitable that after some point, intelligence in our own universe will simply be impossible.

This article originally appeared in print as "Game Over."