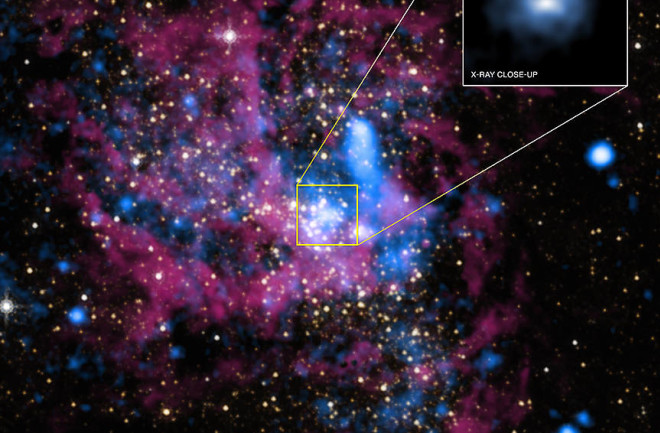 An image of the area surrounding Sagittarius A*, the supermassive black hole at the center of the Milky Way galaxy, in X-ray and infrared light. (Credit: X-ray: NASA/UMass/D.Wang et al., IR: NASA/STScI)

The discovery of Sgr A* is credited to two astronomers, Bruce Balick and Robert L. Brown, who published a paper in 1974 describing a bright radio source in a small region at the very center of the Milky Way.

Astronomers had known for a while that there were a lot of radio waves coming from near the Milky Way’s center. Karl G. Jansky, a physicist working for Bell Telephone Laboratories, was trying to identify sources of static the telephone company might have to deal with when he stumbled upon the discovery in the early 1930s. Jansky wanted to investigate further to find out why radio waves were coming from interstellar space, but Bell Labs was not interested, and no one else followed up on the discovery for several years.

Even though the radio source was discovered in 1974, the name Sgr A* didn’t come around until 1982. Astronomers had proposed a couple other names, like GCCRS (for Galactic Center Compact Radio Source), but they didn’t catch on. Brown proposed the name Sagittarius A* because the source was inside a larger radio-emitting structure called Sagittarius A. The asterisk notation was used in atomic physics for atoms that are in a high-energy state, and Brown thought this would be a good analogy for the compact radio source giving energy to its surroundings.

It was observations in the early 2000s of the closest stars orbiting Sgr A*, like the gravitationally redshifted star S2, that gave astronomers really convincing evidence that Sgr A* contains a supermassive black hole. Based on the stars’ orbits, astronomers calculated that roughly 4 million times the mass of the sun had to be contained within a region much smaller than the size of our solar system. They realized that whatever was at the heart of Sgr A* was too dense to be anything but a black hole.

Improving telescope technology will let astronomers make out finer details in areas of space surrounding supermassive black holes. The Event Horizon Telescope, a collaboration of telescopes across the globe working together, has recently observed the immediate neighborhood of Sgr A*. The Event Horizon Telescope team is expected to reveal the results of these observations soon. Stay tuned!