How to Trigger a Volcanic Eruption on Purpose 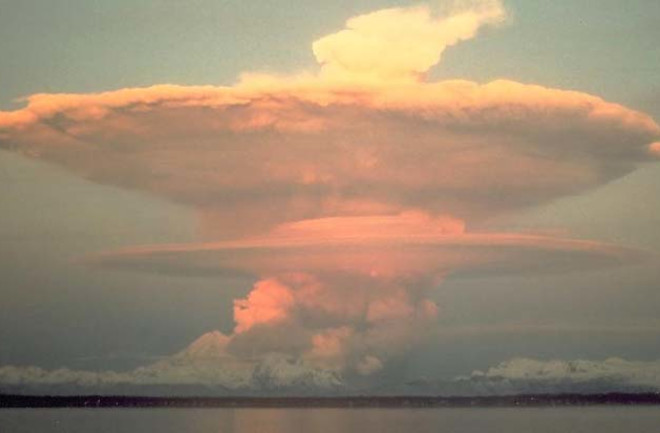 Over the last few weeks, a number of disparate items converged in my mind. First, in my Petrology and Volcanology class here at Denison, we spent a week talking about what geologists know about triggers for volcanic eruptions. Secondly, I was asked some questions about Richard Branson's April Fools' joke regarding the supposed Virgin Volcanic that would send a manned submersible into a volcano. Put these two ideas together, and you get to wondering about that age-old question: Could we trigger a volcano to erupt on purpose? This has been the realm of science fiction and conspiracy theorists for decades (centuries?), the idea that humans could figure out a way to get a volcano that isn't erupting to start erupting. Mostly, this is in the hands of evil scientists/lunatics who are bent on world domination (paging Dr. Horrible) or some last ditch effort to save the planet (as in Crack in the World).

How do people suggest we could get a volcano to erupt? The vast majority of fictional attempts to get a large explosive device into a volcano -- something like a nuclear bomb -- and the explosion from the bomb will cause the volcano to erupt. In most cases, the bomb needs to be delivered deep into the volcano (usually schematically shown as the "big vat of magma" that doesn't exist) to get the plan to work. The idea is the explosion in the magma will cause it to continue to erupt. No one has ever tried this in reality (although we have bombed lava flows to no effect). I've also heard people say that merely drilling into a volcano could case an eruption by releasing the pressure building in the volcano, however, this sort of thing happens a lot without dire consequences (unless you own the drill rig). Interestingly, both of these ideas are also suggested when discussing how to stop a volcano from erupting -- again, mostly by lowering the pressure in the volcano or blocking the magma from reaching the surface. Why do volcanoes erupt in the first place?

The name of the game when it comes to starting an explosive volcanic eruption is pressure -- or, more specifically, a drop in pressure. A simplified way to think of a volcano is like a champagne bottle with a cork. Keep that cork on and the bubbles in the champagne stay in solution. However, you remove that cork and all the dissolved carbon dioxide comes out of solution and bubbles form. Release that pressure fast enough and the bubbles form so quickly that you get that "pop" from the bottle. Build the pressure up in the bottle by shaking it and release the pressure and all that $500 bottle of champagne comes gushing out the top. That is, in a basic sense, what happens for an explosive eruption of a volcano -- volcanic gases come out of solution as the pressure is released, forming bubbles that fragment the magma into ash and tephra. That pressure being released is what we call "lithostatic pressure," that is the pressure caused by all the rocks above the magma. Lithostatic pressure goes up quite rapidly in the Earth -- it takes 10 km of the Earth's atmosphere to produce 1 "atmosphere" of pressure (what we feel at sea level). It only takes 4.4 meters of rock above you to exert the same force. Release enough of that lithostatic pressure and you release the cork. The ash plume is the "foom!" of champagne coming out of the bottle. The other way you can get a magma to erupt, usually explosively, is the addition of outside water. Think about the 2010 eruption of Eyjafjallajökull -- that eruption was made much more explosive by all the melted snow/ice on the volcano that mixed with the magma (however, it was likely triggered by an injection of new, hot magma). If the right ratio of water-to-magma exists, then the explosive mixing of magma and water can be self-sustaining, meaning that the explosive eruption will continue propagating until the supply of water or magma runs out. However, too little water means that you likely don't sustain the explosive mixing, too much water and you quench (solidify) too much of the magma. What could trigger an eruption? There are many theories of what can trigger a volcano to erupt. Some are as simple as the buoyancy of magma -- it is less dense than the surrounding rock, so it rises until it intersects the surface. Likely, this is only the dominant process as volcanoes that produce lava flows like Kilauea. If you want an explosive volcanic eruption, you want to produce bubbles (and lots of them) by (1) decompressing the magma, causing gases to come out of solution; (2) crystallizing minerals to concentrate water/volatiles in the remaining magma or (3) heating the magma with a new intrusion. A release in pressure can be accomplished a number of ways, including the failure of the roof above the magma body (a volcanic landslide is a great way), the buoyant rise of the magma or through some less common factors like melting of a glacier (likely too slow a process to trigger a specific eruption), excessive precipitation to erode the volcano, changes in atmospheric pressure or maybe even Earth tides caused by the pull of the Sun and Moon (rare, mostly in already active volcanoes). Once you've produced bubbles, you need to concentrate them towards the top of the magma body, maybe through a earthquake -- think about shaking an open bottle of soda with bubbles on the side: They all float to the top. However, in all these cases, you likely need a volcano that is "primed" to erupt -- that is, one that has eruptible magma that just needs to be "tipped" into erupting. What you'd need to potentially make it work -- and why that likely wouldn't work either. Armed with this information, if you want to try to get a volcano to erupt, you'll need to do a few things:

The fictional methods to get a volcano to erupt really don't help in any of the scenarios. Typically you see the evil genius picking a volcano that isn't showing signs of activity, so he/she is already showing up to the gunfight without bullets. The "bomb into the volcano" doesn't really address the pressure issue as the explosions don't remove enough of the overlying rocks to release that lithostatic pressure. Drilling into a volcano is like trying to bleed to death with a needle prick -- not enough pressure release to really make a difference. Sadly, the problem here is that mad scientists need to "think big." How I'd try to do it.

Okay, so, how would I do it? First, I need to find a volcano ready to erupt that doesn't erupt frequently (so that pressure is already building). Thinking of volcanoes globally that are showing signs of unrest today and likely a decent volume of eruptible magma, my pick might be Santorini in the Aegean Sea. The bonus there is that I have ready access to water. If there is magma rising under the volcano, then what I want to do is catastrophically release the overlying burden of rocks to produce bubbles in the magma, I want those bubbles to form a layer at top of the magma body to concentrate the pressure and I want to get water into that magma chamber to help aid explosivity. However, this is all easier said that done. One strategy would be to do something like mountain-top removal mining to remove a portion of the land surface above the magma body -- however, this takes time. What evil genius holds the world ransom while they slowly remove truckloads/boatloads of material ("Sorry, hold on, only 10,000 more loads to go!"). No, to do it quickly you'd many want high explosive charges just below the surface to blast away the land surface. You'd need a lot of them placed as a grid across the volcano, but the goal is to remove material quickly. Now, those explosives should do double-duty, where the shaking caused by the explosions might shake bubbles free in the magma (as more bubbles are produced from the release of the pressure). If the pressure gets high enough, the weakened roof (from the explosives) above the magma body might give away, allowing for a rapid decompression. If you wanted to add to the fun, the cracks you'd developed should allow for percolation of seawater into the magma to help the explosion along (much like may have happened at Krakatau in 1883). And now, the real problem Now, you might be thinking "he's got this whole thing figured out." Thanks, I try. However, I don't have it all figured out because there is one more problem I haven't mentioned. That problem is time. Sure, I could do all these things but one thing that volcanologists don't have a good grasp on is the timing -- how long between the triggers of an eruption and the actual eruption. In some cases, it looks like seconds, like the earthquake and landslide at Mount St. Helens that triggered the 1980 eruption. In some cases, the trigger could take months or even a year as seems to be suggested by some volcanoes in Chile after large earthquakes. So, you might go through all the trouble only to have really no control on when the volcano will erupt -- again, not the best plan if you're planning to shock the world with evil genius. Heck, there is a pretty good chance that the volcano might not even erupt -- so many variables go into this that even picking an ideal volcano that is ready to blow might not do it -- and all your activity might impede an eruption rather than cause it. This all just shows how little we know about the exact mechanisms that can cause a specific volcano to erupt. So, as you draft your plans for world conquest, cross "hold the world hostage as I cause a volcano to erupt" from the list. You have a better chance at steering an asteroid into the planet than getting Yellowstone to explode at your whim.