How to Create a Black Hole on a Lab Bench 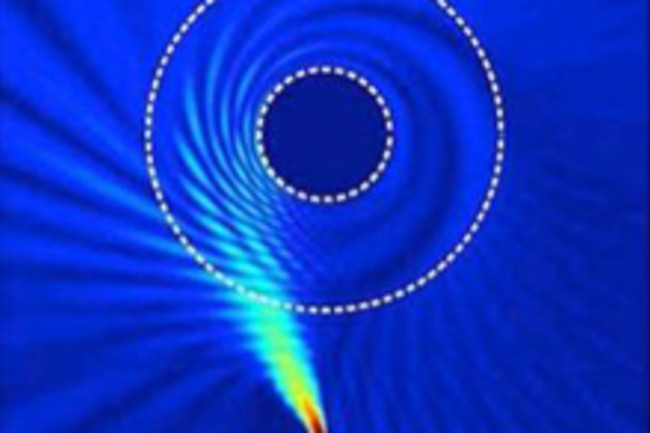 In a lab in Nanjing, China, two researchers are mucking about with what could be called the world's first artificial black hole--but there's no reason for alarm. The researchers, Qiang Cheng and Tie Jun Cui, haven't created a doomsday device, but rather a nifty experiment that harnesses the strange properties of metamaterials. Physicists have already learned how to

steer light around an object within a metamaterial to create an invisibility cloak.... Now Qiang and Tie have created a metamaterial that distorts space so severely that light entering it (in this case microwaves) cannot escape [Technology Review].

The lab experiment simulates a cosmological black hole, where the intense gravity curves space-time, sucking in any matter or radiation that gets too close. Not even light can escape a black hole (hence the name). The researchers couldn't duplicate the intense gravity, but they could build a metamaterial with a physical structure that would make light curve into its central core, never to return. The device they built works only with microwaves so far, but the researchers say a visible light black hole is the next step.

The device consists of 60 layers of circuit board arranged in concentric rings. The layers are coated in copper and etched with intricate patterns that interact with light waves at microwave frequency.

The research paper, which has been posted on the preprint server arXiv but hasn't yet been published, notes that the scientists measured microwaves going in, and found none coming out. Making a similar device that captures visible light will be quite a challenge, as

visible light has a wavelength orders of magnitude smaller than that of microwave radiation. This will require the etched structures to be correspondingly smaller. Cui is confident that they can do it. "I expect that our demonstration of the optical black hole will be available by the end of 2009," he says [New Scientist].