How These Glowing Blue Thrusters Will Get BepiColombo to Mercury 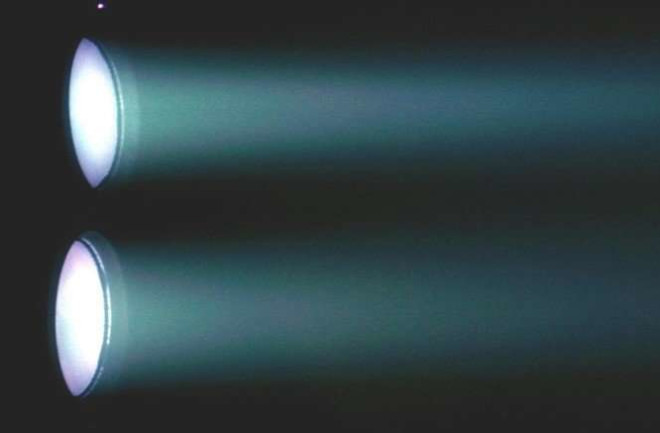 In December, two discs on the bottom of a minibus-sized spacecraft headed for Mercury will start to glow blue. These blue, glowing discs are the solar-powered electric thrusters that will get the BepiColombo mission to Mercury.

BepiColombo, a collaborative mission between the European Space Agency (ESA) and the Japan Aerospace Exploration Agency (JAXA), launched from Europe’s Spaceport in French Guiana on October 20, 2018, and is slated to arrive at Mercury in December of 2025. The spacecraft uses unique solar-powered electric thrusters.

“These electric engines work by ionizing xenon gas, which is accelerated in an electric field and expelled with very high velocity. Upon leaving the engine, the xenon ions lose energy by releasing photons, generating the trademark blue glow,” Christoph Steiger, deputy spacecraft operations manager of BepiColombo said in an email. Accelerating the xenon atoms away from the spacecraft generates an equal and opposite push that serves to move the craft forward.

In mid-December, BepiColombo will begin its first “electric propulsion arc”, a period of sustained propulsion from the glowing blue thrusters. In the seven years that it will take for BepiColombo to reach Mercury from Earth, the craft will go through 22 of these thrust arcs.

“The force generated by these thrusters is very small (we plan to fire one thruster up to 125 milliNewton, which is about the force to hold up a piece of paper), so you have to fire them for a long time to have the desired effect on the trajectory,” Steiger added. “Their advantage is the high efficiency (chemical propulsion can generate much higher thrust, but you need more fuel and hence higher spacecraft weight).”

BepiColombo has four thrusters for redundancy, though only one or two can be fired at the same time, Steiger said. This system is the most powerful electric propulsion system ever flown in space, and it will be crucial in ensuring the craft reaches Mercury, according to a statement.

In addition to moving the craft forward, this unique system will also have to perform a series of braking maneuvers to slow it down. The plan is to decelerate the craft and allow it to fall partially into the gravity wells of a few planets to help it lose momentum for its final approach. It will take a total of one Earth flyby, two Venus flybys, and six Mercury flybys before the craft is placed in orbit around Mercury.

BepiColombo involves three major components that will allow it to complete a comprehensive study of Mercury. First is the Mercury Transfer Module (MTM), which was built by ESA for propulsion.

BepiColombo’s second major component is the Mercury Planetary Orbiter (MPO), which was built by ESA to deploy to the planet and study its surface, interior structure, composition, exosphere, and magnetic field. The third major component is the Mercury Magnetospheric Orbiter (MMO), which was built by JAXA to study Mercury’s magnetic field, waves, and the particles in space around the planet.