How the miracle fruit changes sour into sweet 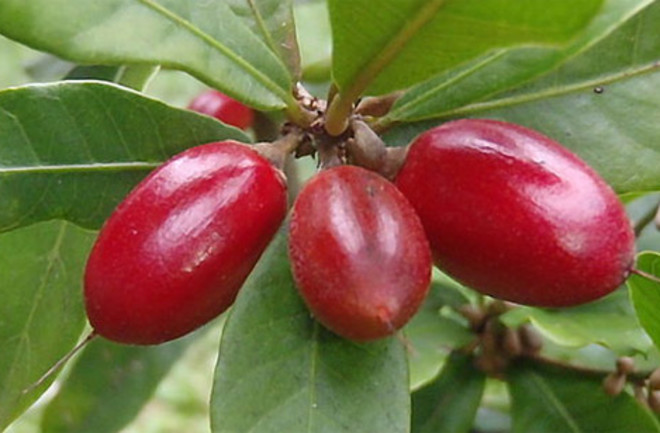 Pop a “miracle berry” into your mouth, and you might wonder if it was named by an overreaching marketing department. The small red fruit tastes of very little – it has a “mildly sweet tang... [like] a less flavorful cranberry”. But it’s not the taste of the fruit itself that matters. To understand why the berry gets its name, you need to eat something acidic. The berries have the ability to make sour foods taste deliciously sweet. Munch one, and you can swig vinegar like it was a milkshake, or bite lemons as if they were candy.

The secret to the fruit’s taste-transforming powers is a protein called miraculin. Now, Ayako Koizumi from the University of Tokyo has discovered just how the protein acts upon our tongues.

Two groups of scientists independently isolated miraculin from miracle berries in 1968, but people have been experiencing its effects for far longer. West Africans have chewed miracle berries (Richadella dulcifica) before their meals for centuries, to get those unusual sweet hits from otherwise sour food. Europeans became aware of the fruit in 1725, when French explorer Chevalier des Marchais described its use.

In the 1970s, an American company called Miralin tried to develop miraculin as a simple way of getting a sugar rush without having to gorge on cakes and sweets. Their attempt was nixed by the US Food and Drug Administration, who decided to classify miraculin as an additive, dooming it to years of further testing. Miralin folded, amid suspicions of foul play from the sugar industry. The miracle berries never quite hit the big time, but they do make occasional appearances at high-class events known as “flavour-tripping parties”.

While party-goers thrilled at the miracle fruit’s tongue-teasing trick, scientists were equally intrigued. Various groups have pored over miraculin’s properties in great detail. Thanks to their efforts, we know a lot about the protein’s structure, and how acidity, temperature and dose affect its taste-altering powers. By comparison, we still know very little about how it actually works.

The general idea is that miraculin changes the shape of proteins on our tongues called sweet receptors. These proteins are normally set off by sugars, but when miraculin disfigures them, they respond to acids too. Suddenly, sour mouthfuls are registered as sweet ones.

According to Koizumi’s experiments, this explanation is not quite right. She showed that miraculin does stick directly to sweet receptors, and it latches on more strongly than do other conventional sweeteners like aspartame or saccharin. In neutral conditions, neither acidic nor alkaline, miraculin stops these other sweeteners from getting a hold on the sweet receptors. It actually represses the receptors, stopping them from doing their job. Under acidic conditions, the opposite happens – miraculin supercharges the sweet receptors. It distorts them into an active shape, while also making them extra-sensitive to sweeteners like aspartame.

Here, then, is what happens when you chomp on a miracle berry. Miraculin sits on your sweet receptors for an hour or so. For most of that time, it silences the receptors, which is why the fruit itself tastes of very little. Whenever you take a bite or swig of something acidic, miraculin gains a few extra protons and changes shape. In doing so, it also changes the shape of the sweet receptors it has stuck to, sending them into a signalling frenzy.

Koizumi also looked at a second taste-changing protein called neoculin. This one comes from the Malaysia lumbah plant; it also converts sourness to sweetness, and it also sticks to sweet receptors. But the similarities stop there.

Amazingly, miraculin and neoculin are completely unrelated. They have different shapes and sizes, they are made from different chains of amino acids, and they stick to different parts of the sweet receptor. Unlike miraculin, neoculin tastes sweet in its own right, and it transforms sour tastes into an even stronger sweet buzz. The miraculous aspect of these two proteins is not that they turn sour into sweet, but that they have evolved to do the same thing through two completely different means.