The world’s ABCs can be traced back to a handy linguistic innovation by the Semites in ancient Egypt. 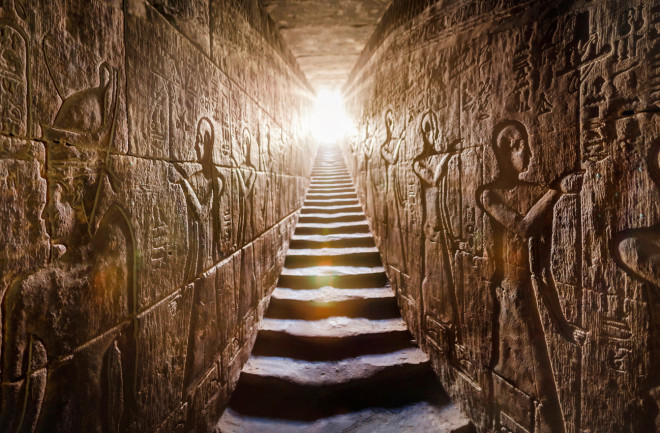 Written English, along with most modern tongues, is so deeply tied to its alphabet that we may take the pairing for granted. But long before Beowulf and The Canterbury Tales, there were alternatives. In fact, although the first evidence of writing comes from 5,000-year-old Sumerian cuneiform, it took another millennium for humans to hit upon the language-ordering method most of us now learn as children.

The language you’re reading here is a latecomer, with a long but traceable heritage. The alphabet seems to have been invented just once, by Semitic workers in Egypt nearly 4,000 years ago. The script they devised, known as Proto-Sinaitic script, was an attempt to repurpose hieroglyphics for their own language.

Egyptologists recovered the first of these inscriptions in the early decades of the 20th century, noting their clear hieroglyphic influence. They were found on the Sinai Peninsula, so scholars assumed that Proto-Sinaitic originated there, around 1600 B.C. Only in the 1990s did Yale Egyptologist John Darnell and his wife, Deborah Darnell, find an older predecessor in the graffiti at Wadi el-Hol, or “Valley of Terror,” a site along the Nile River on mainland Egypt. These were dated to roughly 1800 B.C.

The inscriptions have yet to be fully translated, but some letters have been deciphered. Some even remain plainly visible in English, no translation necessary, after all this time. “M,” for instance, comes to us without much modification; the Semites appear to have borrowed the hieroglyph for “water,” a wavy, undulating line, to represent the initial sound in their own word for water, “mem.” “A” began as an ox-head, but in successive languages quickly morphed into a recognizable shape.

The main difference between the oldest writing systems — also called orthographies — and our modern-day alphabets is in the units of speech they represent. Cuneiform denoted entire words or syllables with wedge shapes. Egyptian and Chinese achieved the same with an array of hieroglyphs and characters. But because languages often include tens of thousands of words and hundreds of syllables, full mastery of these unwieldy schemes demanded a dedication only professional scribes could once afford.

An alphabet, on the other hand, divides words and syllables further into phonemes — the set of fundamental sounds that serve as the building blocks of a language. In English, this amounts to a manageable 26 letters (though the language actually contains 44 discrete sounds). These phonemes can then be combined to form morphemes, the smallest meaningful units of language.

For example, each word in the following sentence is a distinct morpheme: “The house is on fire.” In a non-alphabetic language, some or all of them would be depicted by a single symbol, rather than a string of phonemes.

Technically speaking, Proto-Sinaitic wasn’t actually a true alphabet. More properly, it was an abjad: a writing system concerned first and foremost with consonants, usually leaving the reader to supply vowels based on context and prior understanding of vocabulary and pronunciation. Sometimes, but not always, the vowels are indicated by diacritical marks. (Though they are rare nowadays, notable modern abjads include Arabic and Hebrew.)

The next iteration of the alphabet after Proto-Sinaitic, Phoenician, also omitted its vowels, but with only 22 symbols it was so user-friendly that most people could grasp it with little trouble. It grew in popularity, eventually spreading west along the Mediterranean Sea. Soon the Greeks adopted it, simultaneously giving us the first full-fledged example of an alphabet and a term for it — “alphabet” is derived from the language’s first two letters, alpha and beta.

Greece’s greatest contribution, however, was the addition of vowels. In time, the Etruscans on the Italian Peninsula learned to do the same, then bequeathed the practice to the nascent Roman Empire. The result was the Latin alphabet, which has achieved global domination on a scale exceeding Julius Caesar’s wildest dreams. It’s the foundation of English, and many other languages, thanks to European colonization.

But alphabets and alphabet-adjacent hybrids are nearly ubiquitous around the world. The Cyrillic alphabet — used in Russian and other languages across eastern Europe and central Asia — is descended from Greek. Devanagari — the script of Hindi, Nepali, Sanskrit and a proliferation of South Asian dialects — likely came from a Semitic language (perhaps Aramaic, which Jesus spoke). In a sense, the style of written communication that billions of people employ today is simply an evolution of the hieroglyphs that decorate King Tut’s tomb.