How Tall Are Eruptions on Io and Venus? 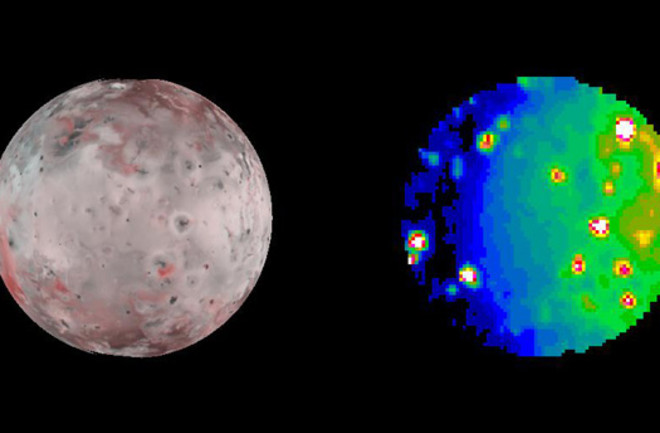 True color and thermal images by the Galileo mission of the surface of Io, where hot colors indicate active eruptions (on right). Image: NASA / JPL, taken May 28, 2002. Earth does not hold the monopoly on active volcanism in the solar system. In fact, Earth isn't even the most volcanically active body in the solar system. Although we have abundant volcanism, to the tune of hundreds to thousands of active and potentially active volcanoes, if you look at the amount of land surface covered by the deposits of recent volcanism, Earth's volcanism is confined to fairly small areas. Even so, volcanism likely played a vital role in getting life started on the Earth -- and maybe it is the driving force in other parts of the solar system. The manifestation of volcanism on other planets is different than on Earth as well -- some places produce giant eruption plumes (like on Io) and some might produce very small plumes (like at the newly-identified potentially active volcanoes on Venus), so why are they so different? Look at a place like Jupiter's moon, Io. This plucky little moon is covered almost wall-to-wall with geologically-recent volcanic deposits (see above) thanks to the tidal forces exerted on it by Jupiter's gravity. When New Horizons passed by Io in 2007, the spacecraft (headed to Pluto-Charon) captured a sequence of frames that showed the giant volcanic plume from TvashtarPatera (along with some fainter plumes from Masubi and Zal; see below). Using the size of Io, you can estimate the height of that prominent plume from Tvashtar Patera, and it comes it at roughly 165 km. That's big, even for terrestrial standards where the tallest plumes we know about might have reached 60-70 km (from the 186 AD Taupo eruption). Now, to give you a sense of how big that plume on the scale of Earth, if an eruption here created a plume as tall as the Tvashtar plume relative to the size of the Earth, it would be over 560 km tall! How tall is that? Well, the International Space Station orbits at a height of between 330 and 435 km. So, why don't we have eruptive plumes as tall as that on Earth? Well, there are a number of factors that control how tall a volcanic plume might be and it can be boiled down a simple equation (well, relatively simple): H = k(MΔT)^1/4. In this equation, H is the height of the plume in kilometers, M is the eruption discharge rate (how much stuff is being erupted per unit time -- usually in m^3/s) and ΔT is the difference in temperature between the erupting material (hot, usually between 750-1200ºC) and the atmosphere (on Earth, relatively cool, hovering between -10-25ºC on the surface). Now, k is little trickier. It can be thought of as an entrainment coefficient that rolls a bunch of factors together related to the atmosphere into which the plume is erupting. More or less, the thicker and more turbulent the atmosphere, the smaller k becomes. This means that on planets with thick, dense, turbulent atmospheres, we should expect that plumes can't reach very high, while planets with thin atmospheres, the plumes can get much taller. UPDATE 5:45 PM March 17: I wanted to add this comment on k and the full plume height equation left by Rudigar Escobar Wolf. I think it helps in understand some of the issues here:

The "k" factor in the H = k(MΔT)^1/4 equation are also a function of the specific heat of the erupted mixture and the efficiency with which heat is transferred from the pyroclasts to the entrained atmospheric fluid, at least in the classical plume models (e. g. Morton 1953 later applied to volcanic plumes by Wilson et al, 1978), so k is not only dependent on the atmospheric properties but also on the erupted mixture properties. Further more, k is also a function of the environmental and adiabatic lapse rates, which determine how easy convection will be mantained, rather than how thick and turbulent the atmosphere is. But maybe more relevant than all this is the fact that in a very thin (or non existing) atmosphere, e. g. Io, the Moon and maybe Mars, this equation is altogether irrelevant! As Wilson explains (in the reference you cite), in a very thin (or non existing) atmosphere, the pyroclasts will follow ballistic trajectories without much interference of the atmosphere (pp 394 - 395).

If we look at some of the other variables, we can begin to see why the plumes of Io might much taller. We can already assume that k is large for Io (compared to Earth), as it has a very thin and tenuous atmosphere (if any), relative to Earth. This means that there is much less pressure on the rising magma, so bubbles form faster, causing fragmentation ... which means an explosive eruption. In a sense, if there are any gases dissolved in the lavas erupted on Io, the eruption will be explosive. If we think about the difference in temperature, Io likely has a much larger ΔT than Earthly eruption, as Io's lavas are thought to erupt at higher average temperatures, closer to ~1300-1400ºC, than those on Earth (typically 750-1200ºC). Io's surface temperature is much lower as well, averaging closer to -130ºC. Both of those factors go to help Io produce taller plumes. What about the eruption discharge rate of eruptions on Io relative to Earth? On Earth, the average discharge rate for large explosive eruptions is in the 100s-1000s m^3/s. The peak eruption rates on Io are thought to be even higher than that, with estimates of ~6,000-18,000 m^3/s. So, even the rates at which eruptions release material into the atmosphere are higher on Io. Put all these factors together, and it is easier to see why the plumes on Io look so enormous in proportion to explosive eruptions on Earth. The key here is that the conditions on Io allow for that magma to fragment easily (if it has sufficient volatiles dissolved in it, like water or carbon dioxide) and fragmentation causes explosive eruptions. So, what happens on the other end of the spectrum?

Volcanism on the surface of Venus, with Gula Mons in the background and an impact crater in the foreground. Image: NASA / JPL This year at the Lunar and Planetary Science Conference, Shalygin and others presented their findings on active volcanism on Venus. Using imagery from the ESA Venus Express mission, they found "bright" spots on the surface of the planet at Ganiki Chasma that were ephemeral -- appearing in one pass of the imager and disappearing in the next, on the timescales of days. Now, there are a number of potential interpretations of these "bright spots", but they interpret as potentially active lava flows or low volcanic plumes. This would be the first observation of active volcanic processes on Venus, although previous missions have shown that much of the surface of Venus looks geologically young (see above; how young is an active debate), so geologic processes are still churning away on the planet. Now, if we think about the controls on volcanic plume heights, we might predict that plumes should be much smaller on Venus. The surface temperature on Venus is ~460ºC, so much higher than either Earth or Io. This means that ΔT is much smaller. We can also assume that k, the entrainment coefficient, is going to be smaller as the atmosphere is much denser and more turbulent than our terrestrial or Ioian atmospheres. Eruption discharge rates on Venus are much harder to estimate because we haven't seen any eruptions actively occurring (beyond the circumstantial evidence from Ganiki Chasma. We can assume, based on first hand observations of the surface of Venus by the Venera lander and by interpretation of landforms spotted by other missions from space that much of the surface of the planet is basaltic. This means that terrestrial discharge rates like apply. Put all these factors together and you can see why we have yet to really spot any real volcanic plume in Venus' atmosphere even though it is only about as thick as Earth's. The plume heights from Venutian eruptions should be significantly shorter that their Earthly counterparts assuming the discharge rates are the same. Overall, surface eruptions on Venus might feel similar pressures as terrestrial submarine eruptions. So, here we have the opposite of Io, where instead of enhancing fragmentation of the magma, we reduce it, causing less explosive punch when an eruption occurs. The more we look around the solar system, the more we see different forms of volcanism, whether it be silicate volcanoes like we have on Earth and Io (and likely Venus and Mars) or the cryovolcanism we've observed on Enceladus, Titan or Triton. Remember, volcanism occurs because excess heat is trying to escape the interior of a planet or moon, so where we find volcanism, we know we have heat ... and heat is one of those key ingredients for life. We don't know if they go hand in hand, but some of the best places to look for life in the solar system might be the places closest to volcanoes. Reference Wilson, L., 2009. Volcanism in the Solar System. Nature Geoscience: vol. 2, pp. 389-397.