With tools ranging from artificial intelligence to gene editing, researchers are revamping agriculture for an uncertain future. 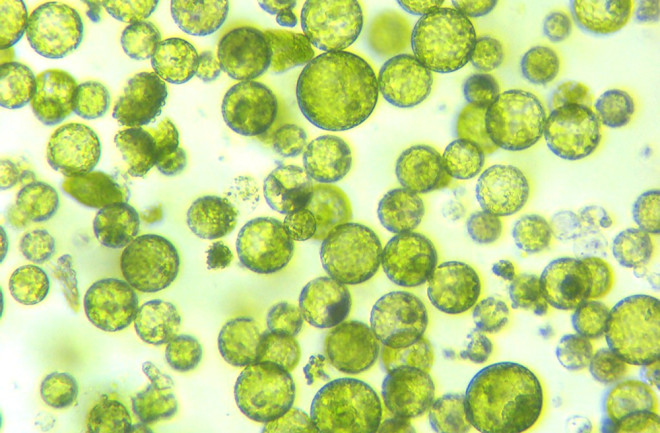 In Kansas, a small team of scientists is working on what they hope will be the grain of the future. To the untrained eye, the long-stemmed, seed-topped wheatgrass looks quite similar to the normal wheat that sways in farm fields across the central U.S. But researchers at a nonprofit called The Land Institute, based in Salina, Kansas, have spent decades fine-tuning their flagship product with year after year of selective breeding.

Today, they say that Kernza brings higher yields and can contain more seeds per stem than average wheat. And the crop is perennial, meaning it returns each year without the need for tilling and replanting. That helps keep carbon in the ground and cuts down on the need for chemical herbicides. And because their roots remain in the soil, perennial crops are a powerful defense against soil erosion.

Not many farmers are growing Kernza today — just over 100, according to the Land Institute. But the organization is hoping its carefully tailored grain will begin winning hearts, minds and stomachs around the country as cultivators begin searching for new, better crops.

Kernza is just one example of what seems poised to be the next wave of agricultural innovation. Custom crops — hybridized through breeding programs or tweaked with genetic engineering technologies to deliver higher yields while withstanding more extreme environmental conditions — have become more prevalent (and more sophisticated) than ever before.

The newest modified crops are arriving just in time: Climate change puts farmers around the world under increasing pressure as droughts and heatwaves intensify and precipitation patterns become more erratic. Major droughts in the central U.S., Australia and Europe in recent years have imperiled food production while driving some farmers to bankruptcy. That’s pushing agricultural operations to rely increasingly on groundwater reserves in many places, further straining aquifers.

Exacerbated droughts are particularly worrying. A major one could kick off a vicious cycle of agricultural collapse, rising food prices and famine in some parts of the world. Even the U.S. may not be immune: One study examining the effects of a potential modern-day Dust Bowl found that a similarly catastrophic drought could cause the country’s corn and soy yields to drop by around 40 percent and what yields by around 30 percent in just a year.

Those perils come amid a rapidly expanding global population that will require higher crop yields. Our planet could host nearly 10 billion people by the year 2050, according to UN estimates. That’s another roughly two billion mouths to feed. The challenge for humanity is painfully clear: improve our agricultural practices, or suffer the consequences.

Humans have altered the crops we eat since nearly the dawn of agriculture. As the industry grew, farmers selected for crop varieties with more desirable qualities like higher yields. This in turn influenced the genetic makeup of crops like wheat, rice and much more — the very first example of genetic engineering.

Crops like Kernza, which has been bred selectively for generations, are just the latest iteration of a millennia-old process. Today, newer tools like artificial intelligence and genetic sequencing enable scientists to mix and match crop varieties with unprecedented precision. Researchers are already exploring ways to create hybrid crops tailored for the conditions of specific regions: More drought tolerant here, more resistant to local pests over there.

As our technological capabilities have expanded, they've also brought new ways to shape plants. Hybridization between species has offered farmers a way to introduce new traits into their crops for decades. Four decades ago, scientists began using a type of bacteria called Agrobacterium to insert genes into plants by way of horizontal gene transfer. By the 2000s, a number of crops, from cotton to soybeans to tobacco, had been approved for genetically modified varieties. Today in the U.S., 94 percent of soybeans and 92 percent of corn planted by farmers include genetic additions, according to the Food and Drug Administration.

Many of those modifications can be considered minor, such as conferring resistance to various pests to cut down on chemical pesticide use. Others help even after a crop is harvested, like a new variety of potato that is more resistant to browning, extending their shelf lives. Overall, the adoption of crops with genetic modifications has reduced pesticide use by 37 percent around the world while increasing yields by 22 percent, according to a 2014 meta-analysis.

As they look to a future that promises new perils for agriculture, scientists are also pursuing more ambitious targets for genetically modified crops.

One of the most high-profile projects: Golden Rice, in which inserted genes produce beta-carotene that our bodies eventually turn into Vitamin A. Millions of people around the world experience Vitamin A deficiency, and the modified rice seems to promise an easy solution. But decades of opposition from environmental groups, farmers and others has stymied Golden Rice’s progress. Though it remains a viable option, the “miracle” crop has yet to see widespread adoption.

Scientists are also applying gene editing to a broad variety of plant species. Much of this preliminary work relies on CRISPR gene editing technology, which allows scientists to snip apart DNA strands and insert new genes into both human and plant material alike.

An Iowa-based group working with corn says its modified variant delivers higher yields under drought conditions than typical ones. Undeterred by the Golden Rice controversy, a team in Guangzhou, China is testing four versions of a rice species, each with a different gene added by way of CRISPR. Some of the most promising variants produced rice plants with more or larger grains, potentially increasing yields, they say.

Other research aims to help crops better endure diseases — and even provide visual appeal to consumers. Work with CRISPR could give tomatoes with longer shelf lives, for example, or even different colors like pink or yellow. Similarly, genetic engineering might protect grapes from harmful fungi, and cucumbers from plant viruses.

Yet engineered crops could hold benefits beyond firmer fruits and more vivacious vegetables. As a recent editorial in Nature Plants notes, some scientists aspire to use CRISPR or other genetic engineering methods to teach plants to convert nitrogen from the air into food for their own growth.

Nitrogen is an essential nutrient for plants, and farmers rely on commercial fertilizers to deliver it in the enormous quantities necessary for commercial agriculture. But most legumes, which include soybeans, chickpeas and peanuts, fix nitrogen themselves, thanks to symbiotic relationships with bacteria. If we could extend that ability to all plants, with methods like inserting new genes into plants that don’t currently transform nitrogen, it would drastically reduce the world’s reliance on chemical fertilizers.

Other researchers are hoping to improve upon the age-old process of photosynthesis, in which plants convert sunlight into energy. Photosynthesis is a complicated process that involves a multitude of steps, some of which aren’t as efficient as they could be. By tweaking the chemical reactions involved, some researchers have found ways to increase the amount of energy plants get from photosynthesis, effectively giving them more bang for their buck. More energy could equal higher yields and more robust plants.

The crops of the future may not look very different from the ones we eat today. Corn will likely be yellow, and apples may remain red. But changes to the plants that create them, whether that involves making them hardier in the face of droughts or immune to viruses and fungi, are already underway in labs and farm fields around the world. The story of humanity’s spread across the globe is intertwined with our ability to reliably produce food for ourselves — though agriculture has continually shifted due to both a changing climate and people's needs, that fact, at least, will almost surely remain the same.