How Many Galaxies Are There in the Universe? The Redder We Look, the More We See

Ethan Siegel is a theoretical astrophysicist living in Portland, Oregon, who specializes in cosmology. He has been writing about the Universe for everyone since 2008, and can’t wait for the launch of the James Webb Space Telescope. A different version of this post appeared on his blog, Starts With a Bang.

“It is by going down into the abyss that we recover the treasures of life. Where you stumble, there lies your treasure.” —Joseph Campbell

One of the bravest things that was ever done with the Hubble Space Telescope was to find a patch of sky with absolutely nothing in it—no bright stars, no nebulae, and no known galaxies—and observe it. Not just for a few minutes, or an hour, or even for a day. But orbit-after-orbit, for a huge amount of time, staring off into the nothingness of empty space, recording image after image of pure darkness.

What would we find, out beyond the limits of what we could see? Something? Nothing? After a total of more than 11 days of observing this tiny area of the sky, this is what we found:

The Hubble Ultra Deep Field—the deepest view ever of the Universe, was the result. With all those orbits spent observing what appears to be a blank patch of sky, what we were really doing was probing the far-distant Universe, seeing beyond what any human eye—even one aided by a telescope—could ever hope to see. It took literallyhundreds of thousands of seconds of observations across four separate color filters to produce these results.

What you’re seeing—in practically every point or smear of light—is an individual galaxy. The result gave us the information that a very large number of galaxies exist in a minuscule region of the sky: around 10,000 in the tiny volume surveyed by the Hubble Ultra Deep Field image, below. 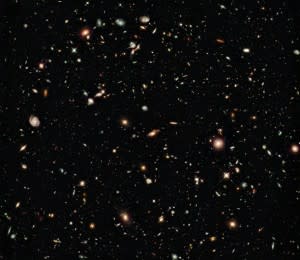 By extrapolating these results over the entire sky (which is some 10 million times larger), we were able to figure out—at minimum—that there were at least 100 billion galaxies in the entire Universe. I even made a video about it.

So that’s exactly what we did, looking for a total of 23 days over the last decade—more than twice as long as the Ultra-Deep Field—in an even smaller region of space. (There are over 1,000 observing proposals submitted to Hubble every cycle, so getting that much time, even spread over a decade, is remarkable.) Ladies and Gentlemen, may I present to you the Hubble Extreme Deep Field! 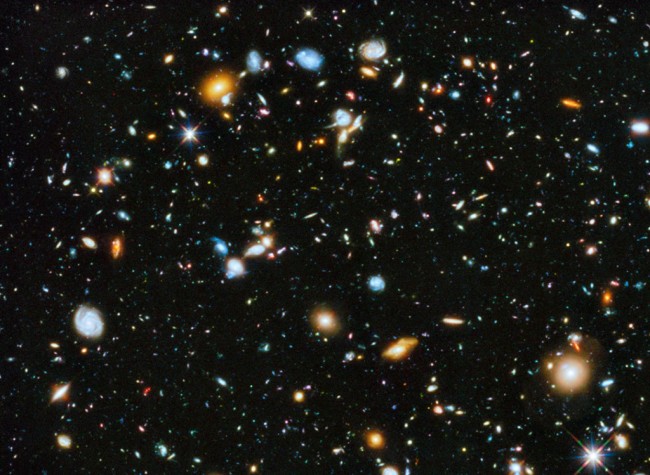 This picture may look familiar to you, even though you’ve probably never seen it before. The Extreme Deep Field (or XDF) is actually a part of the Ultra Deep Field, which you can see for yourself if you rescale both images and rotate them at 4.7 degrees relative to one another, as I did here.

The XDF has far more galaxies in it than the HUDF does in a comparable region of space. Take a look for yourself at a small portion of these images, compared side-by-side with one another, and you can clearly see how many more galaxies there are in the XDF with your own eyes. 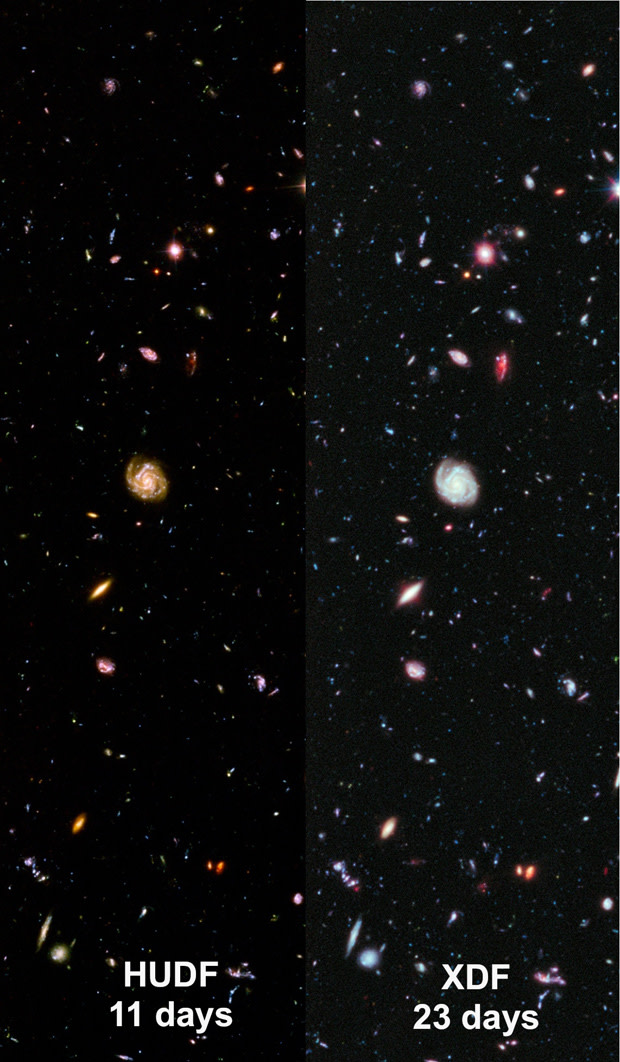 Sure, the Ultra-Deep one (at left) is very impressive, especially considering that—by all appearances—this is just a blank patch of featureless sky. But there are maybe 75% more galaxies-per-patch-of-sky in the XDF! Applying the XDF results to the entire sky, we find that there are more like 176 billion galaxies in the entire Universe, a huge increase from our previous estimate from the HUDF.

How do we estimate that there are so many? For starters, the area of the XDF is just a tiny, tiny fraction of the full Moon. 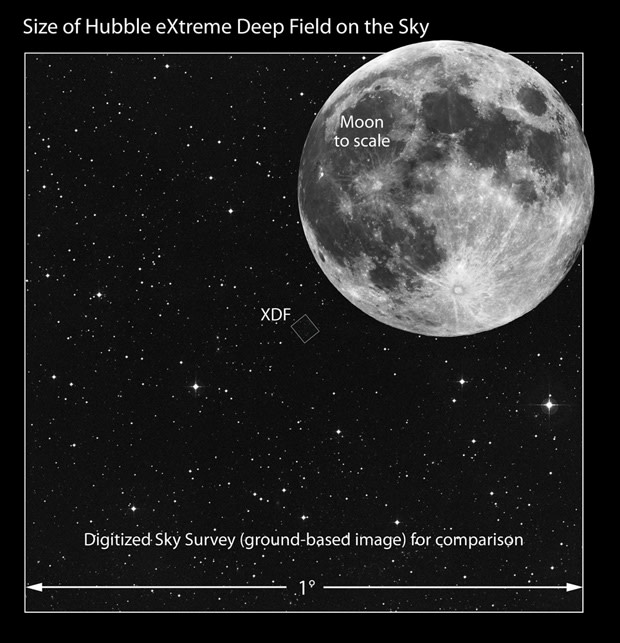 If you assume that the XDF is a typical region of outer space, you can calculate how many XDFs it would take to fill the entire night sky; it’s about 32 million. Multiply by the number of galaxies you find in the XDF—which is around 5,500—and that’s how we arrive at 176 billion galaxies, at least, in the Universe.

But there’s more to the story than that.

But even the XDF is not optimized for finding these galaxies; we’d need an infrared space telescope for that, which is what James Webb is going to be. When that comes around, I wouldn’t be surprised to find that there are maybe even close to a trillion galaxies in the observable Universe; we just don’t have the tools to find them all yet. In the meantime, our best tool—the Hubble Space Telescope—is showing us that the deeper we look, the more we’ll continue to be rewarded with new, faint, and distant galaxies, as well as richer details in the already discovered ones.

It makes me so impatient for a more powerful telescope with the ability to see far into the infrared, because I can’t help but wonder what’s still invisible to even the XDF. Twice as many galaxies? Four times? Fainter ones, redder ones, more distant ones, or all of them? There’s at least 176 billion of them in our Universe, but I can’t help wonder, “how many more?”

The new Hubble Extreme Deep Field is the deepest view into the Universe. Ever. What else is there to say? Enjoy the view, discover what’s we’ve just found, and marvel at what else lives there, just beyond our sight. It’s just the tiniest fraction of the whole Universe, like we’ve never seen it before.