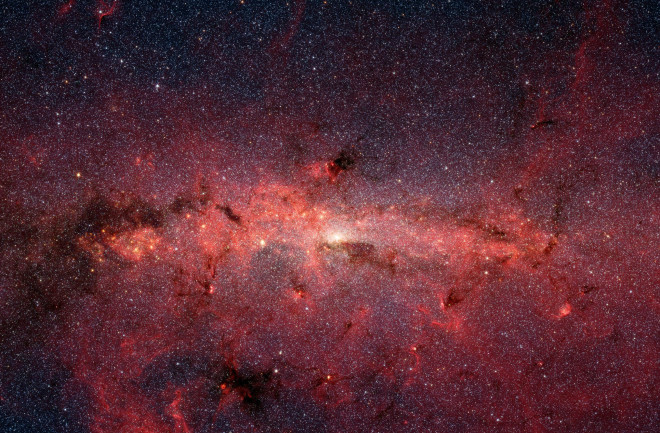 The center of the Milky Way, viewed in infrared. It allows astronomers to see deep into the crowded center of our galaxy, normally obscured by dust. (Credit: NASA, JPL-Caltech, Susan Stolovy (SSC/Caltech) et al.)

When astronomers study stars and galaxies in visible light, they’re plagued by the dust that fills galaxies and sometimes blocks objects from view. Look at a photograph of the Milky Way on a dark night and you'll notice clouds obscuring much of the galaxy — those are dust clouds. This is an especially big problem for researchers who want to study the center of the Milky Way or other galaxies, which are often shrouded in thick clouds of dust.

But visible light is just part of the broad spectrum of electromagnetic radiation, mostly invisible to human eyes, that astronomers can capture with telescopes. Some wavelengths of infrared light can pass through dust, so looking at the infrared light coming from the center of the galaxy gives astronomers a window into this hidden world.

Infrared light can also be key for studying objects like planets and asteroids that aren't hot enough to shine in visible light but glow in infrared. As an infrared space telescope, the Spitzer Space Telescope played a key role in broadening astronomers’ views of the universe — a role from which it is stepping down as NASA plans to retire the telescope Jan. 30.

Spitzer's position in space lets it avoid interference from Earth’s atmosphere that plagues telescopes on the ground. And, crucially, its ability to see in infrared allowed Spitzer to study objects that are hidden to telescopes that see in visible light and gain new views that complement astronomers’ work in other wavelengths.

Where visible light gets blocked by dust, some wavelengths of infrared shine through. When astronomers point infrared telescopes toward the center of the Milky Way, they can see stars that speed around the supermassive black hole in the galaxy’s center, for instance. And when Spitzer turned its gaze toward the centers of distant galaxies, it was able to spot infrared light from material falling into these supermassive black holes.

“The optical image doesn’t show you anything. But in the infrared, we can pick up the emission of material falling into the supermassive black hole,” said Varoujan Gorjian, a Spitzer Research Scientist at NASA's Jet Propulsion Laboratory, during a panel discussion about Spitzer that was broadcast on Jan. 23.

Watching the skies in infrared also lets astronomers study objects that aren’t hot enough to emit in more energetic wavelengths like visible or ultraviolet light. Planets, for example, aren’t hot enough to emit visible light but can glow in infrared. Studying the infrared light from planets in our solar system has revealed new features that weren’t otherwise visible, like a batch of cyclones at Jupiter’s south pole, or a massive, invisible ring around Saturn.

Astronomers have taken advantage of infrared to look at planets in other solar systems, too. An exoplanet may be an invisible speck next to the glare of its star in visible light, but in infrared, it stands a chance of being spotted. So far, astronomers have managed to take images of a handful of exoplanets in infrared light.

Spitzer took this one step further. In 2007, researchers used Spitzer to study the infrared light from HD 189733b, an exoplanet about 60 light-years away. They were able to capture variations of the planet’s infrared brightness, and thus temperature, across the surface of the planet, making the first “weather map” on an exoplanet.

And there are so many more celestial objects that astronomers can study with infrared observatories like Spitzer.