Prosecutors and forensic researchers say DNA evidence is not so cut and dry. 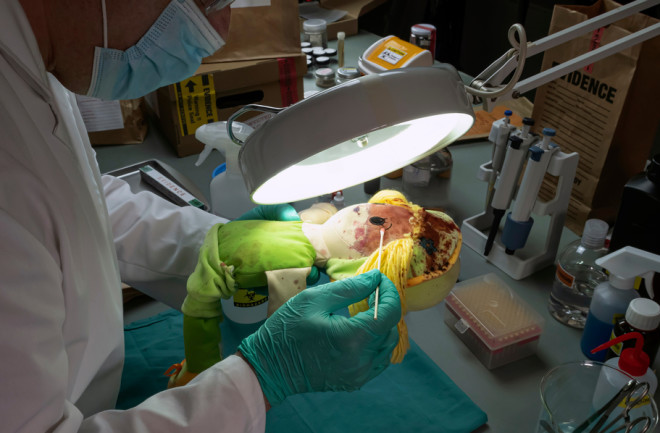 None of us know where our DNA has been. More aptly, we don’t know where it has incidentally traveled to without us. But this does happen, occasionally placing innocent people’s DNA at brutal crime scenes, and adding troubling twists to real-life courtroom cases.

It sounds like the premise of a dramatic thriller movie. And it’s something that forensic scientists are trying to understand better.

In the forensics world, they call this traveling DNA scenario indirect or secondary DNA transfer. Essentially, this occurs when an individual’s DNA spreads to objects and places via other human carriers. Depending on the material where it settles, it can be indirectly transferred as many as six times, according to Cynthia Cale, an independent forensic consultant who specializes in secondary DNA transfer.

“You could have a secondary transfer occur in as little as 10 seconds,” Cale says.

This type of DNA spread led to the arrest of Lukis Anderson in 2012. The 25-year-old homeless man in San Jose, California was accused of murdering a wealthy investor who lived more than 10 miles away.

Three intruders broke into the investor’s home and then bound him and his wife. The investor died from asphyxiation while gagged. Police found two perpetrators’ DNA at the crime scene and then Anderson’s DNA on the victim’s fingernail.

Santa Clara County public defender Kelley Kulick was assigned to the case. Her office’s investigator found that Anderson had been detoxing in the hospital the entire time the crime was committed. “He was held in the hospital on 15-minute bed checks all night. There was no way he could have committed the homicide,” Kulick says.

Her team, she adds, traced Anderson through the night of the crime. He had been publicly intoxicated and a store owner called the paramedics. The same ambulance that brought Anderson to the hospital picked up the homicide victim just hours later. The same paramedics who treated Anderson later responded to the homicide victim. Their equipment, including the finger pulsometer, was used in both cases.

“That meant that Lukis and the victim never had any contact at all,” Kulick says. Anderson was cleared of the crime. Three men were later convicted in the investor’s murder.

Kulick again relied on secondary DNA transfer in a June 2020 acquittal for a client accused of sexually assaulting and murdering his girlfriend’s toddler. Kulick said small amounts of her client’s DNA was found on the child, but so were five other people’s.

The victim, Kulick says, lived in a dirty house where DNA accumulated more easily than a home with regularly sanitized surfaces. Her defense team attributed the trace amounts of her client’s sperm cells found on the victim’s clothing to shared laundry. (Experiments confirm that sperm cells can survive machine washing.)

Kulick’s team suspected the toddler’s mother had abused her child to death. Three months after her client’s acquittal, the child’s mother was found guilty for allowing her son to be abused — by the already acquitted defendant — and then covering up the abuse.

During her client’s trial, Kulick’s team hired a DNA expert who educated the jury about DNA evidence and secondary transfer. She says the judicial system is slow to accept secondary DNA transfer as a plausible defense. “It rattled what we believe is the gold standard. We like certainty and when suddenly DNA can’t be relied upon, people don’t like that,” Kulick says.

DNA on the Stand

Crime-scene DNA testing began in the 1980s, when investigators relied on samples such as blood or semen that could produce clear DNA profiles. In 1997,  an article in Nature identified that secondary DNA transfer was possible.

Cale says that testing became more sophisticated and sensitive in the early 2000s, which meant that investigators could detect DNA from objects and bodies. Problematically, they didn’t always understand that such DNA might have attached to the object from a secondary, not a primary transfer.

“The idea of it has been around for a while, but there were skeptics who thought it was not going to happen in real life,” Cale says.

In a strange twist, real-life indirect DNA transfer has inspired Hollywood thrillers. Movie theaters are currently showing Stillwater, a drama starring Matt Damon that is based on the conviction of Amanda Knox, an American college student convicted in Italy for the murder of her roommate. The Italian Supreme Court acquitted Knox in 2015, partly due to evidence contamination and a misunderstanding of how DNA transfers.

A new understanding of indirect DNA transfer contributed to Knox’s exoneration. Knox’s boyfriend didn’t have to touch the victim or clothing for his DNA to spread to her clothing. And neither Knox or her roommate had to touch the knife in order for their DNA to pass on.

Knox’s wrongful conviction cost her four years in an Italian prison and another three trying to clear her name. In 2015, the Italian Supreme Court’s report established the third defendant was the crime’s only perpetrator. Although juries and judges have overcome their skepticism in select cases, Kulick says acquittals often come months or years after the defendant’s life was interrupted.

Both Cale and Kulick say more research is needed to help scientists learn more about indirect DNA transfer. For example, in a given scenario, scientists can detect trace DNA on a person or object, but they can't confirm how the DNA transferred or how long it has been there. That leaves prosecutors, judges and juries with many unanswered questions.

The case against Anderson was unique because the shared ambulance provided a timeline and Kulick was able to convince prosecutors to drop charges against her client. Without the precise timeline, Kulick anticipates prosecutors won't be persuaded and defense attorneys will have to try to educate and convince a jury.

"Once law enforcement and prosecutors lock into a narrative, it's very hard to back out," Kulick says.