How Humans Could Go Interstellar, Without Warp Drive 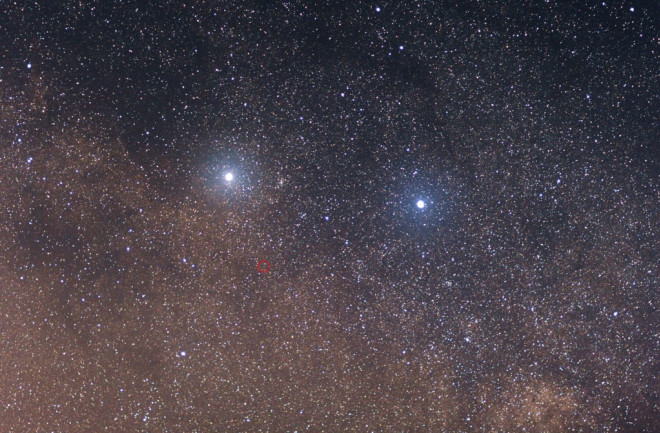 The field equations of Einstein’s General Relativity theory say that faster-than-light (FTL) travel is possible, so a handful of researchers are working to see whether a Star Trek-style warp drive, or perhaps a kind of artificial wormhole, could be created through our technology.

But even if shown feasible tomorrow, it’s possible that designs for an FTL system could be as far ahead of a functional starship as Leonardo da Vinci’s 16th century drawings of flying machines were ahead of the Wright Flyer of 1903. But this need not be a showstopper against human interstellar flight in the next century or two. Short of FTL travel, there are technologies in the works that could enable human expeditions to planets orbiting some of the nearest stars.

Certainly, feasibility of such missions will depend on geopolitical-economic factors. But it also will depend on the distance to nearest Earth-like exoplanet. Located roughly 4.37 light years away, Alpha Centauri is the Sun’s closest neighbor; thus science fiction, including Star Trek, has envisioned it as humanity’s first interstellar destination.

In 2012, a planet was identified orbiting closely around Alpha Centauri B, one of three stars comprising the Alpha Centauri system. Three years later, astronomers were unable to find that same planet, but if it exists it would be too hot for life anyway. What we really want to know is whether planets exist further out from the two main stars, or whether their much smaller, dimmer companion star, Proxima Centauri, located just 4.24 light years from Earth, has planets of its own.

Very soon, these questions will be answered by the James Webb Space Telescope(JWST) that NASA will be launching into space in 2018, and by other instruments that will follow, instruments capable of more than merely detecting a planet’s presence. They will also be able to read the chemical composition of planetary atmospheres.

Imagine this: If there’s an Earth-like planet around Alpha Centauri or another nearby star system, astronomers will know about it within a decade or two — certainly long before we can build a ship like the Enterprise.

Maybe we could consider flying under the speed of light.

It is not widely known, but the US government spent real money, tested hardware and employed some of the best minds in late 1950s and early 60s to develop an idea called nuclear pulse propulsion.

Known as Project Orion, the work was classified because the principle was that your engine shoots a series of “nuclear pulse units” — atomic bombs of roughly Hiroshima/Nagasaki power — out the back. Each unit explodes and the shockwave delivers concussive force to an immense, steel pusher plate, which is connected to the most immense shock absorber system that you could imagine.

The researchers calculated that the ship could reach five percent the speed of light (0.05 c), resulting in roughly a 90-year travel time to Alpha Centauri. The Nuclear Test Ban Treaty of 1963, which forbade nuclear explosions in the atmosphere, and the Outer Space Treaty of 1967, which forbade nuclear explosive devices in space, effectively ended Orion.

In his epic TV series Cosmos, Carl Sagan noted such an engine would be an excellent way to dispose of humanity’s nuclear bombs, but that it would have to be activated far from Earth. But back when Orion was being funded, amazingly, the plan was to use the nuclear pulse engine even for launching the vessel, in one massive piece, from the surface of Earth. Suffice it to say it does not seem likely that we’ll every build a nuclear pulse ship, but it’s something that we already have the technology to build.

But what about a less explosive, cleaner propulsion system that could achieve the same end? The British Interplanetary Society took on this goal in the 1970s with Project Daedalus. Named for the inventor from Greek mythology who built wings to escape the island of Crete, the design was based on projected development of inertial confinement fusion (ICF), one of two main strategies for generating nuclear fusion energy on Earth.

The other strategy is magnetic confinement fusion (MCF), and similar to ICF, designs exist for adapting MCF to space propulsion. Like Orion, a Daedalus craft would have to be rather large. But using deuterium and helium-3 (obtained from the lunar surface, or from Jupiter’s atmosphere) as fuel, Daedalus craft could reach 0.12 c, cutting travel time to Alpha Centauri to something like 40 years.

There are other ingenious ideas, such as the Bussard ramjet that could approach the speed of light, but the size of the engines and technological gaps that we must fill become so large that they may not seem easier than warp drive. So let’s limit our discussion to capabilities up to the neighborhood of the 0.12 c of Daedalus as we consider what form a human interstellar voyage might take

Effectively, the ship is a space colony. It contains a large population — current estimates are that a minimum of tens of thousands of colonists are needed for a healthy gene pool — and all that is needed for people to live comfortably, but it follows a trajectory out of the solar system. Ideas for an interstellar ark taking millennia to reach a destination date back to the fathers of the Space Age — Russia’s Konstantin Tsiolkovsky and America’s Robert Goddard— — the idea really set sail with mid 20th century science fiction writers.

In a two-part novel series written in 1941, Robert A. Heinlein wrote of a vessel that took so long to reach its destination that the people aboard had forgotten they were on a ship. Instead, they believed the large craft to be their natural world.

Sending colonists on a voyage lasting centuries or millennia raises social questions, such as whether it is ethical to commit unborn generations to live out their lives in transit between planets.

10,000 years is a rather long time and means a large number of generations to commit to the interstellar void. But if we’re talking 40 or even 90 years, that’s probably more palatable to many more people. Still, it raises questions as to who would volunteer for such an expedition.

But what about people with shorter attention spans and what if we have no will to build enormous, moving colonies?

Here’s another science fiction strategy: sending cryopreserved human embryos, or gametes (ova and sperm) into deep space. Upon reaching the destination star system, the embryos would be developed. This would require an artificial uterus, which we don’t have yet, but like fusion, here we’re also talking in terms of a matter of decades.

At some point in this century, motherless birth could become a technological reality. Theoretically, we’ll be able to send cryopreserved embryos through space, for centuries if needed due to propulsion limitations, and set them to develop into full-term infants on the new planet.

Then, all you need are robot nannies to raise and educate the infant colonists. And if there’s one area of technological progress that people are supremely confident will keep advancing at warp speed, it’s robots and artificial intelligence.

The egg ship concept is loaded with ethical questions, which can be hashed out in the comments section.

As technically ambitious as it may sound, medical science is making incremental progress toward a safe form of human hibernation.

Currently, it’s routine to lower a patient’s body temperature intentionally by a few degrees, thereby inducing a mild hypothermic coma, following cardiac arrest. This enables the brain to recover after oxygen has been cut off, whereas remaining at normal body temperature results in what’s called reperfusion injury.

Not routine yet, but now under clinical trials, trauma surgeons are cooling patients down to just above freezing temperature in cases of severe blood loss. This is true suspended animation. It’s done just for two hours, or possibly three, stalling death so that injuries can be repaired and blood replaced, but the person is basically hibernating during that time.

With incremental progress, the procedure may eventually be extended to time frames of many hours, and eventually days or weeks to treat other conditions. Perhaps, in time, we’ll put people to sleep long enough, and with enough supervision by computers, to slumber away for an entire interstellar voyage the way you now doze off for a transoceanic flight.