Flicks like ‘Jurassic Park’ and ‘The X-Files’ have left their mark on academia and inspired future researchers. Thanks to science advisers, studios can finally get the details right. 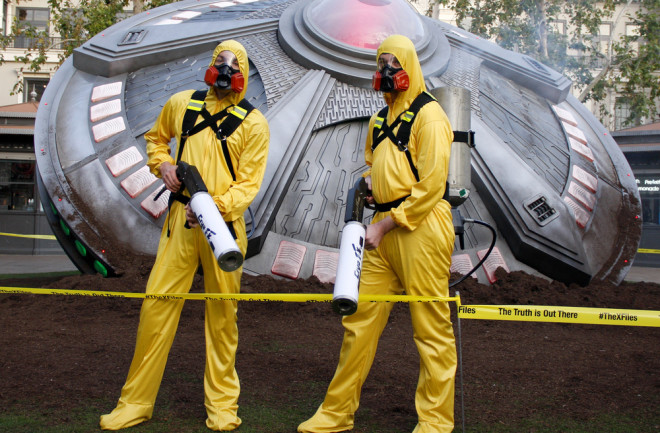 While onscreen depictions of stretchy mutants or a toilet-terrorizing dinosaur may seem completely independent from real-life research, movie and TV production crews have spent decades seeking out scientists to fact-check scripts and special effects.

Propelled by the science fiction boom beginning in the 1970s, Hollywood has since solicited expert knowledge to make scenes more plausible.

As it turns out, even the wackiest plots can benefit from some expert knowledge. For example, Anne Simon, a virologist at the University of Maryland and consultant on The X-Files, broke it to the series creator that a virus couldn’t, in fact, theoretically transform into a monster. (It could, however, transform cells into terrifying creatures.)

The benefits go both ways: Conversely, popular media has even helped spark research developments and garner funding in science fields. And in the last decade, it’s become far easier to bridge the worlds of science and fiction:

Since the National Academy of Sciences established it in 2008, the Science & Entertainment Exchange by pairing filmmakers with researchers from specific fields.

Previously, the entertainment industry had to track down experts on their own, says David A. Kirby, author of Lab Coats in Hollywood: Science, Scientists and Cinema.

Special effects artists have long sought out researchers for help with highly specialized visuals, like the look of certain chemical elements, says Kirby, a professor of science and technology studies at California Polytechnic State University. TV and movie creators have also connected with universities near their filming locations. Physicist Clifford Johnson and other scientists from the University of Southern California are often requested for consulting, in part due to their proximity to studio lots.

Now, the Science & Entertainment Exchange simplifies the adviser search and helps facilitate technical knowledge on set. Yet the pool of experts reduces when directors begin to prefer particular researchers. “There are certain scientists who have done enough consulting and they understand what the filmmakers want, which is good,” Kirby says. “But it’s become sort of self-selecting … the number of consultants that they’re sending out is shrinking a bit.”

Simon, meanwhile, stumbled onto The X-Files by coincidence. She began working with creator Chris Carter, who is a family friend, after he ran into her mother at a party. At the time, Carter lamented that he already found a physics consultant (his brother), but needed a biologist to look over his scripts. Her mother suggested that Carter give her a call. “I was so excited,” Simon says. “Before The X-Files, it was really bad how science — and scientists — were being presented.”

Until relatively recently, popular media neglected fact-checking and mostly offered negative, mad scientist-oriented stereotypes. A survey of more than a thousand horror films from 1931 to 1984 found that a third portrayed “scientists or their creations as villains or monsters,” while merely 11 percent painted them as heroes. Later, a 2003 study similarly concluded that even “good” movie scientists (across genres) commonly succumbed to evil and corruption.

Onscreen researchers also typically lacked complex storylines, or even details of their personal lives, the 2003 article found. That’s a problem because most people don’t know scientists themselves and form opinions based on the media they consume, Simon says, leading to a dehumanizing effect. “You want people to realize that scientists are just people who like to solve puzzles,” she says.

Factual errors and one-dimensional portrayals have real-world consequences. As of 1981, people who frequently watched TV were more likely than occasional viewers to mistrust science, view it as dangerous and reject the entire career path. That’s the primary reason why researchers like Simon and Carl Sagan say they work on Hollywood projects: to counter these misconceptions.

Representation has improved in recent decades, according to Kirby, likely because it’s far more common to recruit science consultants. Now, audiences expect more sophisticated explanations behind far-out plots. “You can’t really get away with the goofy stereotypes that you used to,” he says. He finds that Hollywood now tends to heroize scientists, but glorifying the profession has its downsides: It may obscure the fact that researchers are human and can make mistakes.

And while the concept of scientific accuracy may seem like a black-and-white issue, there’s nothing straightforward about dealing with imagined creatures and other extraordinary scenarios. The supernatural happenings in The X-Files aren’t backed by hard data, but Simon was able to offer her best explanation for a human-fish mutant (a human egg that fused with a fish cell).

Even with unlikely events, like a “Mt. Everest-sized” comet zooming toward Earth, filmmakers can acknowledge concrete facts — albeit with artistic license. Though the 1998 film Deep Impact mentions the delay in video signals between Mars and Earth, the movie’s 20-second lag is far shorter than in reality (roughly 20 minutes).

Often, production teams can’t afford to get all the details right or feel that specific facts could derail the storyline, Kirby says. As a result, some TV shows and films gloss over blunders because they’d only be obvious to certain experts.

To navigate the murky fictional waters, advisers usually establish a line they’re not willing to cross — most times, it’s scenarios that clearly violate current findings. Additionally, Simon says she would never associate herself with productions that promote harmful misinformation, like railing against vaccines or genetically modified organisms (GMOs). Experts should exercise particular caution when script narratives include health-related myths, like the eugenicist belief that criminality is a genetic trait, Kirby notes.

Still, Kirby found, the scientific community is more open to onscreen speculation than landing outlandish ideas in academic journals. In fact, some out-there theories injected by film consultants have sparked scholarly debate outside of theaters. Jurassic Park paleontology consultant Jack Horner encouraged the filmmakers to imply that birds evolved from dinosaurs, an idea that was controversial at the time but has since gained traction.

Read More: Did All Dinosaurs Have Feathers?

Popular media can also raise awareness about, and indirectly boost funding for, certain fields. Outbreak (1995) and Contagion (2011) snapped viewers’ attention toward pandemics, Kirby says, and the CDC leveraged the latter in meetings to demonstrate why its work matters. Deep Impact and Armageddon (1998), meanwhile, may have helped government officials rally behind NASA's Near-Earth-Object (NEO) program.

Hollywood has directly funded studies, too. While science advisers usually work for free, they sometimes accept studio donations to their academic research. Production companies have also paid museums and labs to film at their locations.

Science consulting can even help with grant applications. National Science Foundation (NSF) grants require that a project’s impact reaches beyond the lab, so applicants can claim that their advising work helps advance the public’s scientific literacy. The NSF therefore embraced Simon’s X-Files work — but she originally concealed her consulting because she worried it would threaten her career.

While it may have carried a stigma a few decades ago, Kirby has found that media advising work is now “a mark of honor” among scientists. “They all want to do it,” he says. “Every time I give a talk, I’ve got at least half a dozen scientists saying, ‘How do I get to do this?’”

Multidimensional portrayals of scientists and their work can also galvanize young people to enter STEM fields. This is evident in the Scully Effect, which theorizes that The X-Files character Dana Scully motivated young women to pursue science careers. As one of the first prominent onscreen female scientists, the skeptical medical doctor and FBI agent also made ripple effects within the entertainment industry, allegedly influencing characters like forensic anthropologist Temperance “Bones” Brennan from Bones.

As a result, more than 60 percent of women familiar with Dana Scully say that she “increased their belief in the importance of STEM,” according to a 2018 survey by the Geena Davis Institute on Gender in Media. The show’s more devoted viewers were more likely to respond that girls “should be encouraged to study STEM,” the survey also reported.

Simon has seen the effect of affirming yet nuanced depictions play out in her own classroom. She once asked her freshman introduction to biology course whether The X-Files had inspired them to study science — about two-thirds of students raised their hands. “They’re seeing a positive portrayal of science and it’s affecting people going into it,” she says. “It was terrific that a television series literally influenced a generation.”