Researchers are formulating unconventional solutions for tree diseases that harm beloved foods like oranges and chocolate. These include a potential RNA therapy, similar to certain COVID-19 vaccines. 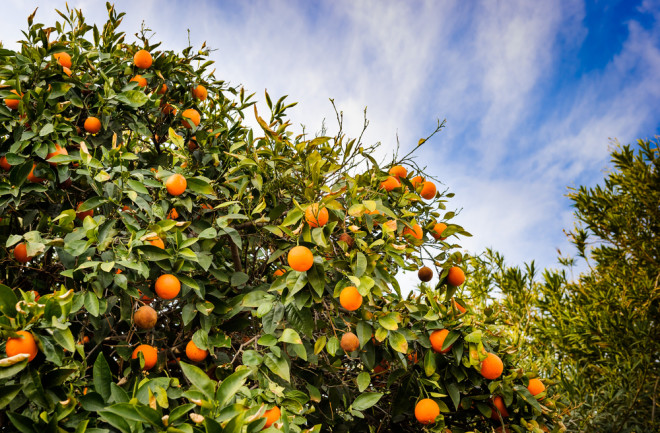 An orange tree in Florida, where citrus crops are at risk of various plant-targeting diseases. (Credit: Karen Grigoryan/Shutterstock)

A future where chocolate, wine and oranges can be afforded only by the wealthy certainly feels dystopian. But it could be a reality if some of our favorite crops succumb to plant diseases — a reality that is already taking shape in some parts of the world. To tackle the problem, Anne Elizabeth Simon, a virologist at the University of Maryland, is attempting to create what she calls a "vaccine" for crops that could protect our food supply.

Like the current approach to the COVID-19 pandemic, researchers have long dealt with pathogen spread among plants by quarantining infected flora to spare surrounding ones. And, depending on the type of disease, plants may also receive pesticides or antibiotic sprays.

But to offer more reliable protection, Simon is part of a team developing a vaccine-like solution as an efficient and relatively quickly deployable solution to preempt — or possibly cure — plant diseases.

Most of these diseases don’t have a simple treatment, and require several costly, time-consuming strategies to mitigate the diseases once they've spread. They can also be difficult to detect because, in some cases, several years pass before symptoms appear.

Of course, plant pandemics are no new challenge. In the first half of the 20th century, for instance, a disease caused by fungus killed more than 3 billion American chestnut trees. But overall, climate change, ramped-up global travel and neglect by governments and industry have combined to create a perfect pathogen storm that endangers our food supply. “The time has come to let people know that there are other pandemics going on,” Simon says. “There’s multiple ones happening with trees, and it’s going to lead to a very different world.”

Why Old Solutions Are No Longer Enough

Citrus trees have already grappled with multiple pathogens over the last few centuries, including the 1800s root rot epidemic and the citrus tristeza virus that cropped up in the 1930s. Most devastating of them all, huanglongbing (HLB) — also commonly called citrus greening — originated in China and has wreaked major havoc over the past two decades.

Between 2013 and 2018, China’s top-producing citrus region lost more than half of its acreage to HLB. By 2018, HLB had caused an 83 percent drop in Florida’s citrus production since 2003.

Shifting temperatures and humidity levels have also complicated the battle. They can impact both plant immunity and pathogen strength, for better or worse, because vectors thrive in specific conditions. This brings diseases to areas that weren’t previously suitable for them; for example, the bug that carries HLB will likely spread north of Florida as states warm to its liking.

Due to these compounding challenges, some growers have pursued additional products or changed course completely. Some small operations in Brazil and Mexico hit by citrus greening have already considered growing sugarcane to make up for economic losses. Florida farms have similarly opted for alternatives, planting crops like mini pumpkins and avocado in attempts to make up for lost income.

Where Tree “Vaccines” Come In

Simon joined the fight against plant pathogens by chance: While studying plant RNA viruses in her lab, she happened upon a surprising sample in a genetic sequence database that contradicted her 30 years of research.

It turned out to be a new type of virus-like RNA that she named iRNA. It shocked Simon because iRNA lacks certain genes found in all normal plant viruses, yet can still move between cells in a plant’s veins by attaching to plant-generated movement proteins.

By tweaking the iRNA to carry tiny fragments of a virus, it can provoke plant enzymes to chop up the harmful virus into little pieces, without causing damage to the plant. “This can be a vehicle, not just for one type of tree, but for many,” Simon says. “It’s all because of this very unusual, never-before-seen property.”

The iRNA sample was first discovered by University of California, Riverside researchers in the 1950s when it appeared in limequat trees. They found that the iRNA can infect many citrus species with very mild to zero symptoms. Yet its disease-eradicating properties were only recently discovered when Simon identified the missing genes that allow it to move through plant veins.

“This could become one of the important tools in the belt of the industry and farmers to keep citrus going,” says Georgios Vidalakis, a plant pathologist at the University of California, Riverside, and director of the Citrus Clonal Protection Program. “It looks very promising. Still, there is a lot of work to be done."

Eager to get the ball rolling, Simon founded a company called Silvec Biologics in 2019 and is working to develop a single-step vaccinelike preventative treatment that tricks trees into eradicating not only viruses that cause disease, but also fungi and bacteria — somewhat similar to how mRNA jabs force our immune systems to cook up COVID-19 antibodies.

Since October 2020, Silvec has run trials with UC Riverside’s Citrus Clonal Protection Program to test the iRNA vaccines in citrus trees. Researchers can customize the treatment to ambush different pathogens based on their genetic sequences. This has enabled Simon’s team to begin working on grapevine viruses and bacteria targeting apple trees, and they have also begun experimenting with protecting cacao trees from CSSV.

Because the trees containing the original iRNA sample have remained alive for more than 70 years, Simon says it suggests that the vaccine could possibly offer lifetime protection against several pathogens when put into newly planted trees — similar to giving children a standard set of shots. What’s less clear, however, is whether highly degraded trees that have been infected for several years can still benefit from the treatment.

Simon hopes that the iRNA therapy can save infected trees that don’t yet show symptoms of disease. It seems less likely for those with roots disintegrated by disease, like a growing number of Florida’s citrus trees. Even if the vaccine did work in those cases, she says, they would be too weak to recover.

How Science May Aid Ailing Plants

Simon’s team isn’t the only one developing novel techniques to fight devastating plant diseases. Some researchers have, for example, adapted relatively new technologies to take on these threats. In recent years, scientists have proposed genome editing techniques like CRISPR for this purpose. By manipulating specific portions of plant DNA, it could allow breeders and researchers to work more precisely when designing disease-resistant varieties.

And as a safer, more efficient treatment for citrus greening, UC Riverside geneticist Hailing Jin has developed an antimicrobial peptide that can be injected or sprayed in lieu of antibiotics or pesticides. Jin and her colleagues isolated the peptide from a type of greening-tolerant Australian limes, making it a natural plant product. In another nature-based solution, Vidalakis has worked on liquid fertilizer made from fermented food waste. It contains helpful bacteria that can boost crops' resistance to pathogens.

Ultimately, it will likely take a combination of approaches to keep our food system resilient to current and emerging diseases — just as we have combined masking and social distancing, along with various treatments and vaccines to work against COVID-19.

Yet if scientists, governments and growers don’t combine forces quickly enough, it’s possible that certain food production costs will skyrocket and affect consumer prices. Florida's orange per-box price, for example, rose by more than 90 percent between 2003 and 2018 (when adjusted for inflation). That’s why Simon says plant epidemics require a Manhattan Project of sorts, where scientists can bring their minds together and offer their individual expertise. Vidalakis agrees. “The clock is ticking and we won’t have decades to spend on this,” he says. “It has to happen soon.”