How Do *You* Spell Brain? [Science Tattoo] 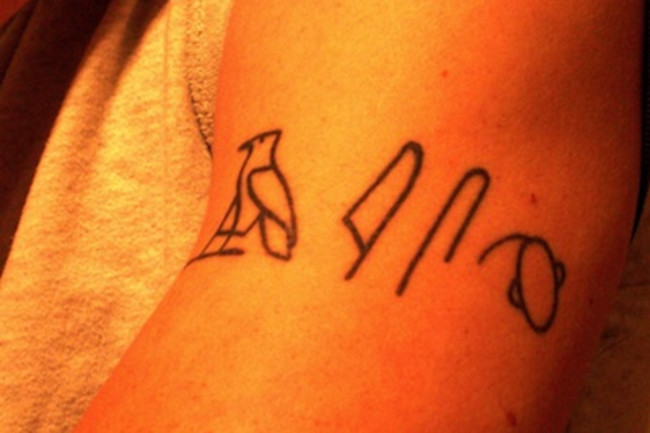 Tim writes, I'm a post-doctoral cognitive neuroscientist working in MR research at the University of Pittsburgh. I stumbled across the Science Tattoo Emporium and wanted to share my own science based ink.

The attached image shows my second tattoo and the most directly science-themed ink (although the others are also peripherally linked to the career I love so dear). The four hieroglyphic characters are the earliest written form of the word "brain" and are found in the Edwin Smith Surgical Papyrus. Dating back to seventeenth century BC Egypt, the papyrus is perhaps the first neurological case study describing the symptoms of head injuries and the odd fleshy matter that was often visible in the most gruesome of head wounds. These symbols and the story of the papyrus are the opening to the classic textbook "Principles of Neuroscience", which I first came across when taking an undergraduate course in 2000. In honor of starting my graduate research career in studying the brain, I got this tattoo while attending a neuroscience conference in NYC in 2002.

Anyway, hope you enjoy. Thanks for putting together the gallery that lets me know I'm not the only geek crazy enough to make his passion a permanent part of his body.Click here to go to the full Science Tattoo Emporium.