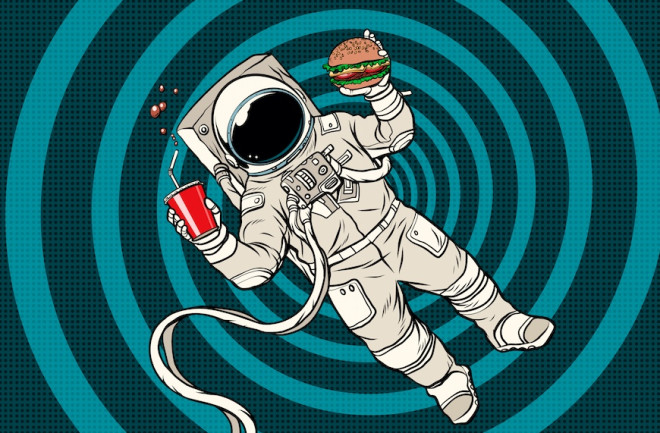 Food is key to our daily functions by fueling our activity and fortifying our bodies and minds. Most of us with access to various food sources, meanwhile, don’t need to worry about meal prepping quite as much as NASA. In space, where astronauts confront drastic environmental and physical changes, the need for safe, nutritious and energy-laden food is particularly vital to overall health.

“We have crews that need to perform and be healthy at these extremely high levels for extremely high-stress situations,” says Grace Douglas, lead scientist for NASA’s Advanced Food Technology research group at the Johnson Space Center. “Food impacts every aspect of physiology, and food can either make you very healthy or can make you very sick.” A robust and nutritious food system for space travel, she says, can have positive outcomes for a space crew’s performance and general wellbeing.

But for those traveling far from Earth’s food supply, it’s particularly challenging to produce, transport and prepare healthy food. Beyond providing energy and nourishment, space meals must be palatable and stay safe for consumption for months — or even years.

Above all, space food must provide adequate energy to fuel astronauts on their grueling missions, according to NASA. Without a sufficient caloric intake (which exceeds earthly needs and ranges between about 2,700 to 3,700 daily calories) astronauts risk losing body mass — a key marker of nutrition. Historically, astronauts have consumed as little as 60 percent of their recommended calories during space missions. Data from more recent missions, however, show that more space travelers are now eating enough and are therefore more likely to boost their nutrient levels.

Much like on Earth, a lack of certain vitamins and nutrients can be detrimental to a person’s health, including their heart, brain and immune system. In microgravity environments, proper nutrition can combat the resulting degradation of bones and muscles. For example, vitamins D, K and C aid in synthesizing calcium into bone. When combined with exercise, they help astronauts retain bone and muscle strength against the deleterious effects of microgravity.

Meanwhile, dietary supplements like iron, omega 3 fatty acids and B12 can make up for dietary deficiencies and abate the microgravity-induced deterioration of eyesight, muscle mass and blood oxygen levels. “In general, if it's good for you on Earth, it's going to be good for you on spaceflights,” Douglas says.

After decades of nutritional studies and food technology advancements, NASA has shifted focus away from supplements and dietary formulas toward providing as many nutrients from fruits and vegetables as possible. Food derived from a variety of natural sources can provide a variety of phytochemicals — or biologically active compounds — that you can't get from dietary supplements.

It can be difficult to rely heavily on fruits and vegetables as a space food source because, while they can be packed with nutrients, they don’t contain many calories. This poses an issue for spaceflight, where cargo room is precious.

To get food to an acceptable mass and increase its shelf life, the NASA food systems team uses technology like freeze drying and retort thermal sterilization — a process commonly used in the canning industry to sterilize food by heating it after it’s been packaged. This helps to preserve the food and reduces its bulk. Teams then store it in the space vehicle within flexible, lightweight packaging that looks a lot like the tuna packets sold in grocery stores. “The same processes that were good 30 years ago are still the ones that are best today for producing space food,” Douglas says.

The Psychology of Space Meals

NASA can’t merely consider health when designing space food, though: The nutritional value of a meal only goes so far it doesn’t appeal to astronauts. Despite common conceptions, high-performing individuals like astronauts don’t necessarily eat anything that’s offered to them just because it’s safe and nutritious, Douglas says.

Rather, she and her colleagues aim to offer astronauts several meal options to avoid menu fatigue. Such variety also provides psychological health benefits. “Food becomes more important with mission duration, isolation and confinement because it's one of the only familiar things that they have,” Douglas says.

Part of what makes food so delicious is its degree of textural variety. The crunch of a tortilla chip contrasted with creamy guacamole stimulates many of our senses and signals that the food is fresh and satisfying. A new, popular food item among astronauts is a freeze-dried mango salad that includes a crunchy nut — a texture that can be hard to achieve with freeze-dried food.

In addition to nutrition and taste, space food scientists must ensure their products remain shelf stable for months, sometimes years. NASA periodically sends vehicles to refresh the supplies on the International Space Station, sometimes including produce and new food packs. But for longer missions outside of near-Earth orbit, food may have to last for up to around five years. That’s a long time to keep freeze-dried fruit salad and hamburgers tasting fresh.

Preparing For the Next Mission

As space organizations look ahead to long-duration missions, like sending people to Mars and establishing a sustained presence on the moon, it will be key to craft a sustainable food source that doesn’t require resupply missions.

To achieve this, NASA scientists are studying the best ways to grow crops in microgravity. On the International Space Station, astronauts have successfully grown a variety of leafy greens and flowers in the Vegetable Production System, known as Veggie. As researchers continue to devise safe and effective space agriculture techniques, the fresh produce could serve as both a sustainable food source and a highly nutritious supplement to their packaged food. And eating a fresh leafy green, rather than one rehydrated from a metallic pouch, could help them feel connected with the distant green planet they call home.