How do Planets Form? NASA Wants Your Help Finding Out 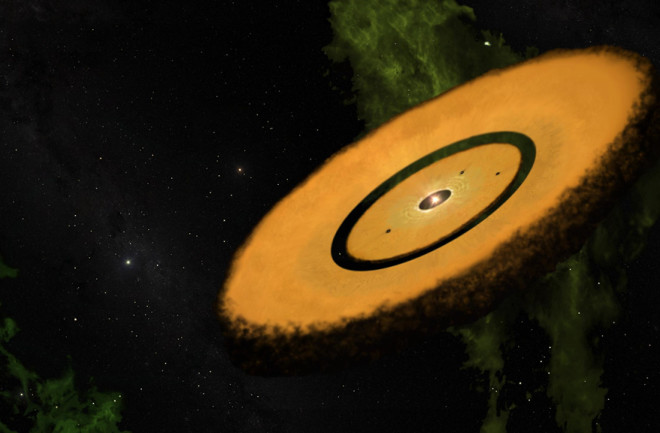 Astronomers think giant planets like Jupiter and Saturn should form in just a few million years, wiping out the planetary disks they emerged from. However, citizen scientists recently discovered that some disks can last 10 times longer than that, earning the title Peter Pan disks, because they look younger than they are. (Credit: Jonathan Holden/NASA).

How long does it take planets to form in solar systems? Since 2014, tens of thousands of volunteers have helped NASA try to answer this question by looking at telescope images of solar systems as their protoplanetary disks are still forming.

NASA’s Disk Detectives is a citizen science project that enlists members of the public to help analyze data. It was designed to discover disks of gas, rock and dust circling other stars. These structures appear early on in planet formation. So, peering into a planetary disk is like looking at a baby photo of a future solar system.

“We’re trying to understand how long it takes for planets to form,” astrophysicist Marc Kuchner said in a NASA release. Kuchner is the Disk Detective project lead at NASA’s Goddard Space Flight Center in Greenbelt, Maryland, and the Citizen Science Officer for NASA's Science Mission Directorate. “Tracing the evolution of these disks is the main way that we know how long planet formation takes.”

The project asks volunteers to look at short, 10-second videos strung together from existing NASA telescope images. As citizen scientists collect candidates, other telescopes follow up on the discoveries.

Ultimately, astronomers' goal is to use Disk Detectives to learn about many aspects of how planets are born. And users of all ages, including kids and parents, can learn along with them at home. By joining in this experiment, users get to follow along with the educational resources, take part in the active forum discussion board and hear about discoveries on a blog provided by NASA on the project page.

Since it launched in 2014, the citizen science project has already made more than 50,000 disk discoveries. And of the 30,000 people who signed up to help, 15 super-contributors actually ended up as co-authors on science papers with the NASA team.

This artist's illustration shows the young brown dwarf W1200-7845, which could help astronomers discover whether these strange objects form more like stars or more like planets. It also appears to have a disk capable of forming planets. (Credit: NASA/William Pendrill)

One of the most interesting finds so far was announced at the American Astronomical Society meeting in June, where the Disk Detectives team revealed that volunteers had spotted a new brown dwarf just 100 parsecs from our sun.

Brown dwarfs are too small to be stars and too large to be planets, and because they don’t shine, they’re very hard to see. However, scientists think they’re extremely common, so new finds are exciting. After volunteers flagged the object in Disk Detective, astronomers conducted follow up observations using the massive 6.5-meter Magellan telescopes at Las Campanas Observatory in Chile. They discovered that the object is in an extremely close-by group of stars, making it the closest young brown dwarf known.

And now astronomers aim to take advantage of that close proximity to get even better pictures of the object using still bigger observatories, like the Atacama Large Millimeter Array (ALMA), which combines 66 large radio dishes into a single telescope. ALMA could reveal intimate details of the brown dwarf’s disk, helping astronomers understand these ordinarily hard-to-see objects. Already they can see that it appears to have the kind of disk that can form planets.

“When it’s this close, we consider it to be within the solar neighborhood,” study author Maria Schutte, a grad student at the University of Oklahoma, said in a media release. “That proximity is really important, because brown dwarfs are lower in mass and inherently less bright than other objects like stars. So the closer these objects are to us, the more detail we’ll be able to see.”

One of the lingering mysteries about brown dwarfs is whether they form more like planets or more like stars, the team says. And this latest find's combination of youth and proximity could help provide an answer.

Among their finds, in 2016, volunteers also uncovered a totally new kind of young planetary system. They call them Peter Pan disks “because they apparently refuse to grow up,” the scientists say.

Astronomers suspect that protoplanetary disks only last for a few million years, and so the biggest planets, like Jupiter and Saturn, must form very fast. But as volunteers poured over the images from Disk Detectives, they started finding these Peter Pan disks that appeared as much as 10 times older than that. It wasn't just a fluke find, either. The discovery of four new Peter Pan disks was published in The Astrophysical Journal back in February.

And in a follow up study published this summer, astronomers looked at "Neverland's parameters," revealing that the disks form far from other stars in lonely systems. They also begin life much bigger than the average planetary disk, according to research published in the journal Monthly Notices of the Royal Astronomical Society: Letters.

NASA recently released Disk Detective 2.0 with 150,000 new images, so astronomers are eager to see what fresh finds volunteers will discover this time.

Note: This project is a SciStarter Affiliate. In your SciStarter dashboard, add your Zooniverse username under "Info & Settings" to earn credit for your participation.