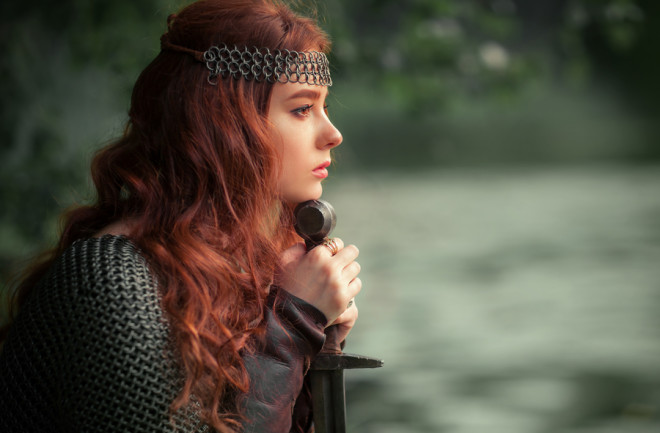 When you imagine life for ordinary people in ancient Britain, you’d be forgiven for picturing quaint villages where everyone looked and spoke the same way. But a recent study could change the way historians think about early medieval communities.

Most of what we know about English history after the fall of the Roman Empire is limited to archaeological finds. There are only two contemporary accounts of this post Roman period. Gildas (sixth century) and Bede (eighth century) were both monks who give narrow descriptions of invasion by people from the continent and neither provide an objective account.

My team’s study, published in Nature, changes that. We analysed DNA from the remains of 460 people from sites across northern Europe and found evidence of mass migration from Europe to England and movement of people from as far away as West Africa. Our study combined information from artefacts and human remains.

That meant we could dig deeper into the data to explore the human details of migration.

Journey into England’s past

This paper found that about 76% of the genetic ancestry in the early medieval English population we studied originated from what is today northern Germany and southern Scandinavia – continental northern European (CNE). This number is an average taken from 278 ancient skeletons sampled from the south and east coasts of England. It is strong evidence for mass migration into the British Isles after the end of Roman administration.

One of the most surprising discoveries was the skeleton of a young girl who died at about ten or 11 years of age, found in Updown near Eastry in Kent. She was buried in typical early seventh-century style with a finely made pot, knife, spoon and bone comb. Her DNA, however, tells a more complex story. As well as 67% CNE ancestry, she also had 33% West African ancestry. Her African ancestor was most closely related to the modern day Esan and Yoruba population in southern Nigeria.

Evidence of far-reaching commercial connections with Kent at this time are known. The garnets in many brooches found in this this region came from Afghanistan for example. And the movement of the Updown girl’s ancestors was likely linked to these ancient trading routes.

Keeping it in the family

Two women buried close by were sisters and had predominantly CNE ancestry. They were related to Updown girl – perhaps her aunts. The fact that all three were buried in a similar way, with brooches, buckles and belt hangers, suggests the people who buried them chose to highlight similarities between Updown girl and her older female relatives when they dressed them and located the burials close together. They treated her as kin, as a girl from their village, because that is what she was.

The aunts also shared a close kinship with a young man buried with artefacts that implied some social status, including a spearhead and buckle. The graves of these four people were all close together. They were buried in a prominent position marked by small barrow mounds (ancient burial places covered with a large mound of earth and stones). The visibility of this spot, combined with their dress and DNA marks these people as part of an important local family.

The site studied in most detail – Buckland, near Dover in Kent – had kinship groups that spanned at least four generations.

The Buckland family tree. On the left-hand side is the plan of the cemetery and the location of each grave, illustrated by generation. On the right is the family tree with artifacts added. Duncan Sayer and Joscha Gretzinger, Author provided

One family group with CNE ancestry is remarkable because of how quickly they integrated with western British and Irish (WBI) people. Within a few generations, traditions had merged between people born far away from each other. A 100% WBI woman had two daughters with a 100% CNE man. WBI ancestry entered this family again a generation later, in near 50/50 mixed-ancestry grandchildren. Objects including similar brooches and weapons were found in graves on both sides of this family, indicating shared values between people of different ancestries.

This family was buried in graves close together for three generations. That is until a woman from the third generation was buried in a different cluster of graves, to the north of the family group. One of her children, a boy, died at about eight to ten years of age. He was buried in the cluster of graves that included his maternal grandparents and their close family and she laid her youngest child to rest in a grave surrounded by her family. But when the mother died, her adult children chose a spot close to their father for her grave. They considered her part of the paternal side of the family.

Another woman from Buckland had a unique haplotype, a set of DNA variants that tend to be inherited together. Both males and females inherit their haplogroup from their mothers. So her DNA suggests she had no maternal family in the community she was buried with.

The chemical isotopes, from her teeth and bones indicate she was not born in Kent but moved there when she was 15-25 years old. An ornate gold pendant, called a bracteate, which may have been of Scandinavian origin, was found in her grave.

This suggests she left home from Scandinavia in her youth, and her mother’s family did not travel with her. She very likely had an exogamous marriage (marriage outside of your social group).

What is striking is the physical distance that this partnership bridged. This woman travelled 700 miles, including a voyage across the North Sea, to start her family.

These people were migrants and the children of migrants who travelled in the fifth, sixth and seventh centuries. Their stories are of community and intermarriage. The genetic data points to profound mobility within a time of mass migration and the archaeological details help to complete the family histories. Migration did not happen at the same time, nor did it all come from the same place. Early Anglo-Saxon culture was a mixing pot of ideas, intermarriage and movement. This genetic coalescing and cultural diversity created something new in the south and east of England after the Roman empire ended.

Duncan Sayer is a Professor in Archaeology, University of Central Lancashire. This article is republished from The Conversation under a Creative Commons license. Read the original article.