y picture detected in Argentineans underscores the need to apply ASDM from all three genetic systems to infer geographic origins and genetic admixture. This applies to all worldwide areas where people with different continental ancestry live geographically close together.

I’ve outlined a reasonably plausible model for how this situation came out before. Strong male bias in European settlement and immigration. This would naturally result in the persistence of maternal indigenous ancestry, while at the same time contributing to the dominance of European ancestry. Dienekes points out:

If one assumes serial matings between European men and mixed women the uniparental lineages would underestimate the total ancestral contribution of Europeans, as the “mixed” women themselves progressively became more European in ancestry. As for the African lineages, the proportions are small, but one could envisage scenarios whereby slave women have mixed-race children, and for whatever reason their sons marry out and reproduce to a greater extent than their daughters. This would eliminate African mtDNA from the population, but maintain the total ancestral contribution. Let’s see how the sample above relates to other world populations: 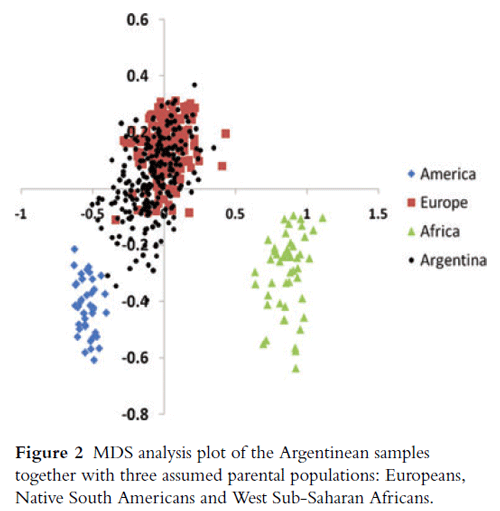 The people of Argentina are mostly European in ancestry, so these results match our expectation. Now let’s visualize it in another way: 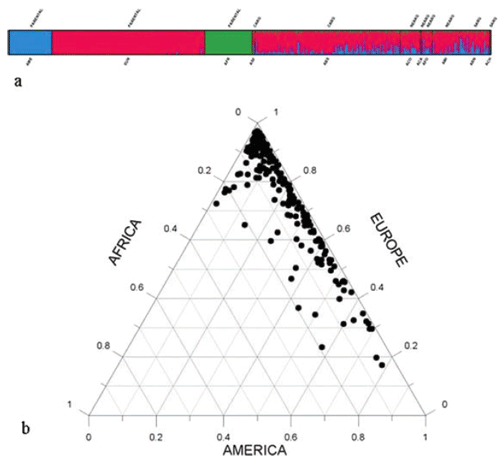 The Structure bar plot is small, but you can see the intra-population variance among Argentineans. A substantial proportion of the population of Argentina arrived within the last 100 years. But, a far smaller number of Argentineans have only ancestry from within the last 100 years. In other words, to have exclusively grandparents or great-grandparents who were only immigrants or only the children of immigrants must be relatively rare, looking at the detectable proportion of indigenous ancestry across most of the population. Since Argentina was a mixed-race society before mass immigration, as long as the roots of any given individual goes back to the period before mass immigration than it is likely that they will have some non-European ancestry. Of course this doesn’t really change anything. I have known of individuals who look European with less than 25% Native American ancestry who identify as Native American. I have known individuals who show their Native American ancestry on hindsight who don’t identify as such. To say that racial identity is a social construction is ludicrous on the boundaries. An blonde Swede would not pass for a Sinhala. But there are plenty of gray lands in between, and the populations of Latin America often inhabit those domains. Someone who in Brazil identifies as whitecould be identified as African American in the United States. Someone whose forebears were part of the white racial aristocracy of Cuba two generations ago may now self-identify as a Person of Color in the United States (while at the same time being a participant in the racial discrimination which Afro-Cubans still suffer within the greater Cuban community. The relevance for the United States is clear. I think the Census projections underplay the likely role of admixture in “whitening” the population. Though white-black biracial actors can not plausibly play white characters in American culture, white-Asian actors do. Those of partial Hispanic ancestry have long passedfor their career’s sake (and sometimes later come back out when social norms changed). Therefore, I think America may have a non-Hispanic white majority just a little longer in its own mind than what the genes and projections might tell us…. (the countervailing trend would be the tendency of people will little, or rumored, Native American ancestry to identify as Native American) Citation: Annals of Human Genetics doi:10.1111/j.1469-1809.2009.00556.x