History is Made: New Horizons Skims Past Pluto 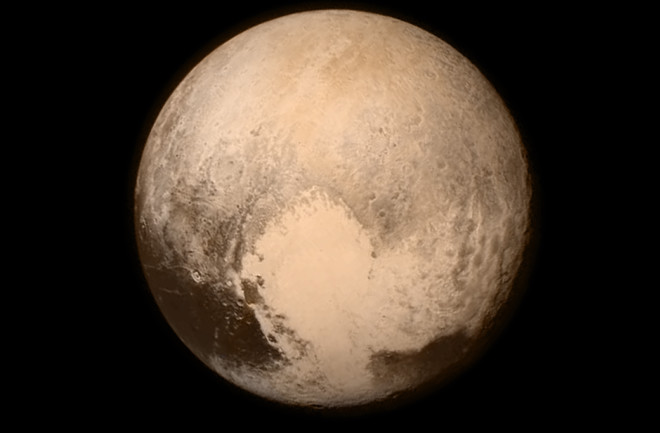 This is the last image taken by NASA's New Horizon's spacecraft before it made its closest approach to Pluto. The piano-sized probe was speeding toward the planet at 30,000 miles per hour and was 476,000 miles away. (Source: NASA)

After a journey of 10 years and three billion miles, NASA's New Horizons spacecraft has made its closest approach to Pluto. I'm not saying "successfully" because we don't yet know how well the spacecraft has fared during its close encounter. We'll know by about 9 p.m. EDT when New Horizons is supposed to phone home. But scientists do know that the piano-sized probe skimmed just 7,750 miles above the surface of the far away world at 7:49 EDT today — as planned — and is now speeding ever outward into the icy Kuiper Belt. When I say speeding, I mean it: At closest approach, New Horizons was zipping along at 30,000 miles per hour, making it the fastest spacecraft ever launched. To appreciate what a remarkable achievement New Horizons' close encounter with Pluto truly was, consider this, from NASA:

New Horizons’ almost 10-year, three-billion-mile journey to closest approach at Pluto took about one minute less than predicted when the craft was launched in January 2006. The spacecraft threaded the needle through a 36-by-57 mile (60 by 90 kilometers) window in space -- the equivalent of a commercial airliner arriving no more off target than the width of a tennis ball.

When New Horizons reestablishes contact tonight, it is scheduled to begin sending a trove of scientific data back to Earth — 10 year's worth. That's so much that it will take 16 months to complete the data transfer! Then on Wednesday afternoon, NASA should release processed images taken during the spacecraft's closest approach. As we wait for New Horizons to reestablish contact tonight, we can enjoy the spectacular close-up image it snapped of Pluto when it was 476,000 miles from the surface. It was the final image sent back before the spacecraft made its closest approach. The rusty tones come from low resolution color information acquired by an instrument called Ralph (the name is a reference to the Honeymooners television show). Here is NASA's description of what you're seeing:

This view is dominated by the large, bright feature informally named the “heart,” which measures approximately 1,000 miles (1,600 kilometers) across. The heart borders darker equatorial terrains, and the mottled terrain to its east (right) are complex. However, even at this resolution, much of the heart’s interior appears remarkably featureless—possibly a sign of ongoing geologic processes.