Rapper Dr. Dre is planning on an instrumental album based on the planets! From Vibe magazine: 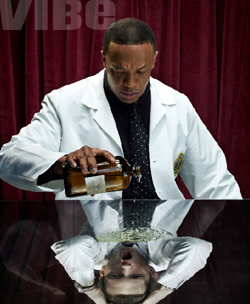 You mentioned a hip-hop album without rapping. Will we ever hear a Dr. Dre instrumental album? Oh yeah, that’s in the works. An instrumental album is something I’ve been wanting to do for a long time. I have the ideas for it. I want to call it The Planets. I don’t even know if I should be saying this, but [bleep] it. [Laughs.] It’s just my interpretation of what each planet sounds like. I’m gonna go off on that. Just all instrumental. I’ve been studying the planets and learning the personalities of each planet. I’ve been doing this for about two years now just in my spare time so to speak. I wanna do it in surround sound. It’ll have to be in surround sound for Saturn to work.

Hmmm, interesting. This sounds pretty cool, though I'm a little concerned with what he means by "the personalities of each planet". In today's culture that could mean anything... but then, Gustav Holst wrote a classical suite using the same idea, and it is to this day one of the most deservedly popular pieces of music ever written. I'm usually willing to cut musicians a little slack, since it's art and open to interpretation. And if it brings more people into the astronomical fold, then more power to him. I'll be curious to hear it when it comes out! Tip o' the conductor's baton to Ryan Gagne.