Vampire lore comes from a time when people didn't understand certain illnesses, which led to superstition around wooden stakes, garlic and bats. 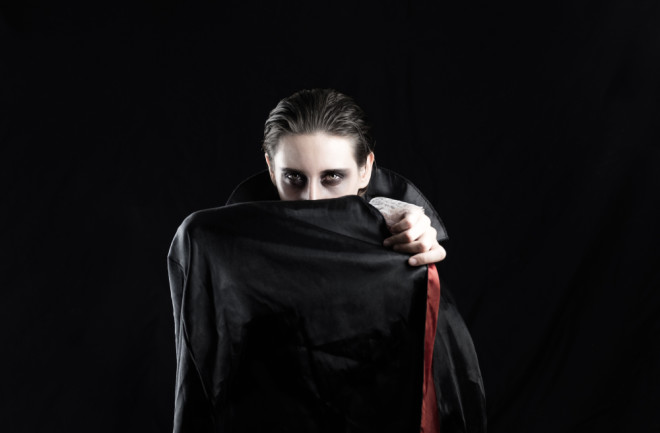 While you may think of wooden stakes, sunlight that burns and bats when you think of vampires, you probably wouldn't think of a padlock and scythe.

But the findings of an alleged "vampire" in Poland shows there was some paranoia around the paranormal. The remains of a 17th-century woman with a scythe across her neck and a padlock clamped on her toe indicate she may have been accused of being a witch or a vampire. She was buried with these precautions to ensure that she, the ghost or spirit of this woman, would not come back from the grave.

Before scientific and medical advancements, it was common for people to accuse those of witchcraft or vampirism based on unknown illnesses — or for simply being different. While science and medicine has improved, the legends around these vampire stereotypes still remain. Here is how they originated.

The word "vampyr" is a Slavic word for vengeful ghost, according to Phil Stevens, associate professor of Anthropology Emeritus at the University of Buffalo. People once believed that the "vampyr" — a name to some that is synonymous with vampire or witch, according to Stevens — would fly into a sleeping victim's room at night and suck out their life force.

A victim would look like they were wasting away or being consumed. As modern medicine developed, we now know that people were actually suffering from tuberculosis. However, at that time, people were unaware of how diseases spread, which led to the belief in witches and vampires.

As a victim died, their family and members of the surrounding community feared that the spirit would return to haunt them. They thought the victim would have some sort of unfinished business and would attack their family, or the people close to them. Their suspicions were often confirmed because of how the bodies decayed.

"If you bury a body fairly shallowly, it is possible for the body, because of the methane gas that is created, to rise up from the grave if it's not deep enough," says Annalisa Castaldo, an associate professor of English at Widener University. "So, people will bury a dead body and come back a couple days later, and the body appears to be trying to get out of the grave."

People then took measure to prevent what they thought was a vengeful spirit from rising from the dead. "They may exhume the body and drive a stake through it to keep it in place. And rebury it," says Stevens.

Stevens says people might have done this to a fresh corpse to prevent it from rising if there was some indication that this person died with unfinished business.

The notable historical figure, Vlad III Dracula (Tepes) — Vlad the Impaler, has also been a significant inspiration for vampire lore. Vlad the Impaler earned his name from the gruesome way he killed his enemies in 15th-century Europe. A scourge to his foes, Vlad was a savior to his people, dubbed the "Hero of Bucharest," according to Stevens. When the Ottoman army was laying siege to Bucharest, Vlad would impale his prisoners — who were still alive — on the city's ramparts to discourage more attacks, says Stevens. Vlad was also known to leave impaled prisoners on battlefields to discourage followers.

Around this time, the first printing presses in Europe were beginning to operate, and tales of Vlad the Impaler and his bloodthirsty deeds began to spread, many of which Stevens says were exaggerated. Gruesome stories in Germany often varied from the lesser-violent stories in Russia and Romania.

However, it is believed that Bram Stoker drew inspiration from Vlad the Impaler for his novel Dracula.

"His father was a knight of the order of the dragon, which is 'Dracul,'" Stevens says. Vlad, his son, was then referred to as "Dracula," meaning the son of Dracul. It is also believed that Vlad the Impaler was born in Transylvania — the home of Stoker's Dracula — however, there is no evidence Vlad the Impaler lived there. However, his father, Vlad II, did own property in Transylvania.

A vampire's desire for blood may stem from multiple factors. One factor, as mentioned above, is that a vampire would allegedly attack their victims at night, sucking out their life force.

"Blood is the life force," Stevens says. "Blood is a liquid, but the life force is mystical. And blood is both." Blood, according to Stevens, is universally symbolic. Red liquids, like wine, are often associated with blood.

Another factor is based on a woman named Elizabeth Báthory. She was a Hungarian noblewoman whose family controlled Transylvania, and allegedly bathed in the blood of maidens. Báthory was accused of murdering over 600 people with the help of her servants.

She was referred to as the "Female Dracula," though her actions have likely been greatly exaggerated.

Vampire bats inhabit Central and South America and feed entirely on blood, the only mammal to do so. This earned them the apt name. However, the bat-vampire connection stems from the idea of the familiar. Stevens discusses how in some cultures, witches and vampires are synonymous.

"Witches [vampires] have alter-egos," Stevens says. "The English word for this character is the familiar."

Stevens says it's like a witch's pet, though more than a pet. This animal shares a bond with the witch or vampire's power. They're typically nocturnal animals that can be considered dangerous, like an owl or a bat.

"There is a belief that witches can turn themselves into this creature or send this creature out on errands of evil," Stevens says. This way, the witch or vampire can have the perfect alibi while still conducting their evil.

There are other classic vampire symbols, such as garlic that repels vampires and their inability to walk in sunlight.

Before modern medicine, those with lupus or porphyria may have been considered vampires. Lupus — an autoimmune disease — can cause photosensitivity in about two-thirds of its patients, making it challenging to be out in the sun.

Porphyria — a group of blood disorders caused by unnatural chemical build-ups — can also cause photosensitivity in patients. Garlic also is connected to patients with porphyria. While garlic contains a natural antibiotic that can improve the health of those who are ill, garlic actually makes some porphyria symptoms worse. Porphyria can make a patient appear pale and shrink the gums around their teeth, making it seem like the patient's teeth are growing. Patients wouldn't eat garlic to avoid this, which encouraged the belief they were vampires.