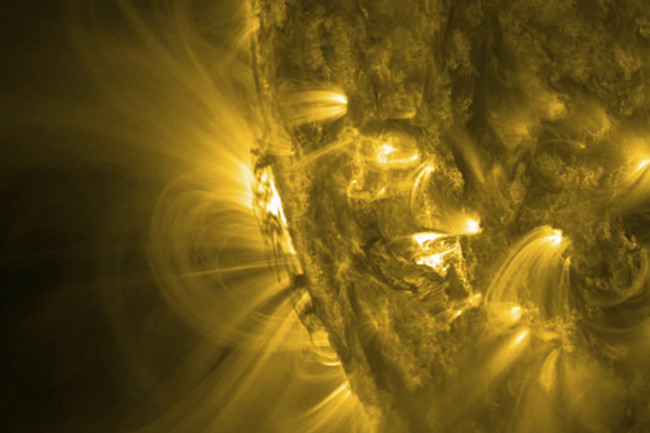 An image of the sun's surface captured in March by NASA's Solar Dynamics Observatory. (Image: NASA Goddard Space Flight Center) It never ceases to amaze me that we have instruments capable of showing us what it's like on the surface of the sun. The Solar Dynamics Observatory is one of them, and in March, it returned a series of images that NASA has made into a spectacular movie. Click on the image above to see the full animation. The sun is made mostly of plasma — a soup of electrons, as well as atoms that have lost their electrons, laced with magnetic fields. In this image, and the animation as well, the presence of magnetic fields is visible in the form of gigantic loops leaping and reconnecting with the surface of the sun. Plasma is cooler, and therefore darker. The Solar Dynamics Observatory, launched on Feb. 11, 2010, is designed to help scientists gain a better understanding of how the Sun influences the Earth and its nearby space environment. It focuses on the atmosphere of the sun, called the corona. Right now the sun is relatively quiescent. In late March and early April, there were some glimmers of increased activity, with a few flares and ejections of material from the corona. But in the last few days the sun has pretty much been napping, with very little activity. One forecast calls for relatively low activity through late April.