Hawking: If Humans Survive a Couple Centuries, We'll Get Off This Rock 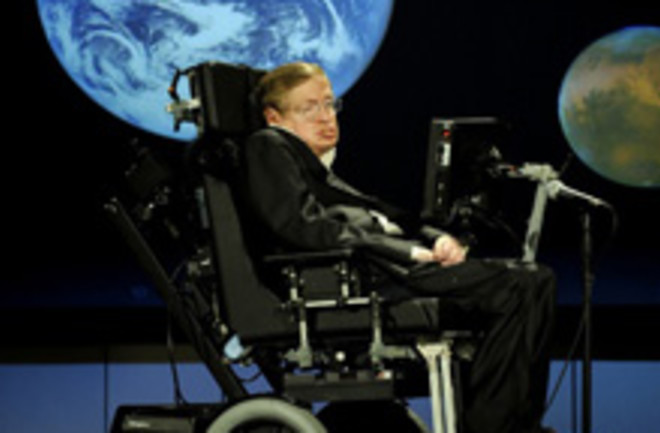 Listen, people of Earth: Everything's going to be fine. All we have to do is survive another century or two without self-destructing as a species. Then we'll get off this rock, spread throughout space, and everything will be all right. If this is not your idea of "optimism," then you are not Stephen Hawking. The esteemed physicist garnered headlines, and some eye-rolls, after telling Big Think last week that humanity needs to leave the Earth in the future or face extinction.

He's not knocking climate scientists' attempts to figure things out on Earth--he's just thinking long term. "There have been a number of times in the past when our survival has been touch-and-go," explains Hawking at Big Think, mentioning the Cuban Missile Crisis, and "the frequency of such occasions is likely to increase in the future.... Our population and our use of the finite resources of the planet earth are growing exponentially along with our technical ability to change the environment for good or ill," while "our genetic code still caries our selfish and aggressive instincts" [The Atlantic].

because they could come and wipe us out, the physicist's latest warning makes it feel like he's increasingly a member of the gloom-and-doom crowd. But not so. He's just the kind of person who thinks on the long, long term. Let's jump back to another publicly engaged scientist: Carl Sagan's message in Cosmos that the stars await... if we don't destroy ourselves. Sagan was pushing urgency and vigilance, not gloominess. The same, I think, is true of Hawking—it's why he calls himself an "optimist" despite his dire warnings of treacherous times ahead. Indeed, he says, if humanity can just get past the next 200 years without driving itself to extinction, then we're good to go. Once we spread to different locations in space, no event contained to a single world—even a catastrophic one like all-out nuclear war or a massive asteroid strike—could do in the species by itself. Hawking concludes the Big Think message about the necessity of a human future in space by saying, "That is why I'm in favor of manned, or should I say 'personed', space flight." That is: Putting people back on the moon or take them to Mars wouldn't be just a vainglorious gesture. The next phase of humanity demands it. He's far from the only one thinking far into the future. Take DISCOVER blogger Phil Plait

, who, in his book Death from the Skies!

, discusses audacious plans for our descendants to take way, way down the line to survive the slow dying and then death of the sun. (For a culture so plugged into now, it seems laughable to consider something billions of years down the line. But where Hawking may be proven wrong in his 100-200 years statement, he is clearly correct about the options for humanity's long-term future: We'll either leave the Earth or die before we get the chance.) Or, if you want to go all the way to the far end of the optimism spectrum, take another future-obsessed theoretical physicist: Michio Kaku

, whom I interviewed about his TV show Sci-Fi Science

for the September issue of DISCOVER, on newsstands now. The outline of a Type I, or global, civilization is now emerging on the Earth, he says, with the Internet and even type I sports—like the FIFA World Cup. And whether or not you agree humans are doomed if they don't leave the Earth for points beyond, he believes our future is out there. "It's not guaranteed we'll [even] hit Type I," he says. "But I'm optimistic." Related Content: 80beats: Stephen Hawking, For One, Does Not Welcome Our New Alien Overlords

DISCOVER: Inside the World of Stephen Hawking

Bad Astronomy: In Which I Disagree With Stephen Hawking

60 Years Ago, Alan Shepard Became the First American in Space